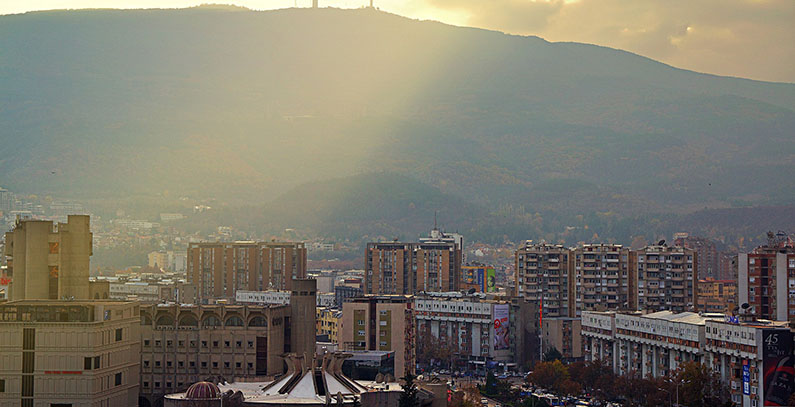 Local authorities in North Macedonia have started implementing the recommendations the government passed at the end of last year for cases of extreme air pollution. Skopje and Tetovo have just triggered the measures after official data showed the concentration of PM10 particulates was above 175 micrograms per cubic meter for two days in a row.

The country’s media, including national news agency MIA, reported the capital abolished construction work, doubled public parking prices and said public transportation is temporarily free. Skopje has lately intensified inspections and measured air pollution at different facilities and called on state institutions to cover the places they are responsible for.

Polluting industrial systems can be ordered to slash capacity utilization by as much as 50%, though heating and electricity production are excluded.

Vehicles leaving construction sites have been checked as their wheels must be washed and their loads must be covered with tarpaulin, the city officials stressed. They tasked the local utility company with additional washing at main boulevards and advised individual municipalities to do the same for smaller streets.

Goods suppliers are also under scrutiny and Skopje asked the police to help with emergency checks into licenses.

The city’s decision makers urged public employees to use public buses. They also said heads of municipalities should look into the operations of firms handling waste rubber and oils.

Driving lessons were limited from 9:30 to 14:30 and after 18:00. The police should control the ban of large freight trucks in the center and step up exhaust gas measuring, according to the city council.

In the guidelines for events of excessive air pollution, the cabinet said all employers should allow pregnant women, people older than 60, asthma patients and those with a history of heart attacks and strokes to abstain from work. Persons responsible for outside activities should work only from 11:00 until 17:00.

There shouldn’t be any public events in the open. The capacity of emergency medical services and house calls by doctors and nurses should be increased. State and local institutions and government-controlled enterprises need to cut the use of the cars they own by as much as half.

When PM10 concentration is above 175 micrograms per cubic meters for two days in a row, there shouldn’t be any public events in the open until the indicator drops

Older people living alone or in need must be given support and medical and social services have the duty to find shelters for the homeless.

The people in Balkan cities have been suffering from drastic levels of fine particular matter in the past months. The harmful dust launched locations like Sarajevo, Belgrade and Skopje to the top of global lists. Also, monitoring has been scaled up and data has become more accessible and accurate.

Of note, deputy minister of environment and spatial planning Jani Makraduli has claimed “not one institution” will be polluting the air in 2024. He stated that all recommendations from environmental organizations are accepted. The official said the academic community and the opposition are welcome to participate in the efforts and cited the example of developed countries like Sweden, Denmark and the United Kingdom.

He also announced the start of a subsidy program for 10,000 households in Skopje, Tetovo, Bitola and Kichevo. Grants of EUR 1,000 each were secured for the switch from heating on wood to inverter air conditioners and the official noted those with low incomes have priority.