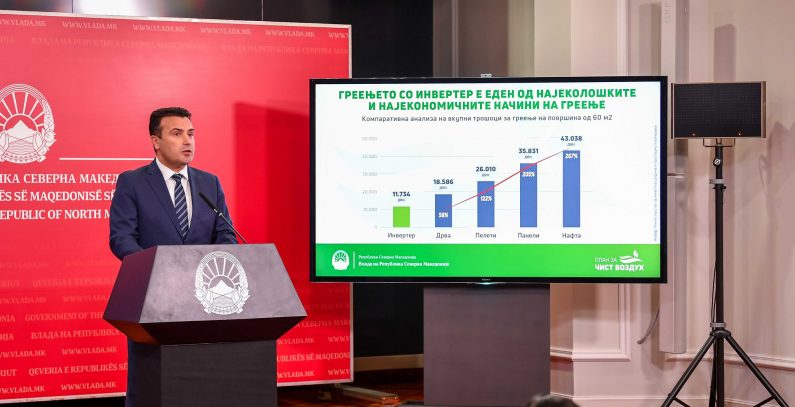 ESM has set aside the EUR 10 million for the first program phase, with 10,000 households in the most polluted Macedonian cities – Bitola, Kičevo, Tetovo, and Skopje – to receive EUR 1,000 each to help them buy inverter air conditioners and stop burning fuels with high CO2 and harmful particulate matter (PM) emissions, according to the Government of North Macedonia.

These fuels include wood, coal, and oil, which people burn in inefficient furnaces and stoves, contributing to major pollution levels in winter months.

A study conducted by the Finnish Meteorological Institute (FMI) as part of a twinning project with the Ministry of Environment and Physical Planning has confirmed that 90% of PM emissions in North Macedonia is caused by heating.

Environmental activists, however, took to Twitter to warn that it would be more appropriate for the Energy Efficiency Fund to finally start functioning than to award subsidies for the procurement of inverter air conditioning, whose use benefits the electricity market.

Davor Pehchevski of CEE Bankwatch Network said that a large amount of money will be disbursed in only four cities and end up in the pockets of a few home appliance vendors, without so much as analyzing whether this would be a discriminatory measure or whether it would distort the market.

Skopje has already undertaken a number of measures over air pollution, such as supplying classrooms with air purifiers.

Data concerning mean concentrations of PM10 and PM2.5 for 2018, published earlier by the World Health Organization (WHO), rank Skopje as Europe’s most polluted capital city, with PM2.5 values four times the recommended levels.