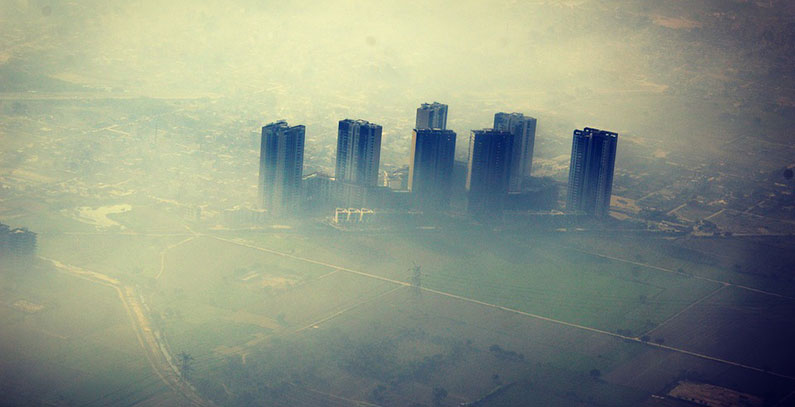 Concentrations of particulate matter PM10 and PM2.5 are again reaching enormous levels in Serbian cities, up to seven times higher than the allowed 50 micrograms per cubic meter (µg/m3). With that in mind, findings of the latest WHO study on premature deaths caused by air pollution in Serbia don’t come as a surprise. The question, however, is whether citizens or authorities will do something after yet another wake-up call or they will all wait air pollution simply to pass.

This year the situation regarding air pollution in Serbia has started heating up very early. At the end of October, the PM10 levels were up to 10 times higher than allowed. Back then it was clear that we cannot expect anything good with the start of the heating season and the activation of heating plants that use fossil fuels. The problem was postponed by strong winds which blew away the pollution, but not for long.

In the last ten days, the PM10 and PM2.5 levels in Serbian cities have ranged from 50 to almost 350 micrograms per cubic meter. Of course, individual and district heating, as well as fossil fuel-based power generation can be blamed for this situation, together with industrial facilities.

There are hardly any metering points controlled by the Serbian Environmental Protection Agency with data in the green. The air is polluted in larger cities, like Belgrade, Novi Sad, Niš, and Subotica, but also in smaller ones, such as Valjevo, Kosjerić, Šabac, Obrenovac, Smederevo, Pančevo, and Bor. The main pollutant is PM10, as well as PM2.5, while the levels of sulfur oxide and nitrogen oxide are in most cases within the allowed limits.

It is not surprising, then, that on December 18 AirVisual, a website and app monitoring air quality worldwide, declared Belgrade the 6th most polluted city in the world. 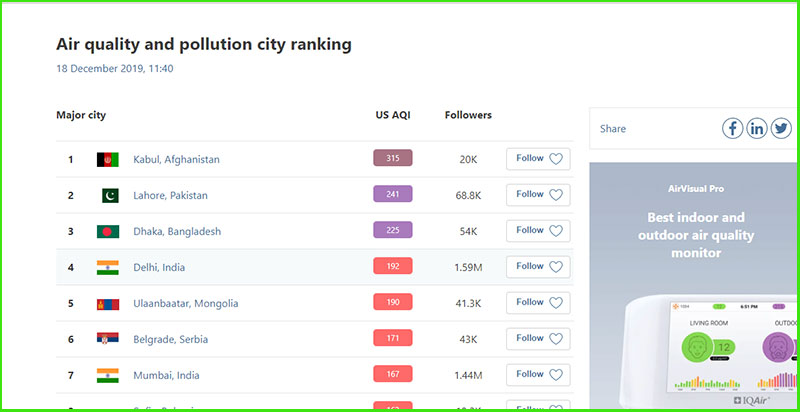 “PM is capable of penetrating deep into lungs, entering the bloodstream”

One of the authors of the WHO’s Health impact of ambient air pollution in Serbia – A call to action study, Uroš Rakić of the Institute of Public Health of Serbia Dr Milan Jovanović Batut, tells Balkan Green Energy News that air pollution is a major cause of premature death and disease, and is the single largest environmental health risk in Europe (WHO). Heart disease and stroke are the most common reasons for premature death attributable to air pollution, followed by lung diseases and lung cancer.

The health effects of air pollution are well documented in global toxicological, clinical and epidemiological research studies. Health studies have shown a significant association between exposure to particle pollution and health risks, including premature death.

In children and adults, both short- and long-term exposure to ambient air pollution can lead to reduced lung function, respiratory infections, and aggravated asthma. Some deaths may be attributed to more than one risk factor at the same time. For example, both smoking and ambient air pollution affect lung cancer. Some lung cancer deaths could have been averted by improving ambient air quality, or by reducing tobacco smoking.

Rakić said that in 2012, International Agency for Research on Cancer (IARC), which is part of the WHO, classified diesel engine exhaust as carcinogenic to humans, based on sufficient evidence that exposure is associated with an increased risk for lung cancer.

Between 2010 and 2015 exposure to PM2.5 accounted for 3,585 premature deaths per year (21,510 in total) in 11 Serbian cities – Belgrade, Obrenovac, Lazarevac, Novi Sad, Beočin, Smederevo, Užice, Kosjerić, Niš, Valjevo and Kragujevac, the WHO study finds. The overall health impact of air pollution for the whole of urban areas in Serbia was estimated at 6,394 attributable deaths per year (38,364 in total). Over the next 10 years, 150,865 years of life are expected to be lost due to air pollution if current pollution levels persist, 75,261 of which in Belgrade alone.

The analysis, based on national data and made using the WHO’s AirQ+ software, was conducted by Pierpaolo Mudu (WHO European Centre for Environment and Health, WHO Regional Office for Europe) and Uroš Rakić. The final version of the report was developed in coordination with the ministries of health and environmental protection as well as the Institute of Public Health Dr Milan Jovanović Batut.

In Serbia, the state-managed system for monitoring air quality showed that the concentrations of air pollutants, particularly PM, in cities regularly exceed the levels recommended in the WHO air quality guidelines.

The main findings of the analysis for 11 Serbian cities are as follows:

The overall health impact of air pollution for the whole of the urban areas in Serbia (not just the 11 cities studied in detail) was estimated at 6,394 attributable deaths.

Who is to blame

The specific documented sources of air pollution include:

This is what we have to do

One group of possible interventions would directly reduce air pollution and exposure:
1. decreasing the use of solid fuels for household heating and cooking;
2. reducing emissions from industrial sites;
3. changing to more sustainable mobility;
4. improving planning to increase the energy efficiency of buildings and make cities greener and more compact;
5. increasing the use of low-emission fuels and renewable combustion-free power sources;
6. implementing strategies for waste reduction, separation, recycling, and reuse;
7. improving communication and awareness of risks.

Having recently spent a week in lovely Belgrade this is terrible. Unfortunately, you can really feel it there. However, I dread to think what the air quality is in cafes, bars and restaurants. The amount of smoking is too much and there is literally nowhere to breath fresh air except for forest areas. Implementing the smoking ban would at least make some improvement.

Government with president and prime minister are not capable to make a decision for the healthy environment. Everything is manageable if you put your work into it.

+ 9
- 0
Thank you, your vote has been noted. You already voted for this comment.