Much has been said about the effects – both good and bad – that smart devices have on the quality of life, but one app is certainly helping raise awareness about the quality of air people breathe, and increasingly so in the region. In turn, awareness of the issue is starting to impact the public opinion.

If you live in Serbia, the mist this morning may have prompted you to immediately grab your phone and launch the app featuring an air pollution mask. If so, you are one of the users of AirVisual, an app downloaded more than 1 million times on Play Store, also available for iOS devices.

The news wasn’t good this morning. Smederevo had a level of particulate matter PM10 of over 823 micrograms per m3 and an Air Quality Index (AQI) of 720, putting the air quality in this Serbian town in the “hazardous” category.

The situation was alarming in the south Serbian city of Niš as well – the AQI stood at 427, which is also in the “hazardous” category, with PM2.5, even smaller particles than PM10 and easier to breathe in, registering at 389.4 micrograms per m3.

The “hazardous” level is visually dramatic on the app, featuring a gas mask (unlike the lower pollution levels illustrated by less frightening air pollution masks).

For the “hazardous” level, the app advises closing windows to keep out dirty air, wearing a mask outside, avoiding outdoor exercise, and using air purifiers indoors.

That the situation is not great in Serbia is also evidenced by Belgrade, where one may not have to wear a gas mask, but does get to experience PM pollution levels often above those seen in Beijing, which is known as one of the most polluted cities in the world. 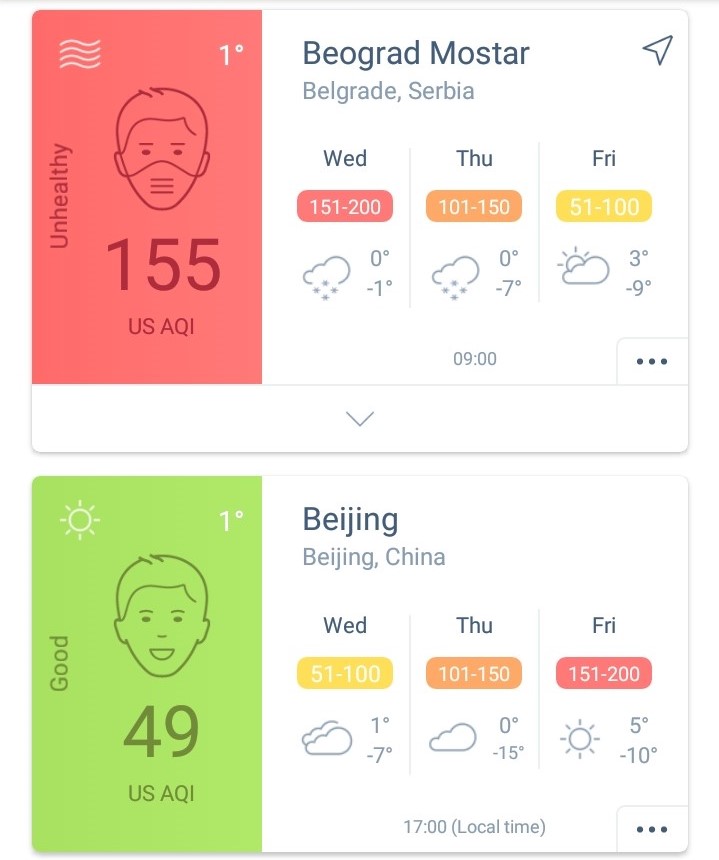 Those using the app regularly and monitoring the situation across the region know that the situation is often similar, if not worse, in Skopje, Europe’s most polluted capital city, according to the World Health Organization’s (WHO) data concerning mean concentrations of PM10 and PM2.5 for 2018, as well as in Sarajevo, which, according to the air quality measurements by the US Embassy, was the world’s most polluted city for several days in late 2018.

And while traffic, alongside industrial producers, is certainly one of the sources of pollution, it is households burning not only firewood and coal, but also plastic and waste tire and oils, that are seen as the biggest problem in winter months.

In a recent interview for Nova Makedonija, Risto Filkoski, a professor at the Faculty of Mechanical Engineering, the Ss. Cyril and Methodius University of Skopje, said that the problem of air pollution in cities such as Skopje, Tetovo, and Bitola was not created overnight, but over decades, and so cannot be resolved by waving a magic wand, but can merely be alleviated in the short run.

According to him, the solution should include the development of the transport infrastructure, especially in the public transit sector, halting chaotic urban sprawl, the development and expansion of the central heating system, penalizing polluters, and motivating people to stay in smaller places rather than migrate to larger cities.

Solutions advised also include replacing old and energy inefficient furnaces and stoves with those meeting eco-standards.

What citizens certainly don’t see as a solution, at least judging from reactions on social media, are statements minimizing the problem of air pollution and virtually criticizing citizens over having “chosen to live in Niš, they don’t live on Mt. Zlatibor.”