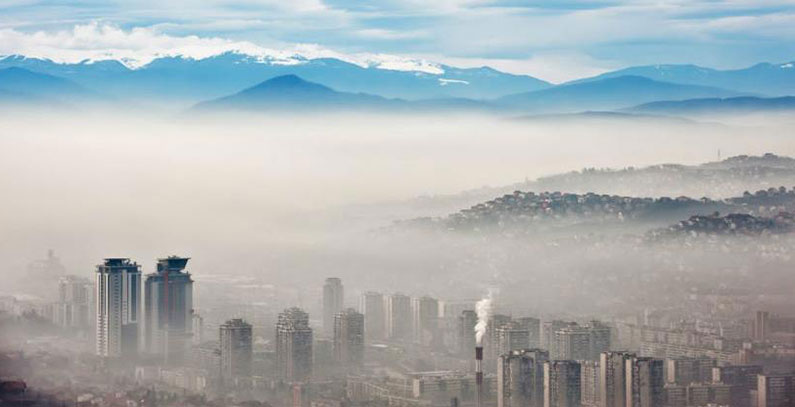 Thanks to a change in the weather, the citizens of Sarajevo have finally started to breathe air with the concentration of pollutants within the permitted limits. The capital of Bosnia and Herzegovina (BiH) has been at the top of AirVisual’s list of the most polluted cities in the world, meaning the air was unhealthy for sensitive groups or for all citizens.

Although the whole region benefited in last two days from weather conditions, Belgrade, Priština, Sarajevo, Skopje, Sofia and Zagreb are still among the 50 most polluted cities in the world.

Serbia’s ombudsman has initiated the process of controlling the work of the Ministry of Environmental Protection while the government held an emergency meeting after persistent pollution in Belgrade. Sarajevo was also among places in the region with major problems.

On January 11, the Government of Sarajevo Canton declared an alert, a grade when pollutant concentrations are dangerous to human health.

According to official data, the concentration of PM10 particles has exceeded the threshold of 300 micrograms per cubic meter (µg/m3), above which there is a risk to human health during short-term exposure. In the following days, the range was 320 to over 500.

The official data is provided by the cantonal Ministry of Physical Planning, Construction and Environmental Protection and the Public Health Institute of Sarajevo Canton.

The alert was canceled on Monday due to a decrease in the concentration of pollutants, but the warning (lower stage than alert) remained in effect until Tuesday. Average concentrations of PM10 on Monday and Tuesday were about 50 µg/m3. Experts, however, expect new problems in the coming days amid changes in weather conditions.

The measures taken under the alert include a traffic ban for cars with the Euro 3 or lower standard and trucks that are Euro 2 or below.

Emergency measures include ban for cars with the Euro 3 or lower standard and trucks that are Euro 2 or belo, as well as for the use of solid fuels and heavy oils in business sector

The response can affect the organization of school activities with the aim of avoiding traffic jams. If necessary, classes are suspended. The use of solid fuels and heavy oils in technological processes for all legal entities and individuals can also be forbidden.

This is just a continuation of the problems that the people of Sarajevo have experienced. Over the years, several studies have concluded that Sarajevo is one of the most polluted cities in the world.

According to a report produced by the United Nations Environment Programme (UN Environment), Sarajevo is one of the 19 Western Balkan cities in which air pollution is directly responsible for up to one in five premature deaths.

The researchers have found the daily PM10 limit of 40μg/m3 set out under national legislation was exceeded between 120 and 180 days in a year – especially during the winter. In comparison, in European Union member states an emergency is triggered when it tops 35 days.

The main sources of dust emissions are coal-fired power plants and household heating.

Air pollution prompted BiH in April 2019 to ban imports of used cars fitted with a Euro 4 engine or lower grade and new cars with technology up to Euro 5.

Due to air pollution, a protest called Collective Poisoning was organized on Tuesday in front of the Sarajevo Canton Government building by an informal group of citizens. Also, a meeting of international officials and ambassadors in BiH with Sarajevo Canton Prime Minister Edin Forto was held.

A protest called Collective Poisoning was organized in front of the Sarajevo Canton Government building, by an informal group of citizens

Activist Sanjin Gijo said the aim of the protest was to raise public awareness in order to raise the pressure on officials to implement activities to end air pollution, Klix.ba reported. “It is important for our children, but also for all citizens,” he stated.

According to local media, the protest gathered from 50 to one hundred citizens.

After the meeting with the ambassadors, Forto said funding was arranged for air purifiers for all Djeca Sarajeva public kindergartens, and also for masks for public servants who work outside.

Financing for air purifiers for all public kindergartens was secured

The project will be implemented with the assistance of the United Nations Development Program (UNDP).