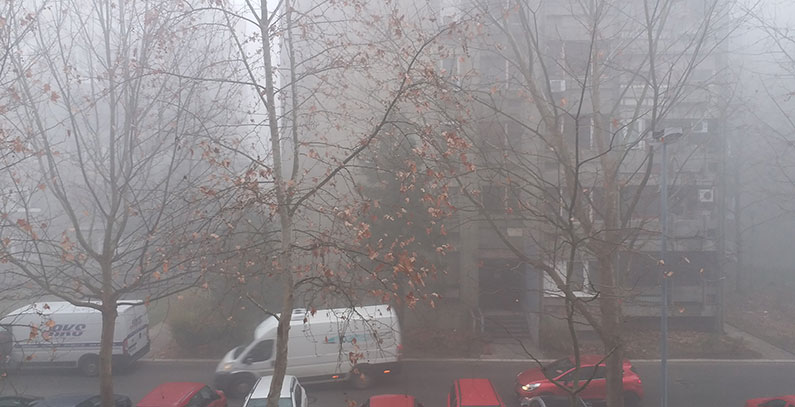 Serbian ombudsman Zoran Pašalić has initiated the process of controlling the work of the Ministry of Environmental Protection and six municipal authorities: the cities of Belgrade, Pančevo, Niš, Kragujevac and Užice, and the Municipality of Kosjerić, due to air pollution.

He has asked the ministry and local municipalities to provide information within 15 days on actions implemented to reduce pollution, on the main causes of pollution, and on informing citizens in a timely manner about the air pollution and potential consequences.

The day after the ombudsman’s decision, the Institute of Public Health of Serbia “Dr Milan Jovanović Batut” recommended to sensitive persons to restrict their stay outside in the morning and evening.

Those who are healthy should not exercise in the open air

Under the sensitive persons, the Institute implies persons with chronic respiratory and cardiovascular illnesses, young children and the elderly. When it comes to the healthy population, the Institute said no physical activity is performed outdoors on days with increased levels of air pollution.

According to the data from the Serbian Environmental Protection Agency, SEPA, in recent weeks the air in Beočin, Belgrade, Bor, Kosjerić, Novi Sad, Niš, Pančevo, Smederevo, Užice, and Valjevo has been ranked as “polluted” or “heavily polluted”.

Pašalić said excessive air pollution in Belgrade and other cities in the country justifiably disturbed the public and citizens and that they unequivocally pointed to the necessity of urgent measures. He noted high concentration of suspended particles PM10 and PM2.5 have been registered in several places in the past moths.

Having in mind that excessive air pollution has been affecting a large number of cities and municipalities for long, the fact that the ministry and other relevant institutions haven’t implemented any particular measure, but also the need to start solving the issue more actively, the ombudsman said, the control protocol has been triggered for the ministry and six local authorities.

The protector of citizens underscored air has been graded excessively polluted, in the third category, already in 2018 in Belgrade, Kraljevo, Valjevo, Kragujevac, Subotica, Sremska Mitrovica, Pančevo, Užice, Smederevo and Kosjerić.

“In all these places, the cause of excessive pollution were suspended particles PM10 and/or PM2.5. According to available data, the contribution of road transport was 6% for each of the polluting matter class while most of the emissions originated from district heating plants with the capacity under 50 MW and individual furnaces,” Pašalić asserted.

In other news, according to Institute of Public Health of Serbia “Dr Milan Jovanović Batut,” air pollution in urban areas is mostly from PM10.

It is boosted by low air temperature, high air pressure and temperature inversion in the winter period, the statement adds.

The institution claimed it has been confirmed by healthcare centers that the number of admitted children hasn’t grown but that it is at a level like in the same periods of previous years.

Air pollution is caused by house furnaces, use of fossil fuels for heating, the large number of motor vehicles, burning low-quality lignite…

The Ministry of Health and the Batut institute stressed there is no need to panic.