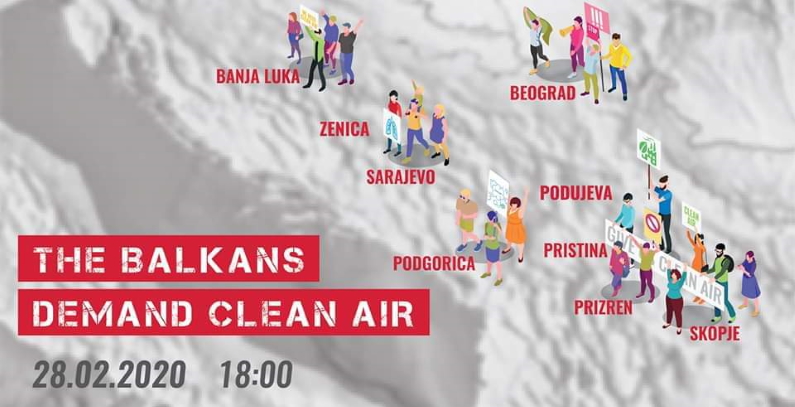 Activists from several countries in former Yugoslavia said demonstrations and other public actions are planned to demand measures for clean air. The gatherings are set for 18:00 on Friday, February 28. The campaign’s tags on social networks are: #BalkansDemandCleanAir, #BalkanZahtijevaČistVazduh, #BallkaniKërkonAjërTëPastër, #BalkanZahtevaČistVazduh and #БалканотБараЧистВоздух.

Eko forum Zenica is organizing a march in the town in the central part of Bosnia and Herzegovina. It starts at the Kameni spavač memorial and the route is through the pedestrian zone to the city authority, cantonal prosecutor office and the building of the Zenica-Doboj Canton.

The Center for Environment from Banja Luka, the capital of the Republic of Srpska entity, said it would first hold a ceremony at noon in Petar Kočić park to award the person responsible for solving the air pollution issue in the city. After that, at the same time as in the other places, a bicycle ride is up in cooperation with Banja Luka Critical Mass, the announcement adds. The starting point is in front of the Museum of Contemporary Art.

The Skanderbeg Square will be the site of the rally in Prishtina, truAktiv said. The event in Prizren starts already at 11 in the morning at the Šadrvan – Shatërvan square, said EC Ma Ndryshe. Oaktiv announced it would file a petition with the Municipality of Podujeva (Podujevo) for clean air and the improvement in living conditions.

Initiative Don’t Let Belgrade Drown called on protesters to come in front of the Assembly of the City of Belgrade. Earlier, the Citizens Front, which includes Don’t Let Belgrade Drown, filed criminal charges on two accounts against the minister of environmental protection of Serbia. It alleges Goran Trivan has failed to initiate protection measures and breached the people’s right to be informed about the state of the environment.

The gathering in Skopje is also scheduled for 18:00, in front of the Ministry of Environment and Physical Planning. Authors of air pollution reading application AirCare organized it together with Fridays for Future Skopje.

The participants in Podgorica are coming to the monument of king Nicholas, across the street from the Parliament of Montenegro. The protest and performances should last one hour, environmental group Ozon said.

In a separate statement, the Delegation of the European Union to Serbia called on those interested to attend a two-hour discussion tomorrow, February 27, at 12:30 in EU Info Centre, 7 Kralja Milana street in Belgrade. The topics for the panel will be the funding for environmental protection measures with regard to increasing air quality, Serbia’s rights and obligations as a member of the Energy Community and the expectations from the start of chapter 27 of the negotiations to join the bloc.

— Update: Organizers have canceled the rallies in Skopje and Sarajevo.