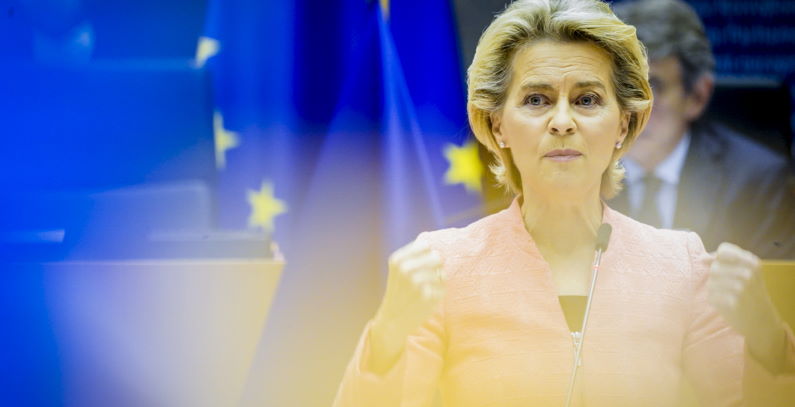 Europe will become a climate-neutral continent by 2050, European Commission President Ursula von der Leyen said today in her first State of the European Union address in the European Parliament and revealed an ambitious agenda for climate action, lowering emissions and recover and reboot the economy with green investments.

“There is no more urgent need for acceleration than when it comes to the future of our fragile planet. While much of the world’s activity froze during lockdowns and shutdowns, the planet continued to get dangerously hotter. And we see it all around us: from houses evacuated due to the glacier collapse on the Mont Blanc to fires burning through Oregon to crops destroyed in Romania by the most severe drought in decades. We will not get there with a status quo. We need to go faster and we need to do things better,” she asserted.

The EU will act in a responsible and evidence-based way and in that regard, its executive body is proposing to boost the target for greenhouse gas emissions cuts by 2030 to at least 55% from 1990 levels, Von der Leyen said. It compares to the existing 40% goal.

She acknowledged the new aim would be “too much for some and not enough for others,” in the light of the recent decision by the European Parliament’s Committee on Environment, Public Health and Food Safety to push for a 60% target. On the other hand, there are member states that oppose a stronger commitment or demand more funds from Brussels.

The European commissioners actually increased the goal as earlier this year they hinted the 2030 level would be defined as between 50% and 55%.

Slashing emissions is good for business

Von der Leyen noted 170 business leaders and investors from small and medium-sized enterprises to the world’s biggest companies asked her in a joint letter yesterday to set the target at 55% at least. Signatories include Microsoft, IKEA, Deutsche Bank, Unilever, H&M, Google and EDF.

The level will put the European Union firmly on track to climate neutrality by 2050 and to meeting the Paris Agreement obligations, the commission president stressed and added the world would be able to keep warming below 1.5 degrees Celsius if others follow the lead. Emissions declined by 25% since 1990 while the EU economy expanded by more than 60%, she said.

“We have more young people pushing for change. We have more proof that what is good for the climate is good for business and is good for us all,” in her words. Von der Leyen promised to enhance emissions trading and said the green overhaul would lower import dependency, create millions of jobs and “more than halve air pollution.”

The current levels of consumption of raw materials, energy, water, food and land use in the EU are not sustainable, she underscored and urged for a change in the way how nature is treated and how people produce and consume, live and work, eat and heat, as well as in travel and transportation.

The administration in Brussels will “tackle everything from hazardous chemicals to deforestation to pollution,” according to the head of the executive body. The EU is developing a green bond standard, she said and announced that 30% of funds for the EUR 750 billion coronavirus recovery package, called the Next Generation EU, would be raised through green bonds.

The construction sector can be turned from a carbon source into a carbon sink, Von der Leyen claims

Von der Leyen vowed to support hydrogen technology and work on the goal to install one million charging points for electric vehicles. Buildings must become “less wasteful, less expensive and more sustainable,” she said, adding “the construction sector can even be turned from a carbon source into a carbon sink, if organic building materials like wood and smart technologies” such as artificial intelligence are applied.

Recovery package for Western Balkans is underway alongside CO2 tax

Finally, the European Commission’s chief revealed it would soon present an economic recovery package for the Western Balkans focusing on a number of regional investment initiatives. As for the planned carbon border adjustment mechanism, essentially a CO2 tax, Von der Leyen said it should motivate foreign producers and EU importers to reduce their carbon emissions, while ensuring that the playing field is leveled in a way compatible with the rules of the World Trade Organization.

Earlier, European Commission’s Executive Vice President Valdis Dombrovskis asserted that the free allowances given to polluting industries under the EU’s emission trading system (ETS) should be scrapped and included in the carbon border adjustment mechanism.

In the report on the EU climate law that the said European Parliament committee adopted, the executive branch is also urged to end fossil fuel subsidies from 2025. According to the document, all member countries should also individually become carbon neutral by 2050 and then even turn negative. It means they would take out more harmful gases than they release.

However, the vote was tight, with 40 in favor against 37, and the majority of lawmakers have so far supported the European Green Deal as it is. The plenary session is set to be held next month.