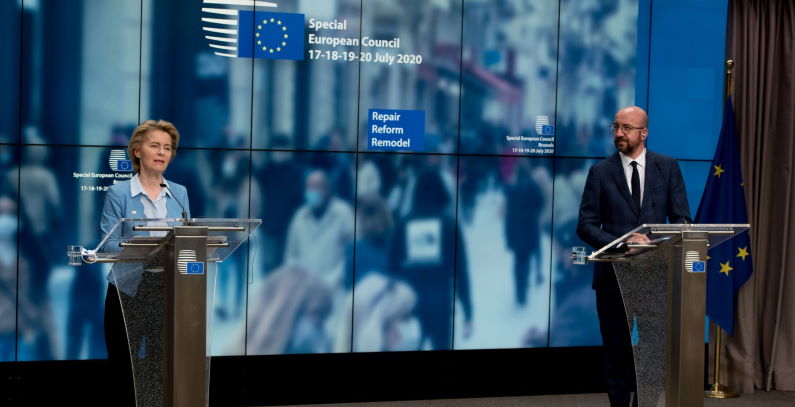 The European Council reached an agreement on the seven-year budget through 2027 including a mechanism for the recovery from the effects of the coronavirus pandemic worth EUR 750 billion. The EU heads of state and government gave the green light for EUR 10 billion for the Just Transition Fund from the COVID-19 war chest, slashing the sum from the proposed EUR 32.5 billion. Other green and innovation initiatives are set to be shrunk from the original plans as well.

A marathon round of negotiations in the European Council resulted in a landmark deal on financing for the European Union for the period from 2021 to 2027, though with compromises at the expense of funds for green energy and climate change mitigation. The EU heads of state and government approved EUR 1.82 trillion, of which they earmarked EUR 17.5 billion for the Just Transition Fund. It is mostly envisaged for phasing out coal.

The European Council greenlighted a EUR 1.07 trillion budget or multiannual financial framework (MFF) and the Next Generation EU (NGEU) COVID-19 recovery package of EUR 750 billion. The latter consists of EUR 390 billion in grants and EUR 360 billion in loans. The entire spending plan must be approved by the European Parliament.

EU leaders changed the initial proposition by the European Commission, which was EUR 500 billion in grants and EUR 250 billion in loans. It means some of the essential programs included in the European Green Deal framework would be implemented with less favorable conditions.

At the same time, other items are about to get less funding from the budget. One of them is Horizon Europe, which supports innovations. The recovery mechanism should be funded by borrowing until the end of 2026 and the debt must be returned through 2058.

The emissions trading system may include the maritime sector and aviation

Both NGEU and MFF will help transform the EU through its major policies, particularly the European Green Deal, the digital revolution and resilience, the European Council announced.

As for the repayment for the borrowing spree, it suggested national taxes on nonrecycled plastics and a levy from 2023 on goods imported from countries with emissions that are higher than an EU benchmark. In the conclusions, the 27-member bloc said the European Commission has until the end of June next year to propose the “carbon border adjustment mechanism” together with a digital tax.

The remaining options for covering the loans is a tax on financial transactions and the extension of the emissions trading system (EU ETS) to the maritime sector and aviation. One of the conditions for member states to become eligible for funding is to accept the EU goal to reach climate neutrality by 2050.

CAN Europe commended the deal, but also warned it still enables subsidies for fossil fuels.

Update: The article was changed to include EUR 7.5 billion in basic budget appropriations for the Just Transition Fund.