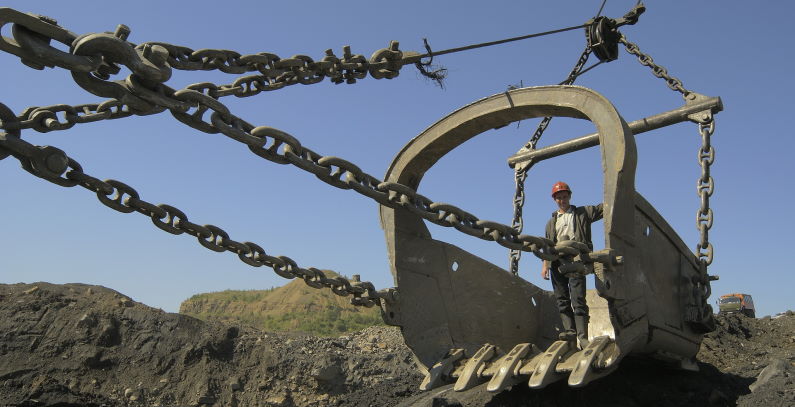 The state-owned company PPC managing lignite open pits and thermal power plants in Greece launched the first round of the voluntary layoffs for employees in the fossil fuel business. Workers aged 55 and higher who apply are entitled to compensation of EUR 35,000 each. Minister Kostis Hatzidakis says PPC may let go up to 5,500 people from the coal sector.

Greece is eligible for more than EUR 1.7 billion from the European Union’s Just Transition Fund, aimed at cushioning the blow for employees and firms amid decarbonization efforts, the official allocation has shown. The country has decided to shut down its lignite mines by end-2023. State-owned Public Power Co. or PPC, in charge of the assets, started the endeavor by announcing severance pay for 890 coal workers in the north who volunteer to leave.

The scheme with a one-off compensation of EUR 35,000 is for those who will be aged 55 or more at the end of the year, and savings are projected at EUR 56 million per annum. The units in the Western Macedonia province employ almost 3,000 people.

Hatzidakis: The number of employees will be reduced to 12,000

PPC’s management said it would come up with a plan for further layoffs of coal workers within a few months. Minister of Environment and Energy Kostis Hatzidakis estimated as many as 5,500 people would leave the company. He said hiring is also planned, but without any financial burden, and added the total number of employees would be cut to 12,000 from 16,000.

The utility stressed it would prioritize investments in renewable energy and digital transformation. The preferred bidder for the construction of the 30 MW solar power plant is expected to be announced this month, as are bids for the installation of a 200 MW photovoltaic facility in open-pit coal mining areas, both in Ptolemaida, it said in its quarterly results.

PPC reported a net loss of EUR 11.1 million compared to a EUR 218.2 million gap from the first three months of last year. Adjusted earnings before interest, taxes, depreciation and amortization (EBITDA) came in at EUR 182 million against a loss of EUR 66.3 million in the comparable period of 2019.

Lignite output landed 31% lower than in the first quarter of last year, easing the costs for carbon certificates and resulting in operating profit

Revenue jumped 7.1% to EUR 1.22 billion and net debt was slashed 1.4% to EUR 3.63 billion. PPC revealed it opted for the securitization of unpaid receivables.

The results reflect the reduction in lignite production by more than 31%, which lowered the costs of carbon allowances. The share of online payments almost doubled to 30% during the lockdown measures amid the response to the COVID-19 pandemic.

The local media learned the company is about to start the development of an electric vehicle charging network, unveiled in December. The strategy includes a range of services in the sector. PPC intends to begin with 1,000 units throughout the country within three years.

Anonymous sources said there is a possibility of joint ventures with domestic partners including for the manufacturing of electric car parts in Western Macedonia and in Megalopolis, where PPC has another coal mine. It has the ambition to use the areas for solar power plants of 3 GW in total.

PPC, also known as DEI, said the European Bank for Reconstruction and Development approved a EUR 160 million credit line to back essential infrastructure projects, with the accent on reducing carbon dependence. The package was intended for working capital to ensure vital payment capacity and liquidity with regard to the impact of the spread of the coronavirus.

The credit line has been activated in late April, but since the catastrophic scenario has been avoided, the funds can be used for infrastructure in the context of decarbonization, the company stressed. The EBRD’s documentation underscores PPC took on the obligation to prepare an action plan for climate-related financial disclosure and that the financing excludes coal and mining.

Greece has prepared a bill for tax breaks and other incentives for investments in electrification and mobility, particularly for the lignite regions.