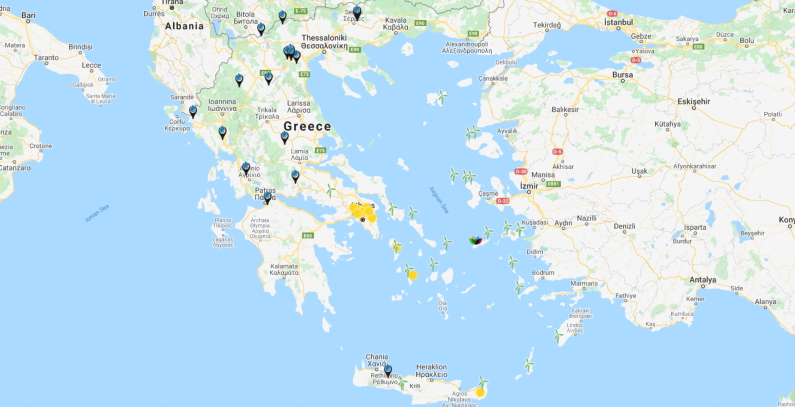 Greece’s national electricity producer PPC is leaning on its green energy firm for the transition away from conventional and dirty technology. PPC Renewables is developing geothermal, wind and solar projects and establishing ventures, where domestic companies Motor Oil Hellas and Helector emerged as next likely partners.

Government-controlled Public Power Corp. SA or PPC is discussing with Motor Oil (Hellas) Corinth Refineries SA about a 100 MW wind farm venture in an unspecified Greek island, the local media earned. At the same time, the electricity producer is reportedly considering the possibility to rekindle a tendering procedure frozen two years ago and form a strategic partnership with Helector SA in geothermal energy. Both projects are said to be formally pursued via the PPC Renewables SA subsidiary.

Insiders revealed the island wind farm deal would include an interconnection with the national grid and that the sustainability of the potential business is still being examined. Of note, PPC and Motor Oil Hellas have jointly expressed a non-binding interest in buying 65% of DEPA Commercial SA from the state. The target entity is mostly active in the gas sector in Greece.

Helector was the best bidder in 2018 for the financing, construction and management of four planned geothermal power plants, followed by Terna. The fields are located in Lesbos, Milos-Kimolos-Polyaigos, Nisyros and Methana and PPC has the lease contract. Helector is controlled by Ellactor SA, which is also active in construction, real estate and waste management.

The strategic partner in the development of four geothermal power plants will get a majority share in the special purpose company, but PPC Renewables is keeping the exploitation rights

PPC Renewables already set up a special purpose firm and the strategic partner should get the majority. But it will keep the exploitation rights and conduct drilling independently.

The first exploratory operation is purportedly targeted for next month in Milos, where a 5 MW facility is planned. The Lesbos geothermal well has the potential of 8 MW and the remaining two are for 5 MW power plants.

PPC Renewables has been pursuing partnerships with domestic and overseas companies, especially in the transformation of open-pit coal mines into photovoltaic plants of 2 GW in total. A series of memorandums have been signed including with Masdar Taaleri, EDP Renewables and Germany’s RWE.

The Ministry of the Environment and Energy recently approved the so-called environmental terms for PPC Renewables’ three wind farms in the Rhodopes, in the northeast. They are planned for 87.5 MW in capacity and 35 turbines.

The Greek green energy company has 18 small hydropower plants in its portfolio with 78 MW in total, of which five or 21 MW, respectively, are run with partners. PPC Renewables is developing another eight projects in the sector, with an overall 25 MW.

Of note, Ellactor had 401 MW in installed capacity of renewable sources at the end of last year or 35% more than in 2018. It started trial operation of another 90 MW in the first quarter.