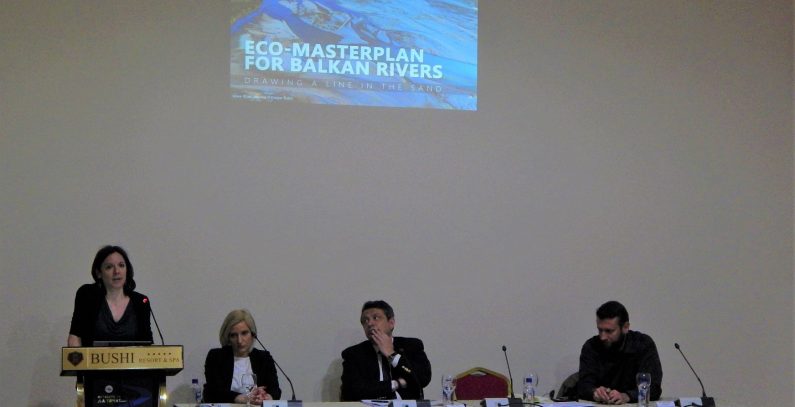 Non-governmental organizations (NGOs), government representatives, experts, hydropower developers, and the local community gathered at an international conference in North Macedonia to discuss challenges and solutions concerning nature protection and hydropower projects in the country, according to a joint press release from NGOs Front 21/42, Riverwatch, and EuroNatur.

At the conference, the first ever national approach for defining no-go zones for hydropower projects was presented, the news release reads, adding that the approach is based on the Eco-Masterplan for Balkan Rivers, published by Riverwatch and EuroNatur.

This spatial plan for the watercourses between Slovenia and Greece envisages no-go zones for new hydropower plants on the basis of the ecological value of the respective rivers. According to the plan, more than 80 % of the assessed river stretches in North Macedonia qualify as no-go zones, covering all protected areas like the Mavrovo National Park.

“We should all join forces, us [the Ministry of Environment], the experts, business representatives, the international community, the civil society organizations, to address and solve these challenges together,” Makraduli said.

Theresa Schiller, project manager at EuroNatur, one of the NGOs coordinating the Save the Blue Heart of Europe campaign, noted that hydropower projects with their devastating effect on nature and biodiversity do not belong in a national park.

For her part, Aleksandra Bujaroska, CEO of Front 21/42, the local campaign partner in North Macedonia, called for urgent designation of no-go zones.

“The new Energy Development Strategy for 2035 must reflect the international biodiversity targets and exclude the identified no-go river stretches from any future hydropower developments,” she said.

The press release adds that the conclusions of the conference will be submitted to the national authorities in charge of preparing and adopting the new Energy Development Strategy.

The Eco-Masterplan for Balkan rivers identifies nearly 3,000 hydropower projects in the region, which the NGOs behind the study warn cannot proceed without causing a severe loss of biodiversity and destruction of nature.

The examples of no-go river stretches identified in the plan include the Vjosa/Aoos river in Albania and Greece, the Neretva river in Bosnia and Herzegovina, the Morača river in Montenegro, and the rivers and streams in the Mt. Stara Planina nature park in Serbia.

Of a total of 2,790 identified hydropower plant (HPP) projects, 2,497, or 89%, are in the proposed no-go zones. At the same time, 91% of all of the identified HPP projects, planned or already under construction, are small hydropower plants (SHPPs) with a capacity of less than 10 MW and 59% are even below 1 MW.

The environmental impacts of small hydropower plants are often overlooked and can cumulatively be even bigger than for large projects, while their contribution to overall energy generation is tiny, rendering them both economically and environmentally nonsensical, according to the Eco-Masterplan’s conclusions.

An energy study commissioned for the purpose of producing the Eco-Masterplan highlights the availability of other renewable energy sources, namely wind, solar PV and biomass, as well as energy efficiency, as possible tools for achieving national renewable energy targets.