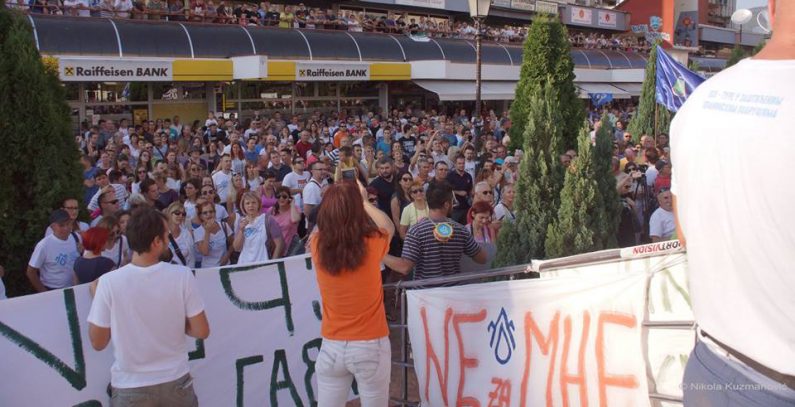 An “ecological autonomy” of Mt. Stara Planina will be declared if the authorities fail to put a moratorium on all small hydropower plants (SHPPs) there in the next few days, according to the organizer of a protest that gathered thousands of people in Pirot on September 2, including environmental activists, mountaineers, associations’ representatives, university professors, and other citizens.

The organizer, a citizen initiative to Defend the Rivers of Mt. Stara Planina, said the demands made at the environmental protest in Pirot include reviewing the cadaster of potential locations for SHPPs in Serbia, with the aim of reducing their number; banning the construction of hydropower plants in protected areas; removing all illegally built SHPPs; and using all available legal means to stop the issuance of new permits for the construction of SHPPs and immediately halting works under way on all SHPPs.

The demands, sent to the Serbian parliament, government, prime minister, and president, also include establishing a license mechanism that would obligate operators to continuously improve and modernize all hydropower plants. According to the organizers, declaring an “ecological autonomy” would involve citizen actions to prevent any construction of SHPPs on Mt. Stara Planina.

Aleksandar Jovanović Ćuta, one of the founders of the initiative to Defend the Rivers of Mt. Stara Planina, told Balkan Green Energy News earlier that the protest was being organized over the authorities’ idea to run small mountain rivers through pipes for the production of a negligible amount of electricity. He said that in light of the EU’s requirement for Serbia to increase the share of renewable energy sources in the energy mix, the state has chosen the cheapest option, which is the construction of run-of-the-river SHPPs.

On August 25, the initiative’s activists and locals from the village of Temska used spades, shovels, and other tools to restore the Rudinjska river’s original course after the investor changed it to build an SHPP. This followed protests over the construction of SHPP Pakleštica on the Visočica river, a project which the Ministry of Environmental Protection originally approved, but then revoked the approval in early 2018. However, a court eventually ruled in favor of the investor.

The construction of SHPPs gathered steam across Serbia after 2009, when the state adopted the decision to subsidize renewable energy sources, with the official register of electricity producers eligible for the feed-in tariff over a 12-year period containing 128 SHPPs.

Protests have also been taking place in countries other than Serbia. They have been organized in Albania, over the construction of an HPP on the Vjosa river, but also in Bosnia and Herzegovina, where women from Kruščica have been blocking the construction of a dam and hydropower plant for more than a year now. Representatives of Save the Blue Heart of Europe campaign have handed a petition backed by 120,000 people from around the world to the European Bank for Reconstruction and Development (EBRD) calling on international development banks to rein in financial support for hydropower projects in the Balkans.

Igor Vejnović, Hydropower Policy Officer at CEE Bankwatch Network, one of the largest networks of environmental civil society organizations in Central and Eastern Europe, told Balkan Green Energy News that the construction of HPPs has an adverse environmental impact, particularly in protected natural areas such as Mt. Stara Planina.

“In my opinion, citizens are defiant because they have lost confidence that the state is ensuring lawfulness of the process. The ministry in charge of environmental protection revoked approval it previously issued for SHPP Pakleštica on Mt. Stara Planina. Officials of the municipality of Knjaževac were appalled at the destruction brought about by the construction of SHPP Mezdreja on the Crnovrška river, even though the investor supposedly secured all the necessary permits. The state should strengthen inspection capacities and planning capacities along a river basin, in line with the EU Water Framework Directive, before a further development of the sector is allowed. Once of the first opportunities to bring some order to the sector presents itself with the formation of a new SHPP cadaster, but the process has been very non-transparent so far, with no participation of the public,” said Vejnović.