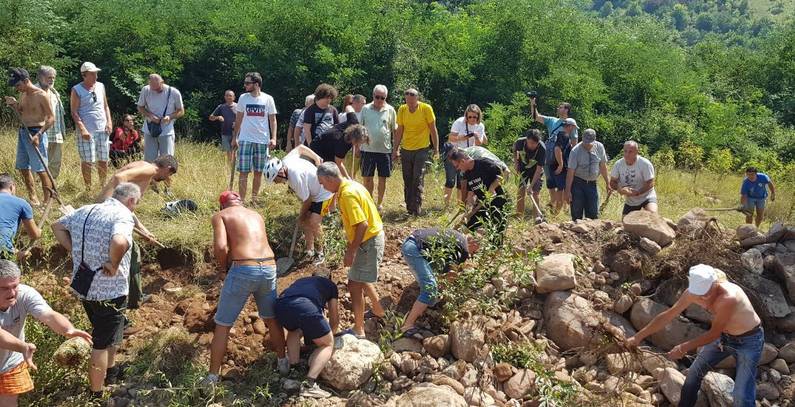 A citizen initiative to Defend the Rivers of Mt. Stara Planina is organizing an environmental protest in Pirot in southeastern Serbia to begin at 5 pm on Sunday, September 2, over its two demands – that 58 small hydropower plants (SHPPs) be struck from the Pirot municipality’s spatial plan and to put a moratorium on the construction of SHPPs in Serbia until a law is passed to ban construction in protected areas.

The construction of SHPPs gathered steam across Serbia after 2009, when the state adopted the decision to subsidize renewable energy sources, with the official register of electricity producers eligible for the feed-in tariff over a 12-year period containing 128 SHPPs. Objections have been raised mostly by locals whose homes are located in the close vicinity of the SHPPs, as well as some experts, but for the most part investors have faced no major problems. And then everything changed on Mt. Stara Planina.

In September 2017, the construction of SHPP Mezdreja was launched in the Stara Planina nature park, on the Crnovrška river, with even the Knjaževac municipality officials raising objections. In early 2018, the Ministry of Environmental Protection revoked approval for the construction of SHPP Pakleštica on the Visočica river, but a court ruled in favor of the investor several months later. The citizens then took to the streets – or in this case, the riverbanks.

“Crime against people and the environment”

Aleksandar Jovanović Ćuta, one of the founders of the initiative to Defend the Rivers of Mt. Stara Planina, tells Balkan Green Energy News that the protest is being organized over the authorities’ idea to run small mountain rivers through pipes for the production of a negligible amount of electricity. He says that in light of the EU’s requirement for Serbia to increase the share of renewable energy sources in the energy mix, the state has chosen the cheapest option, which is the construction of run-of-the-river SHPPs.

“They issue a permit to an investor and the investor runs a river through a pipe and makes millions, and we lose a river. Along the way, all life in the river is killed off – in a nature park such as Stara Planina no less. This is why we have been protesting for two years now,” he says.

According to Jovanović, the Pirot municipality’s spatial plan envisages the construction of 58 small SHPPs out of an overall 800 planned in Serbia. Construction works have been launched on several of these SHPPs, with about 20 permits issued so far.

“But they ran into us, a group of ordinary people gathered in the initiative to Defend the Rivers of Mt. Stara Planina. Under the law, construction is banned in nature parks, and the state should implement that, and if it won’t, we will. No one other than the people who live on the river banks will decide on the rivers’ survival,” says Jovanović.

On August 25, the initiative’s activists and locals from the village of Temska used spades, shovels, and other tools to bring the Rudinjska river back to its bed after the investor changed its course to build an SHPP.

Jovanović says that the investor has a permit to build an SHPP on the river, which often dries out during summer.

“We removed a dam the investor built and rerouted the river back to its bed. This is the message to all: if anyone, anywhere shows up on our rivers, they won’t be allowed to build! Wherever a bulldozer should appear, we will dismantle it. This is a crime against people and the environment,” he says.

Protests are also taking place in countries other than Serbia. They have been organized in Albania, over the construction of an HPP on the Vjosa river, but also in Bosnia and Herzegovina, where women from Kruščica have been blocking the construction of a dam and hydropower plant for more than a year now. Representatives of the Save the Blue Heart of Europe campaign have handed a petition backed by 120,000 people from around the world to the European Bank for Reconstruction and Development (EBRD) calling on international development banks to rein in financial support for hydropower projects in the Balkans.

“All river life disappears, including insects, crabs, and even plants”

Dule Mihajlović from Mt. Stara Planina was among those who helped “free” the Rudinjska river.

“No one consulted the local population when they designated locations for the construction of SHPPs under the Pirot municipality spatial plan. In the early 1990s, a German company wanted to build a quarry here, close to a beautiful waterfall. At the time, we gathered spontaneously, when there were no social networks, got on our tractors, went up there and pushed off their machinery… And we saved the waterfall and the environment,” Mihajlović tells Balkan Green Energy News.

Environmental biologist Ljubomir Pejčić, executive director of the United Anglers of Serbia, took part in rerouting the Rudinjska river back to its original course. He says the SHPPs’ impact on life in rivers is devastating.

“They completely change the structure of the fauna and lead to the disappearance of a majority of species that used to live there. This refers not only to fish, but all life, including insects, crabs, and even plants – all life in the closest vicinity of such rivers disappears,” he told Balkan Green Energy News.

Asked whether well-designed SHPPs can minimize this negative impact, Pejčić says that he has seen no such example in Serbia and the wider Balkan region, insisting that all SHPPs he has encountered have caused more or less of a damage.

He says that the latest research shows that large HPPs with major reservoirs emit more greenhouse gases than they eliminate, but that it is better to build two such large HPPs than several hundred small ones that will destroy several hundred mountain rivers.

“There have been better solutions than SHPPs”

Electronics engineer Goran Tokić tells Balkan Green Energy News that it can be easily calculated what SHPPs bring and what they take away. The average SHPP is a run-of-the-river mini hydropower plant with a capacity of 0.2 MW and if 100 such plants were to be built, which would mean the destruction of around 200 kilometers of mountain rivers, an overall capacity of about 20 MW would be obtained.

“Serbia requires electricity generation capacities of around 5,000 MW, which means that the 100 SHPPs would contribute 1/250 of the capacity needed. And if all the planned SHPPs were to be built, we would obtain 100 MW, which would cover about 2% of Serbia’s needs,” Tokić says.

For example, if state power utility Elektroprivreda Srbije (EPS) cut transmission and distribution losses from about 17% to 15% (the European average is below 10%), not a single SHPP would be needed, he says.

“There is also wind energy, solar energy… which is not utilized much in Serbia, then there is the thermal insulation of buildings and improving energy efficiency. All in all, Serbia can easily produce electricity in other ways and save it. But it won’t! All of the other options are a little more expensive than the simple, foul, barbaric running of rivers through pipes. That’s where the biggest profits are for the investors,” says Tokić.

Aleksandar Jovanović Ćuta says that 58 locations for SHPPs were entered into the Pirot municipality’s spatial plan in 2011 in violation of the nature protection law. The municipality cited the Spatial Plan of the Republic of Serbia, which is based on the 1987 SHPP cadaster, he says.

“No public debate was organized at the time”

Pirot Mayor Vladan Vasić said earlier that construction permits for SHPPs are not in the local government’s purview, as well as that the Spatial Plan of the Republic of Serbia envisages the construction of SHPPs on Mt. Stara Planina.

In mid-July, the Green Party, which advocates a blanket ban on the construction of SHPPs in protected areas and national parks, proposed a draft of a new environmental impact assessment law to require impact assessment for SHPPs.

Igor Vejnović, Hydropower Policy Officer at CEE Bankwatch Network, one of the largest networks of environmental civil society organizations in Central and Eastern Europe, tells Balkan Green Energy News that the construction of HPPs has an adverse environmental impact, particularly in protected natural areas such as Mt. Stara Planina.

“In my opinion, citizens are defiant because they have lost confidence that the state is ensuring lawfulness of the process. The ministry in charge of environmental protection revoked approval it previously issued for SHPP Pakleštica on Mt. Stara Planina. Officials of the municipality of Knjaževac were appalled at the destruction brought about by the construction of SHPP Mezdreja on the Crnovrška river, even though the investor supposedly secured all the necessary permits. The state should strengthen inspection capacities and planning capacities along a river basin, in line with the EU Water Framework Directive, before a further development of the sector is allowed. Once of the first opportunities to bring some order to the sector presents itself with the formation of a new SHPP cadaster, but the process has been very non-transparent so far, with no participation of the public,” says Vejnović.

The ball seems to be in the state’s court, as it has been for a while. It remains to be seen whether the state’s response is contained in last week’s invitation published by state water management company Srbijavode to lease land for the construction of 18 SHPPs.