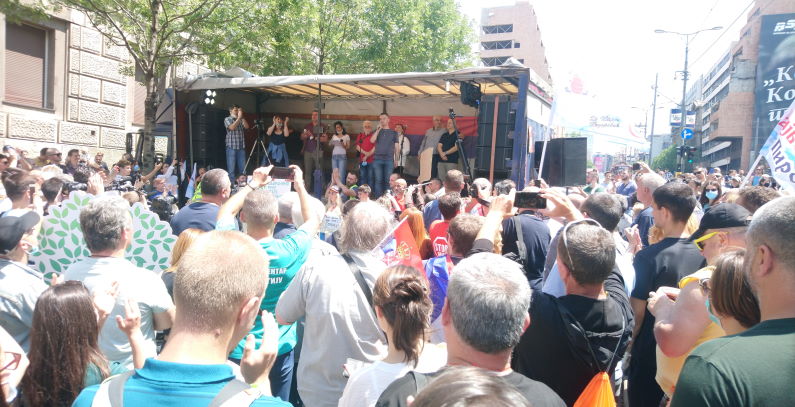 More than forty environmentalist organizations participated at the demonstration in front of the building of the Government of Serbia in Belgrade against the construction of thermal power plants on coal and demanding a ban on the run-of-river or derivative-type hydropower plants.

The movement that has been urging authorities in Serbia to abolish the construction of small hydroelectric units received support from the Serbian Academy of Sciences and Arts (SANU), which organized two conferences, as well as from scientific institutes and universities, Dean of the Faculty of Forestry Ratko Ristić said. Environmentalist activists have been trying to spread the word for several years about how disastrous the concept is, he underscored at a protest against the run-of-river hydropower plants, air pollution and for the protection of forests.

The event gathered over 40 groups under the slogan ‘Our rivers, our forests, our air, our land’. It was led by the Defend the Rivers of Mt. Stara Planina (ORSP) initiative and included forest guardians and Savski nasip, a local organization fighting against residential construction in the zone of the Sava river levee and its use by motor vehicles.

Ristić said the run-of-river or hydropower plants with derivation produce “indecently” weak volumes of power and disturbs ecosystems only to make individuals and interest groups richer. The dean added there are other ways to work on energy security.

Activists are demanding from President Aleksandar Vučić and Prime Minister Ana Brnabić to fulfill their promises and suspend the construction of such structures in protected areas and to form a commission that would include external experts and nongovernmental organizations.

University professors, academics and scientists supported the demand for a ban on small hydropower plants in Serbia

“While the whole world is abandoning the use of coal for the production of energy, our state decided to build two thermal power plants to burn the dirtiest fuel. Lignite is full of toxic arsenic and mercury, which are directly emitted into the air, and no filters exist for them,” said Dragana Đorđević from the Institute of Chemistry, Technology and Metallurgy in Belgrade and underscored the government allowed cement factories to burn waste rubber and oil.

She added Serbia is “ideal” for the production of energy from biomass. The country’s solar power potential is 30% above Germany’s, but the resource isn’t being considered at all, and the situation is similar with geothermal water, in her words.

Đorđević: The government isn’t considering solar power at all despite strong potential

Aleksandar Jovanović Ćuta from ORSP noted the government declared the Stara planina mountain a protected area, but that it has allowed investors to divert its rivers into pipes for small hydropower plants. He repeated an environmental autonomy would be introduced there and that citizens have the right to implement the law as long as the state ignores it.

Citizens have the right to implement the law as long as the state ignores it, said Aleksandar Jovanović Ćuta from ORSP and said Stara planina would become an environmental autonomy

Small hydropower plants must be banned everywhere and not just in protected areas, Jovanović stressed and insisted the existing facilities must come under review. ORSP is halting all communication with Serbian authorities and discussions are possible only in a direct transmission by state broadcasting service – RTS, he said.

Bojan Simišić from Eko straža, an informal group mostly tracking air pollution, asserted the Government of Serbia is downplaying the issue and neglecting long-term mortality. Funds for the purpose have been “busted” while real polluters are ignored or even supported, he said and highlighted the extent of energy poverty and fires on landfills.