Photo: Signing of the contract (EMS) 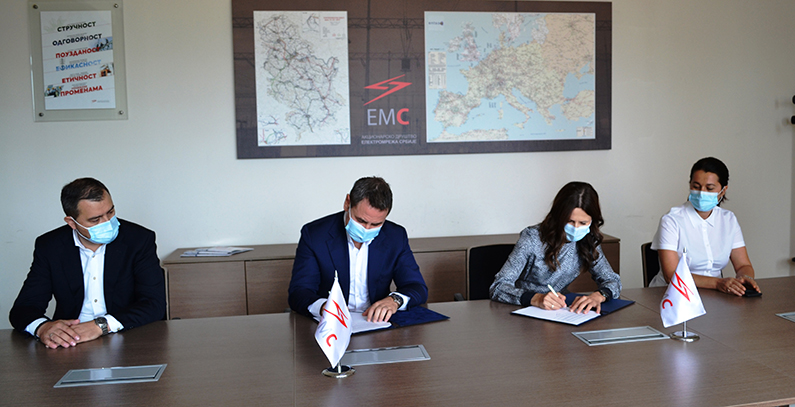 The works include the construction of a 400 kV switchyard and 400/220 kV transformer in Kraljevo 3 substation, and equipping a 400kV feeder bay in the 400/110 kV Kragujevac 2 substation.

The contract was signed by EMS’s General Manager Jelena Matejić and the consortium’s representative Ilija Labus. The group has 610 days to finish the job.

The Trans-Balkan corridor is a project of significant national and regional importance. It couples the electricity markets of Romania, Serbia, Bosnia and Herzegovina, Montenegro, and Italy. The first phase in Serbia was finished in December 2017, while Romania deployed its section of the corridor in May 2018.

The investment in the second phase is estimated at EUR 29.6 million

The second phase of the corridor in Serbia has two lots. Lot 1 includes the construction of a 400 kV power line between substations Kragujevac 2 and Kraljevo 3. The contract for it was signed in March, while construction started in mid-June in Kragujevac.

The works on lot 2 are expected to start soon, EMS said on its website.

The investment in the second phase is estimated at EUR 29.6 million. The project is funded by a EUR 15 million loan secured by KfW, a EUR 6.5 million grant from the European Union’s Western Balkans Investment Framework, and from own resources of EMS.

EMS’s CEO Jelena Matejić said the second phase of the Trans-Balkan Electricity Corridor would bring improvement of the power transmission infrastructure and stability of power supply in the central parts of Serbia.