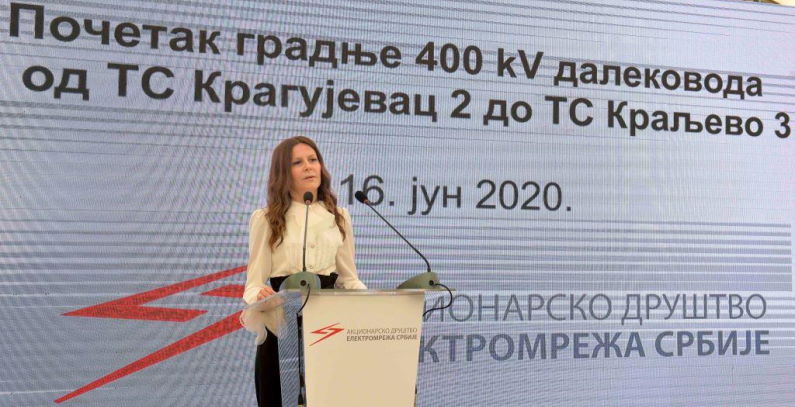 A ceremony was held for the start of the construction of a 400 kV overhead power line that will link Kragujevac and Kraljevo in Serbia. The works are part of the second part of the first phase of the Trans-Balkan Electricity Corridor. According to the schedule, they must be finished in 610 days.

The entire 220 kV network and the equipment, which is 50 years old on average, will be replaced, said General Manager of Elektromreža Srbije (EMS) Jelena Matejić. “We are creating a new reality and bringing new possibilities for development. Nowhere in the world is there economic progress or investment without an adequate and reliable electric power infrastructure”, she underscored and stressed losses in power would be lowered and, with them, the carbon dioxide emissions.

The second section is worth EUR 29.6 million in total

The length of the power link between substations Kragujevac 2 and Kraljevo 3 will be sixty kilometers, and the contract is worth EUR 13.5 million. Kodar energomontaža is the consortium lead and Elektromontaža from Kraljevo and Elnos BL from Banja Luka in Bosnia and Herzegovina are its members.

The aforementioned second section, valued at EUR 29.6 million, includes upgrading substation Kraljevo 3 to 400 kV and equipping Kragujevac 2 with one 400 kV feeder bay. The investment in the first part came in at EUR 27 million, while EUR 100 million is envisaged for the third and fourth section. It means EUR 157 million would be spent on the first phase of the Trans-Balkan Electricity Corridor: from Serbia’s border with Romania to Montenegro, EMS said.

Antić: The Kragujevac-Kraljevo power line is necessary for the construction of pumped storage hydropower plant Bistrica

The entire project will link Ukraine with Italy across Southeastern Europe and enable the development of energy projects and power trading, Minister of Mining and Energy Aleksandar Antić said. The section from Pančevo to the Romanian border integrated wind power plants in Banat region into the system, and the Trans-Balkan Electricity Corridor is one of the key tools for using renewable energy potential, he asserted.

“By building this overhead electricity line, we will enable a more stable operation of hydropower plant Bajina Bašta, and the connection is one of the key steps for the construction of pumped storage hydropower plant Bistrica, which is one of the most important strategic projects,” Antić added and stressed the project design is underway for the section between Obrenovac and Bajina Bašta.