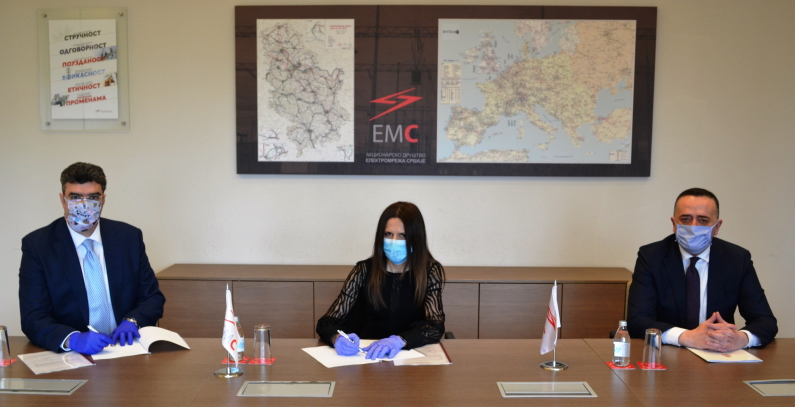 Kodar, Elektromontaža and Elnos BL will connect Kragujevac and Kraljevo with an overhead transmission link. EMS picked the consortium for the EUR 13.5 million project, while with substation upgrades the section of the Trans-Balkan Electricity Corridor is worth EUR 29.6 million.

Elektromreža Srbije jsc – EMS signed a deal with a consortium on the construction of a 400 kV overhead power link. General Manager Jelena Matejić highlighted the significance of the Kragujevac-Kraljevo transmission line for the stability and security of power supply in central Serbia but also noted it is a section of the Trans-Balkan Electricity Corridor.

She said the project connecting two substations was awarded to a group of mainly domestic companies. It is led by Kodar energomontaža doo from Belgrade. The remaining members are Kraljevo-based Elektromontaža doo and Elnos BL doo or Elnos Group, which has headquarters in Banja Luka in neighboring Bosnia and Herzegovina.

Mladen Žujković from Kodar signed the contract on behalf of the consortium.

The Trans-Balkan Electricity Corridor now connects Serbia with Romania and Eastern Europe and it will later link it with Western Europe, Minister of Mining and Energy Aleksandar Antić said.

Substation upgrades are in next lot

The length of the power line will be 60 kilometers. Works, which are scheduled to begin in a month, and equipment are valued at EUR 13.5 million. The deadline is 610 days. The project to connect Kragujevac and Kraljevo with the transmission line is a part of the corridor’s second section, which includes the substations on both sides. The overall worth is EUR 29.6 million.

Kraljevo 3 will be upgraded to 400 kV and the Kragujevac 2 substation will be equipped with one 400 kV feeder bay, EMS said and revealed contractors should be picked soon.

The first section was a double circuit 400 kV line from Pančevo, just northeast of Belgrade, to the Romanian border. It was finished in December 2017.