Decarbonization is next step in development of district heating, cooling systems 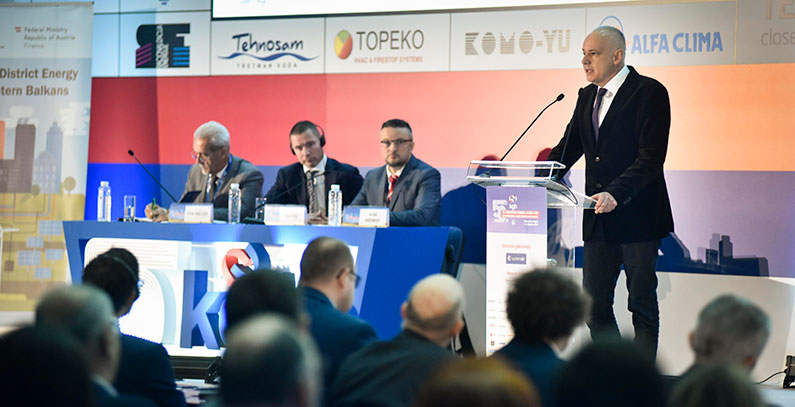 The use of renewable energy sources in district heating and cooling systems can substitute fossil fuels without increasing prices for customers, while bringing benefits in environmental protection. Solar thermal projects, geothermal energy, heat pumps, waste heat and biomass are currently the most common models for increasing the share of renewables, while the use of electricity from wind farms and solar installations in district heating and cooling systems is becoming increasingly popular.

These are some of the key takeaways from the regional conference Renewable Energy Sources in District Heating and Cooling Systems held in Belgrade yesterday and today. The event was organized by the European Bank for Reconstruction and Development (EBRD) and the Federal Ministry of Finance of Austria, in partnership with the International Renewable Energy Agency (IRENA), and was part of the 50th International HVAC&R Congress and Exhibition.

The conference was opened by Belgrade Mayor Zoran Radojičić, who announced the adoption of an action plan for the district heating and cooling system for early next year. He also said that the city is drafting a Green City Action Plan and a Sustainable Energy and Climate Action Plan, as well as preparing its candidacy for the European Green Capital Award.

Zsuzsanna Hargitai, EBRD Director for the Western Balkans, said that the bank, together with the Austrian government, has established the Renewable District Energy in Western Balkans (ReDEWeB) fund with an idea to promote renewables development in the region.

Luca Angelino, programme officer at IRENA, stressed there is a lot of work ahead for everyone, not only in the region but in the whole world.

IRENA data shows that over 170 GW of renewable energy was installed in the power sector in 2018, an increase of 8% compared to the previous year. However, the heating sector, which account for nearly 50% of global energy consumption, is seriously lagging behind. The global share of renewables in the heating sector is only 10%, compared with 26% in the electricity sector.

Decarbonization of district energy is technically and economically feasible, but it is necessary to act at both local and, national level, he said.

What are the trends in renewables use in district energy in Europe? 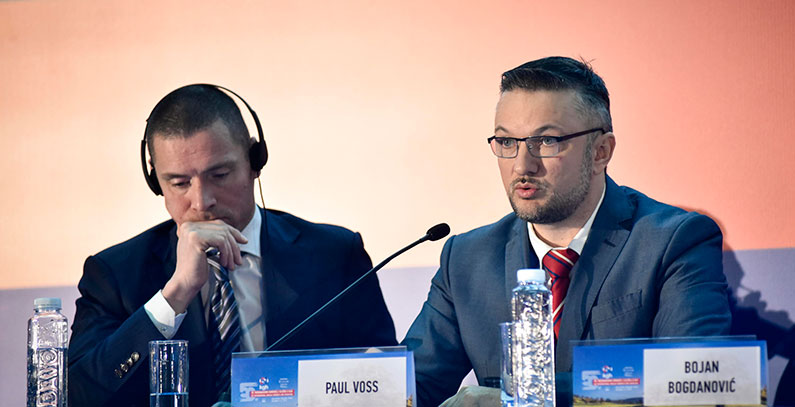 Opening the working part of the conference (all presentations can be downloaded under the article), one of the three chairmen, Bojan Bogdanović, Principal Fund Manager, Renewable District Energy, EBRD, said that the majority of the population don’t deny climate change.

However, he said, this puts our industry in front of a great challenge – how to provide renewable energy in a sustainable and affordable way?

Dušan Macura, head of heat production and distribution at public heating utility Novosadska Toplana, said that before introducing renewables the local authorities must draw up a district energy development strategy and then modernize the network. An important milestone in the development of district energy took place in the EU in 2017, when more energy was generated at wind farms than in cogeneration plants.

New systems must be hybrid and ready to use electricity when available, for example at night from wind farms

According to Macura, new district energy systems must be hybrid and ready to use electricity when available, for example, at night from wind farms.

In Germany and the Netherlands, district heating utilities are increasingly installing hybrid substations, with heat pumps, which is another consequence of the increasing availability of electricity from renewables, he said.

The use of this model is a reality in the EU, said Paul Voss, managing director of Euroheat and Power, adding that the new European Commission has also shown interest in this solution.

The transition of district heating systems from fossil fuels to renewables is more and more visible every day, he said. The use of coal and gas is declining and the use of biomass, solar thermal solutions, geothermal energy, and waste heat is increasing, according to Voss.

The share of renewables in district heating plants in the EU is 19.5%, while in Serbia it is about 0.37%, said Dejan Stojanović, director of the Serbian Association of District Heating Plants.

Without subsidies, the introduction of renewables in Serbian heating plants is very difficult

Without subsidies, the introduction of renewables in district heating systems in Serbia is very difficult, he added.

He advised public heating utilities to be careful when selecting new energy sources and technology, as costs can jump at the time when revenue from the investment is supposed to be collected. The situation will be much clearer when the World Bank’s study on 60 district heating systems is Serbia is finished.

The implementation of Eko Toplane’s district heating project in Banjaluka in Bosnia and Herzegovina was presented as an example of good practice. Switching to biomass has resulted in a cut in CO2 emissions and an improved air quality, board member Dejan Jovišević said. In his words, the second phase will be the reconstruction of the distribution network, as well as the improvement of energy efficiency and digitalization.

Due to inaction by local municipalities regarding district heating systems, Serbia’s government had to launch a joint project with KfW to shift from fossil fuels to biomass, according to Miloš Banjac, assistant energy minister in charge of renewable energy sources and energy efficiency. He urged public heating utilities to divest of fossil fuels.

The next step is the unbundling of these utilities, to separate production from transmission in order to allow for all heating sources to be used, Banjac said.

BigSolar projects for Pančevo and Bor 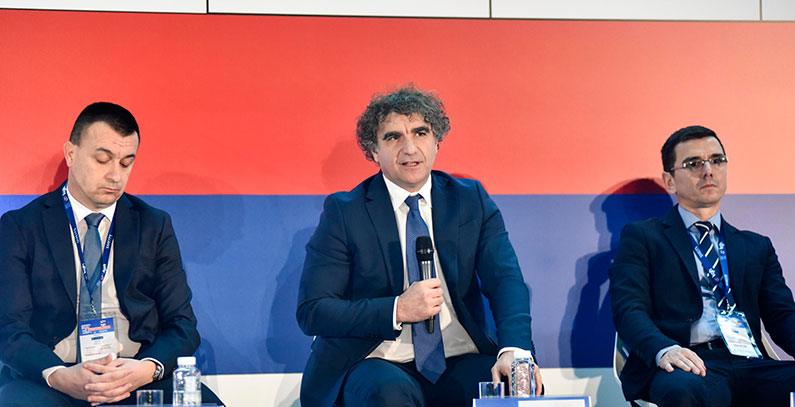 The European Bank for Reconstruction and Development (EBRD) is preparing a feasibility study for solar thermal projects for Bor, Novi Sad, and Pančevo in Serbia.

Representatives of Austrian solar engineering company Solid presented studies for Bor and Pančevo. According to Hrvoje Milošević, Sales Manager at Solid, the goal was to assess and compare the most promising solutions, sites and scenarios for implementing large-scale solar district heating (BigSolar) systems including seasonal storage in the two cities.

Solar collectors would provide 24.3 GWh, and the storage an additional 1.9 GWh in Pančevo

The Pančevo district heating plant is currently expanding its 700 kW solar power plant – the only one in Serbia connected to the district heating system – to more than 1 MW. Good experience has encouraged its management to start developing a solar thermal project, which involves the installation of 35,000 square meters of solar collectors, with an annual production of 24.3 GWh, and an underground, seasonal, 150,000-cubic meter storage facility which will provide 1.9 GWh.

The technology enables the use of solar thermal energy both in summer months, when it is the most available, and in the winter, by using surpluses stored in a seasonal storage facility. Among other benefits, the project should reduce the consumption of natural gas used by the heating plant in Pančevo.

Šabac is one of the few cities in Serbia that has launched several projects to meet the standards of the fourth-generation district energy systems. Slobodan Jerotić, director of public heating utility Toplana-Šabac, said the ultimate goal of the company is to ensure energy independence.

The modernization of the system will continue with the installation of a biomass heating plant next year, an 8 MW heat pump is planned for the utilization of waste heat from the wastewater treatment plant, and cooling services will also be offered to citizens, he said.

The investments are lifting the price of heating for consumers, so the utility decided to use the ESCO model in order to make its heating services affordable to citizens, according to him. The EBRD has approved a EUR 2.5 million loan, which will be on-lent to private homeowners for energy rehabilitation, the utility’s boss added. Consumers’ bills will be lower, and the loan installments will be included, Jerotić claimed.

Belgrade’s public heating company Beogradske Elektrane will also start using alternative sources of heat thanks to Belgrade’s Vinča landfill project for the construction of an energy-from-waste facility to incinerate municipal waste and a mobile power plant fueled by landfill gas.

The cogeneration plant and the mobile landfill gas power plant will meet 5% of Belgrade’s electricity demand and 9% of its heat demand, while CO2 emissions will be reduced by 307,000 tonnes per year compared with the use of natural gas, said Vladimir Milovanović, director of Beo čista energija, a special-purpose vehicle for the implementation of the project.

What does the District Energy Action Plan for the City of Belgrade through 2040 envisage? 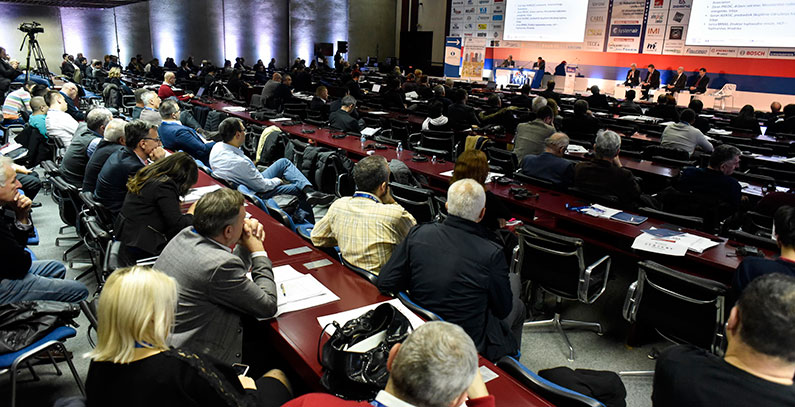 Organized by IRENA, in cooperation with the EBRD, capacity building sessions titled “Energy Solutions for Cities of the Future: Facilitating the Integration of Low-Temperature Renewable Energy Sources into District Energy Systems” included a presentation of a case study from Belgrade. It was prepared under the District Energy in Cities Initiative, led by the UN Environmental Program (UNEP). The case study was prepared by Enova, OPTIT, as well as the University of Belgrade’s Faculty of Mining and Geology and the RES Foundation.

The long-term plan envisages the construction of CHP plants, and the integration of the heat network

Dejan Ivezić, professor at the Faculty of Mining and Geology, presented the District Energy Action Plan for the City of Belgrade for the next 20 years. He said that the shorter version, through 2030, envisages the Vinča landfill project, a heat pipeline between thermal power plant Nikola Tesla A and the heating plant in New Belgrade, the closure of inefficient heating stations, the construction of combined heat and power plants (CHP), the integration of the heat network… The long-term plan, for the period 2030-2040, is paving the way for the transformation of public heating utility Beogradske elektrane into a fourth-generation district energy system, the use of solar energy, geothermal energy, waste heat, and heat pumps, as well as the introduction of cooling as a service…

Romanas Savickas, expert from the UNEP DTU Partnership, presented a project for the installation of a solar thermal facility at the Cerak district heating plant in Serbia’s capital city.

“If a project like this is possible in Denmark, it is possible in Serbia as well. It is technically possible, of course, but is it economically viable, that was the question. The answer is that it is,” he said.

Matteo Pozzi of OPTIT elaborated on the results of the implementation of an application for the development of interconnections in the district heating system of Beogradske elektrane. The aim of the study was to answer how to plan district heating and cooling network development roadmaps that maximize the return on invested capital, among countless possible options.

More than 100 potential investment scenarios have been considered and analyzed, and the best interconnection solutions explained in detail, he said.

Annamaria Nador, Mining and Geological Survey of Hungary; How can geothermal resource assessment and mapping influence decision-making for district heating: Experience from Hungary and the Danube Region

Jakob Zinck Thellufsen, Technical challenges, and solutions for the integration of low-grade heat sources into existing networks and buildings Belgrade

Slobodan Jerotić, Toplana Šabac: Synergy of application of energy efficiency measures and renewable energy sources as a condition for securing the competitiveness of the district heating systems