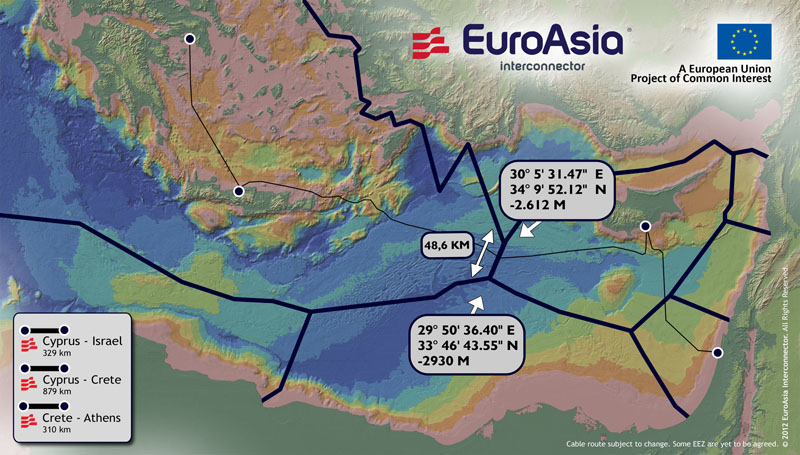 Work on an electric cable linking the power grids of Israel, Cyprus and Greece is to start in the first quarter of 2018 and is expected to last until 2022.

Israeli regulators are expected to give their approval next month, announced Nasos Ktorides, head of the EuroAsia Interconnector project. Greek and Cypriot regulators’ expected approval will mark the official beginning of the project. Its first phase will have an estimated cost of around EUR 3.5 billion, reports ekathimerini.com.

The 1520 km undersea electric cable with a 2 GW capacity will be able to both receive and transmit electricity.

The project emerged amid improved relations between the three counties, coupled with the discovery of gas deposits in the east Mediterranean that could be used to generate electricity.

The design for the EuroAsia Interconnector project is included in the European Union’s 195 Projects of Common Interest.  The Projects of Common Interest (PCIs) on the list will help deliver Europe’s energy and climate objectives and enable the gradual build-up of the Energy Union by integrating the energy markets in Europe and by diversifying the energy sources and transport routes. It will help bring an end to the energy isolation of some Member State and will also increase the level of renewables on the grid, reducing carbon dioxide emissions.

Earlier this year, in January, the unrecognized Turkish Republic of Northern Cyprus ratified an agreement with Turkey on the construction of an underwater electrical cable. The agreement includes the renewal of electricity infrastructure, development of electricity supply security, the construction of interconnected system, mutual cooperation on renewable energy, the application of energy regulations as well as exploration of new oil and natural gas resources.

The following month, Greece, Cyprus and Egypt signed a memorandum on the completion of a study for the construction of the EuroAfrica Interconnector, an underwater electric cable connecting the power grids of those countries with continental Europe. The 1.648 kilometer cable will be one of the longest in the world, with a capacity of 2.000 MW.

“Greece will increase its energy efficiency, and will become a major player in the European energy arena, Cyprus will be an electricity hub in the south eastern Mediterranean and Egypt will become an important energy hub for Africa,” said Nasos Ktorides, head of the EuroAfrica Interconnector project, indicating that this partnership can only bring benefits to all three participating nations.