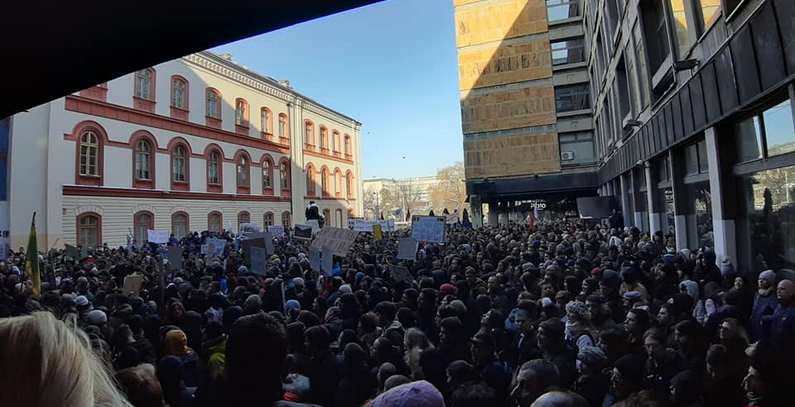 A few thousand citizens from all over Serbia gathered at Belgrade’s Faculty of Philosophy square to rally with a single demand – the immediate halt of the construction of small hydropower plants (SHPPs). The organizer of the rally, the Defend the Rivers of Mt. Stara Planina movement has submitted a request for the construction of the SHPPs to be stopped to the Government of Serbia. The protesters also handed a letter to Serbian President Aleksandar Vučić, written by residents of Mt. Stara Planina, asking him to help curb the construction of SHPPs. On the other hand, investors in SHPPs, which recently founded an association, said in a press release that the “malicious campaign” is led by people who have political ambitions and seek personal promotion.

The rally, which gathered citizens from across Serbia, including Bela Crkva, Pirot, Paraćin, Kraljevo, Knjaževac, Brus, and Kosjerić, started with a moment of silence for all the rivers that were “killed” by the construction of SHPPs. Speakers at the rally singled out the Vlasina, Studenica, Crni Rzav, Mlava, Jošanica, Rakitska Reka, and Gobeljska Reka as some of the investors’ victims.

At the Faculty of Philosophy square, protesters had the opportunity to hear from Aleksandar Jovanović Ćuta, Goran Tokić and Aleksandar Panić, representatives of Defend the Rivers of Mt. Stara Planina, Minja Nikolić from the village of Temska, Desimir Stojanov from the village of Rakita, Jelena Drmanac from the spa town of Jošanička Banja, and Ratko Ristić, dean of the University of Belgrade’s Faculty of Forestry.

Protesters carried banners that read “Serbia, don’t give up on your rivers,” “Liberate water,” “Environmental mafia is killing rivers just for profit,” “Warning! Investors in SHPP are not welcome”… 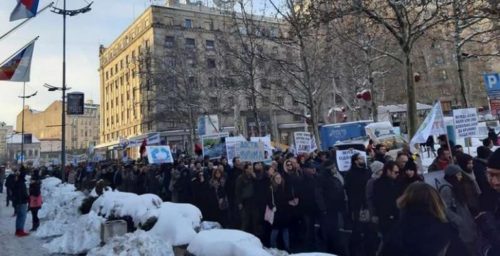 Shouting “we aren’t giving our rivers away,” “rivers to the people,” “say no to SHPPs,” protesters marched through the streets of Belgrade, to the main government building. During the march, protesters also handed a letter from the residents of Mt. Stara Planina to the President of Serbia.

Outside the main government building, speakers included Predrag Simonović, professor at the Belgrade University’s Faculty of Biology, Iva Marković of the Right to Water initiative, Oliver Ilić, a representative of the Savski Nasip group, and Dušan Mitić, who has been campaigning for the Topodolska river for several decades.

“We only ask for rivers to continue to flow”

Aleksandar Jovanovic Ćuta called on citizens not to pay fees for privileged electricity producers because this money is paid to companies which are piping rivers.

The initiative Defend the Rivers of Mt. Stara Planina is not a political movement

He sent the message to the Serbian President that citizens only ask for the rivers to continue to flow, and asked him if that was a lot to ask.

“Defend the Rivers of Mt. Stara is not a political movement, and anyone who wants to be a political profiteer is not welcome,” Jovanović said. 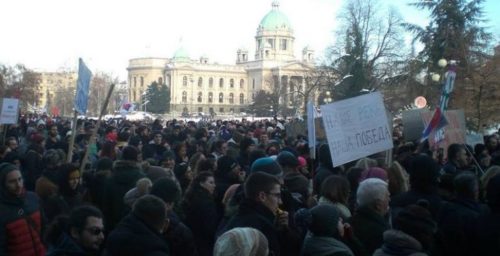 “I visited with my colleagues 46 HPPs in Serbia and the situation is devastating. Fishways do not work, the biological minimum is not respected, and the local population’s traditional activities are hindered,” he said.

Do not send bulldozers to the villages, send us the tractors instead

Minja Nikolić from the village of Temska said that the inhabitants of this village started an avalanche that reached Belgrade.

She asked the relevant ministers whether they know how people live in villages, and asked the Serbian President not to send them bulldozers but tractors instead.

Letter from residents of Mt. Stara Planina handed over to Serbian President

“Today the people came to tell their leader that they are not giving their rivers away,” he said, adding that the killing of rivers is the last act of driving people off Mt. Stara Planina. 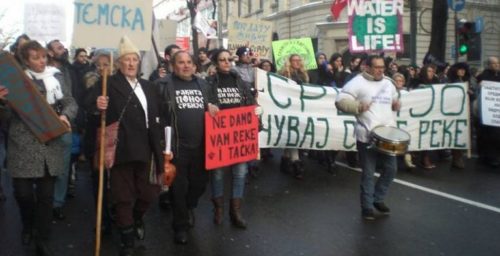 Along with the letter, protesters left for the President a jug of water from the streams of Mt. Stara Planina, which, as Ilić said, are endangered by the investors.

Investors deprive the local population of the right to life

“Selfish urban investors, skillful in frauds and finding loopholes in the law, out of greed for profit, have no fear in destroying nature forever. They disturb the traditional natural order in the mountainous regions, depriving the local population of the right to life and survival at their hearthstones. The 2% energy savings in the transmission system is equal to the production of all planned SHPPs, making their construction and destruction of Serbian rivers unnecessary, and meaningless. The support for the SHPPs means benefit for the investor, and the damage to the people,” the letter reads.

SHPPs have least impact on environment of all renewables – National Association

The National Association of Small Hydropower Plants has said that the protest represents a politicization of something that should not be a matter of politics and that SHPPs have the least impact on the environment compared to other renewable energy sources.

In its press release, the association expressed its regret that a small part of the public supported a malicious campaign it said was waged for a year and a half by a number of people with political ambitions and seeking personal promotion.

SHPPs built in the last 10 years and those now built in Serbia have been constructed in accordance with all laws and by-laws harmonized with EU legislation, and according to the National Renewable Energy Action Plan (NREAP), the press release reads.

According to the press release, citizens are not familiar with the potential and the environmental advantages of SHPPs, and for this reason, a negative image surrounding their environmental impact has been created.

SHPPs have the smallest impact compared to all other renewable energy sources and 250 times smaller than thermal power plants, according to the press release.

It is important to note that their environmental impact only refers to the construction phase, but not during the exploitation period, the association said.

For more than a year and a half, a malicious campaign against SHPPs has been waged by people with political ambitions

The association advocates respect for the law and for energy generated from renewables, while ensuring the preservation of nature.

This is the only appropriate and possible way to reach an obligation towards the EU and for citizens of Serbia to have a 27% share of renewable energy sources by 2020, because otherwise, energy will have to be imported, the association said, adding that it is well known what import means for taxpayers and the future generations.