Photo: Ministry of energy and mining, Republic of Serbia 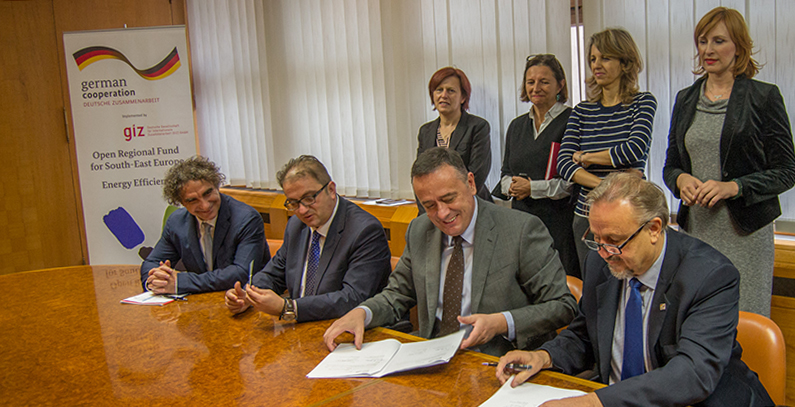 The German development organization Deutsche Gesellschaft für Internationale Zusammenarbeit (GIZ) GmbH has officially handed-over, to the Serbian Ministry of Mining and Energy, the Monitoring and Verification Platform (MVP) aimed at the improvement of data collection and monitoring, including coordination of activities and monitoring of progress in the field of energy efficiency. The online based MVP system was developed within the GIZ Open Regional Fund for South-East Europe – Energy Efficiency (ORF-EE) project.

The MVP Hand-over agreement was signed on September 22 by Aleksandar Antić, Serbian Minister of Mining and Energy, and Heinz Dieter Harbers, Deputy Director of GIZ in Serbia.

Antić said on this occasion that the mechanisms for control and monitoring of energy efficiency measures are of great importance for Serbia, adding that the country is lagging behind almost all other European countries when it comes to the energy efficiency. He said that one of the Ministry’s priorities is to raise Serbia’s citizens awareness on the necessity of rational use of energy.

Berina Delalić, GIZ ORF-EE Technical Expert, responsible for guiding the implementation process oft he MVP, said that signing of the agreement is an important step for the GIZ.

“The MVP Hand-over event represents an important step forward in our cooperation with the Ministry of Mining and Energy of the Republic of Serbia, which has officially taken over the MVP system today, and is initiating its independent use for monitoring of the implementation of energy efficiency projects and energy savings, including the reduction of CO2 emissions. We are particularly pleased that Minister Antić recognized the role and importance of this web-based tool for energy efficiency for the Republic of Serbia,” she stated.

The MVP application was designed for South-East European countries as a platform for data collection on energy efficiency projects and achieved energy savings.

Croatia, which was active partner country of the ORF-EE until 2013 when it became a member of the EU, has pioneered the implementation of the MVP system in SEE. It has already integrated the MVP in its administrative system.

Other SEE countries are also in the process of implementation of the MVP for wider use. Kosovo and Montenegro have also already included MVP in their national systems.

The platform enables data sharing between several responsible actors, thus avoiding overburdening of one person or one institution. The municipalities therefore collect data for the area of their responsibility and upper administrative levels fill in the gaps.

The platform also provides space for data storing in one specifically assigned place and renders it easily available for all relevant actors.

MVP aims at improving coordination between relevant national actors in the energy efficiency sector. It allows for data storing about existing plans and programs on different policy levels, as well as for inclusion of all relevant actors. This way, institutions have an opportunity to monitor progress of their activities and receive the insight into plans and programs of other actors in the energy efficiency field.

MVP as a product developed in SEE region has also been transferred to several EU countries.