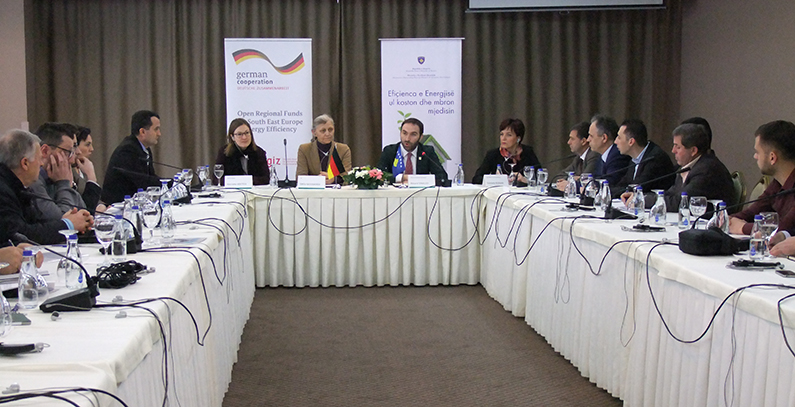 As a result of a longstanding and successful collaboration in the field of energy efficiency, the German development organization Deutsche Gesellschaft für Internationale Zusammenarbeit (GIZ) GmbH handed-over to the Kosovo Government the Monitoring and Verification Platform (MVP) and  complementary manual.

The handover, that took place in Prishtina on 21 February, was followed by a training on MVP, which was attended by representatives from municipalities and central governmental institutions. Participants were introduced to the monitoring and verification platform and instructed on its use.

The handover agreement was signed by Minister Blerand Stavileci and, on behalf of the GIZ, Ottilie Mooshofer. Minister Stavileci emphasized the importance of the platform for Kosovo, and thanked the German Government, including the GIZ for an extraordinary cooperation in the field of energy, especially emphasizing the collaboration in the sector of energy efficiency.

Representative from the German Embassy in Kosovo, Mrs. Henriette Koetter accented that the implementation of the Third National Energy Efficiency Action Plan (NEEAP III; 2016-2018) is a crucial task for the Kosovo Government and added that the support of the German Government to Kosovo in the field of energy efficiency will continue.

The provision of the MVP platform to Kosovo, which is one of the partner countries of the GIZ Open Regional Fund for South-East Europe – Energy Efficiency (ORF-EE) project, has the aim to support a more efficient approach to policy formulation in the energy efficiency sector, also furthering the achievement of the EU 20-20-20 energy saving and climate protection targets that all ORF-EE South-East European partner countries have committed themselves to.

ORF-EE has been supporting the countries in the region of South-East Europe since 2010 in their efforts to establish a strong and sustainable structure for preparation, implementation and monitoring of Energy Efficiency Action Plans in accordance with the Directive 2006/32/EU. In reference to this, in collaboration with the country representatives in the Energy Efficiency Coordination Group of the Energy Community, the Monitoring and Verification Platform (MVP) – an innovative web-based software for monitoring of the implementation of energy efficiency and the CO2 emission reduction plans at all policy levels, has been developed and adapted to the specific languages and needs of the different partner countries.