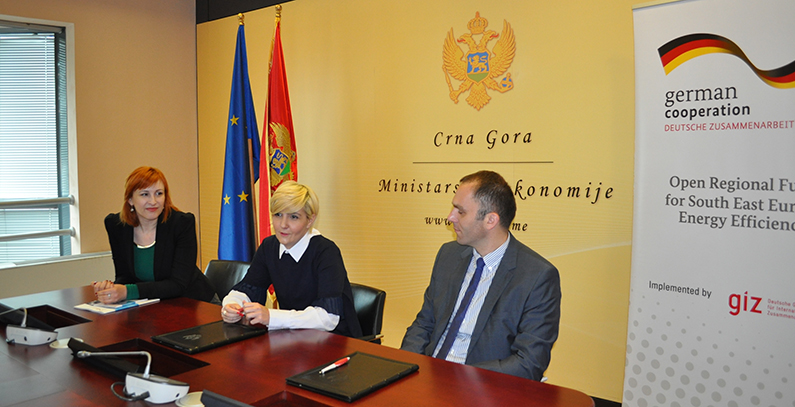 The objective of the handover of the Monitoring and Verification Platform (MVP) to the Ministry of Economy of Montenegro, as partner of the Open Regional Fund for South-East Europe – Energy Efficiency (ORF-EE) project, is to provide support for more efficient and effective policy formulation in the sector of energy efficiency, Deutsche Gesellschaft für Internationalle Zusammenarbeit (GIZ) GmbH said.

Other important objective is to assist the government in the process of achieving European Union’s energy efficiency and climate protection 20-20-20 goals, the press release adds.

On April 28, Montenegro was officially given the software and a complementary manual, developed by the German organization. The meeting was attended by ORF-EE representative Jasna Sekulović, GIZ Deputy Country Director for Montenegro Nenad Rakočević and  Director-General of the Directorate for Energy Efficiency of the Ministry of Economy of Montenegro Dragica Sekulić.

“Under the auspices of the Energy Community (EnC), the regional project GIZ ORF-EE also supports governments of Albania, (FYR) Macedonia, Serbia, Kosovo and Bosnia and Herzegovina, in the development of the program for monitoring and verification of policies in the field of energy efficiency” GIZ ORF-EE representative, Jasna Sekulović stated. In the first phase, methodologies for monitoring the implementation of national energy efficiency action plans were developed, which are an obligatory policy instrument according to the EU Energy Services Directive (2006/32/EU). These were, later on, complemented with a central monitoring tool – the Monitoring and Verification Platform (MVP). MVP is an online platform and allows for monitoring of any number of energy efficiency or climate change mitigation plans, be it on the national, regional or local level, GIZ said. MVP also provides policymakers with bottom-up data on various implemented projects allowing for cost-benefit comparison and evaluation of the effectiveness of different policy schemes. In addition, the platform enables exchange of data between the local and national level, helping to improve the coordination between them. The tool is also suitable for reporting towards the office of the Covenant of Mayors, reporting under the United Nations Framework Convention on Climate Change, and towards other important national and international institutions.