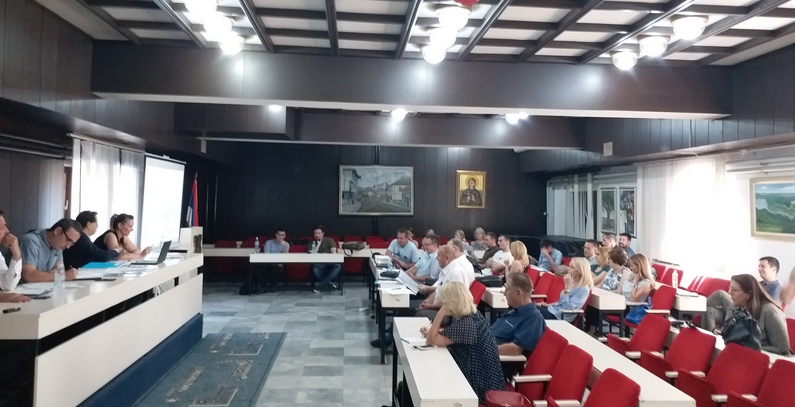 A public consultation on two environmental impact studies conducted for the Belgrade waste management project – specifically an energy-to-waste facility to incinerate municipal waste and use landfill gas and a new landfill to be built in the Serbian capital’s suburb of Vinča – has shown that there is still a lack of information concerning the project, resulting in public mistrust.

In September 2017, the City of Belgrade signed a 25-year public-private partnership (PPP) agreement with a consortium of France’s Suez Groupe and Japan’s Itochu for the closure and remediation of the Vinča landfill and the construction of a waste-to-energy cogeneration facility (waste incinerator) to produce heat and electricity.

The public consultation, scheduled by the Ministry of Environmental Protection, was held on the premises of the suburban municipality of Grocka, bringing together some 30 plus participants.

Will the incinerator operate in line with the EU’s latest standards set in BAT?

The initiative Don’t Let Belgrade D(r)own (Ne Davimo Beograd), which has once already managed to get the studies pulled, raised the objection that the new studies did not take into account the EU’s new Best Available Techniques (BAT or BREF) referring to this kind of facilities’ rules of operations and limit values for harmful emissions.

The EU recently tightened the rules, which are expected to take effect shortly, and this will have a direct impact on the technology to be used at the facilities in Vinča, said Vladimir Radojičić of Don’t Let Belgrade D(r)own.

This makes it strange that the studies were conducted in line with the currently applicable BAT rules, which will not apply once the incinerator and landfill are opened, according to him.

Nebojša Pokimica, managing director of Dvoper, the company that conducted the two studies, responded by saying that he understands these objections, but that the studies could not be conducted in line with BAT rules that are not yet officially in force. He claims that there is no reason for concern, citing the Serbian legislative provisions according to which a new facility is not allowed to start operating if it is not in accordance with the applicable BAT rules. Once the new BAT rules take effect, the incinerator and landfill projects will be aligned with them, if necessary, according to him.

Still, it remained unclear whether the incinerator and new landfill projects are already designed in line with the new BAT rules and if not, whether they will have to be changed and whether new environmental impact studies will need to be produced.

Zvezdan Kalmar of the Center for Ecology and Sustainable Development (CEKOR) wanted to learn how ash from waste incineration will be transported and stored given the bad experiences citizens have with coal-fired power plants owned by state power utility Elektroprivreda Srbije (EPS), as well as what happens after the 25-year PPP agreement expires.

Ash will be stored in separate cells and dust creation will be prevented with the use of water, safe transportation, and a sprinkler system, Kerkar said, adding that due to public concern, the study will be expanded to include a detailed model used for ash emissions.

After the PPP agreement expires, the landfill will have the capacity to receive another 1.2 million tonnes of waste, which gives the City of Belgrade several years to decide how to proceed in this area, he said.

Questions were also asked about matters that are not directly connected to the two environmental impact studies but are important in order to understand what’s in store for citizens. These questions arose due to a lack of information in the project preparation procedure so far, especially concerning how the City of Belgrade decided to select an incinerator as a waste management solution, as well as in the PPP agreement.

The key question concerned Belgrade’s waste management strategy and whether the city even has it.

Vladimir Radojičić of Don’t Let Belgrade D(r)own said that the environmental impact studies contain no data on waste quantities generated by Belgrade or its composition, which is important for an assessment of the project.

Why was incineration selected as a solution? Why was the project not preceded by primary selection and recycling? How will Serbia achieve the EU’s 50% recycling target if it intends to incinerate it? These were some of the questions asked.

Trying to provide answers, Nebojša Pokimica of Dvoper, which prepared the two studies, said that primary separation and recycling are not part of the project to build the incinerator and the new landfill.

These operations were left in the hands of the City and its public waste utility Gradska Čistoća, which they can develop without any problems, he said.

Malik Kerkar of Beo Čista Energija said that he understood that participants in the public consultation wished to discuss numbers, but that the gathering was about the two environmental impact studies.

Addressing a participant who asked whether the incinerator will operate below capacity if it is not supplied with 340,000 tonnes of waste annually, which is the maximum amount it would be able to incinerate per year, Kerkar said that the capacity is well below the overall amount of waste generated by Belgrade, as well as that the incinerator can operate at 60% capacity.

Asked whether recyclable waste will be incinerated, Kerkar said that the 510,000 tonnes of waste that the City is required to deliver to Beo Čista Energija should not contain recyclable waste.

He said that he could not speak on the City’s behalf concerning the waste treatment fee that would be paid by citizens to help raise around EUR 38 million annually to be paid by the City to Beo Čista Energija.

When it comes to hazardous waste, Kerkar said that this type of waste would be returned to the City of Belgrade, as envisaged under the PPP agreement.

So far, comments on the two environmental impact studies have been officially sent by Don’t Let Belgrade D(r)own and CEKOR. The deadline to submit comments expires on August 3.