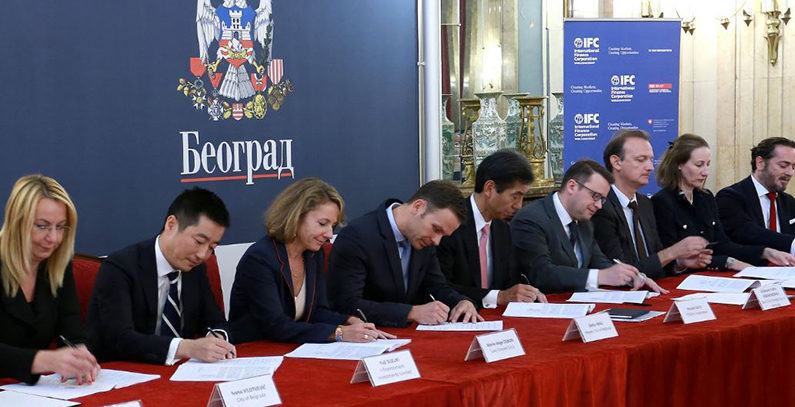 Following an international tender, an agreement on a public private partnership (PPP) was signed by the Belgrade city authorities and a consortium of the French Suez groupe and Japanese Itochu I-Environment to implement a 25-year project to develop a system to treat municipal waste of Belgrade. The agreement calls for closing and remediation of one of the largest landfills active in Europe and construction of a  waste-to-energy cogeneration facility to produce heat and electricity from non-recyclable waste.

The Belgrade Mayor, Siniša Mali and representatives of the consortium companies of Suez and Itochu  signed the largest PPP ever in Serbia for the remediation of the Belgrade municipal waste landfill Vinča and the financing, construction and long-term operation of modern waste management facilities for the Serbian capital.

Mayor Mali said the overall investment in the project stands at some EUR 300 million, and added that the agreement was signed for a period of 25 years. He said the agreement was one of the most important signed in Belgrade in the past few decades since it is to solve the worst ecological catastrophe in the region.

Under this agreement, 50/50 French-Japanese joint venture will build a 340,000 tons p.a. waste-to-energy facility with installed power production capacity of 25 MW and heat production capacity of 56 MW. Following completion of construction managed by CNIM and Serbian Energoprojekt planned for 2021, the facilities will be operated by SUEZ for a 25-year term, according to the press release the Suez groupe published on its website.

The tender was organized by the City of Belgrade with the support of International Finance Corporation (IFC), the private arm of the World Bank Group. IFC regional manager for the Western Balkans Thomas Lubeck, who advised the Belgrade city authorities on the procedures to prepare and implement the PPP, told the signing ceremony that an optimal solution had been found with experienced partners through a process which was transparent and competitive, making the project financially sustainable.

It was a pleasure to represent @IFC_ECA and celebrate the signing of the W2E #PPP contract between @beograd_rs, #SuezGroupe and #Itochu pic.twitter.com/z3mPzgbk65

Head of Regional Representation for the Western Balkans of the European Investment Bank (EIB),  Dubravka Negre  wrote on her Twitter account that this is the largest PPP contract signed in Serbia between the city of Belgrade and Suez company and  expressed interest of EIB in this project naming it “potentially the first PPP to be financed by EIB in the Western Balkans”.

The largest #PPP contract signed in #Serbia between @beograd_rs and #Suez. Potentially the first PPP to be financed by #EIB in the #WB pic.twitter.com/qLoLC0LyVo

Proven track-record of Suez and Itochu cooperation in Europe

Suez Groupe Deputy CEO in charge of International segment Marie-Ange Debon said that this is the biggest PPP project in the wider region and as such is important because it will improve Serbia’s reputation and help attract investors. It is our collective duty to do everything for this project to succeed and the SUEZ Groupe is determined to do that, she said.

.@SUEZ and its partners are confident we will succeed in bringing the best waste-to-energy facility to @beograd_rs and #Serbia pic.twitter.com/WkQH3tpZb6

Hiroshi Sato, Executive Officer at Itochu Corporation emphasized the importance of environmental protection and sustainable development in the whole world and expressed hope this project will support Belgrade and Serbia in becoming ecological and prosperous society.

SUEZ has an extensive experience with 40 million tons of waste managed annually in Europe and overseas, of which 7 million are recovered in 56 waste-to-energy facilities. SUEZ has been the first company to deliver a fully project-financed waste-to-energy facility in Central Europe under a PPP scheme, namely a 210,000 tons p.a. plant in Poznań (Poland) which started operation in 2016.

Together SUEZ and ITOCHU have an unrivalled track record of joint developments and investments in energy-from-waste projects in the UK, including the Merseyside, Cornwall, West London, and South Tyne Energy-from-Waste facilities.