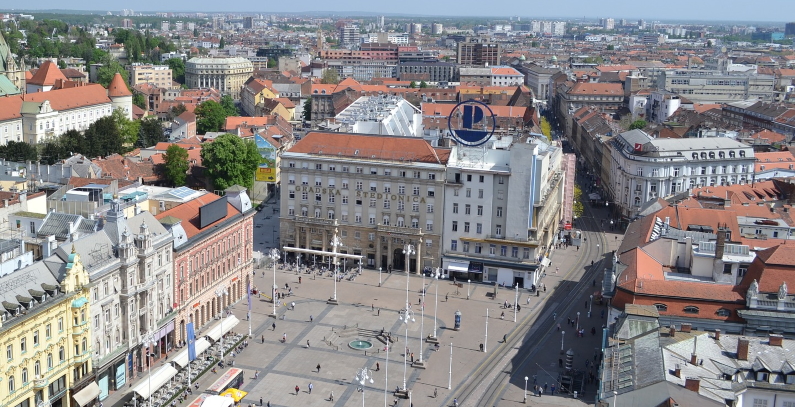 The Power Engineering and Energy Management Chair at the Department of Energy, Power and Environmental Engineering (Faculty of Mechanical Engineering and Naval Architecture, University of Zagreb) and the North-West Croatia Regional Energy Agency – REGEA

The earthquake on March 22, 2020, caused major damage in the center of the city of Zagreb, mostly as chimneys collapsed, taking with them parts of roofs and façades. The damage is disproportionately above the tremor’s strength. Furthermore, most of the central district of Donji grad became uninhabitable, as there is no more gas supply. It means heating is impossible.

How to respond to the challenge? Does it require investment aimed at getting back to the previous state or can we consider a new, better solution?

The cost of the reconstruction of a chimney is estimated at a minimum of HRK 25,000 (EUR 3,000), possibly including the costs of a condensing boiler for those who don’t have it now, while a good share of chimneys would need to be adapted for gas-fired condensing boilers at HRK 5,000 per heating device.

“The earthquake destroyed about 10,000 chimneys, so it temporarily disabled heating in one third of the buildings in the city center. As natural gas is a fossil fuel, by 2040 it will have been removed from the heating system in the European Union, which means now is the right time to involve a new heating system in the reconstruction in the city, and district heating would be the best by far,” according to professor Neven Duić from the University of Zagreb’s Faculty of Mechanical Engineering and Naval Architecture.

No future for gas in decarbonized European Union

According to the trajectory compliant with a 1.5 °C rise in temperature, natural gas will have to be excluded for the most part from heating by 2040 at the latest. It means we consider natural gas to be only a so-called transitional fuel and that it has no room in the EU’s energy future in heating. As gas equipment’s lifespan is about 20 years, and it is about to be taken out of use before the end of 2040, investments in gas must now be very prudent and limited.

The EU acknowledged in its heating and cooling strategy that central heating systems (CHS) are an optional technical solution for densely populated urban areas as it is simple to decarbonize a CHS with the use of waste heat as well as geothermal and solar energy. By all means, it is also necessary to invest in the energy and statics improvement in the structures.

The Government of the Republic of Croatia and the City of Zagreb must define a joint reconstruction concept as soon as possible for the area devastated in the earthquake. It is a national project without precedent but also a once-in-a-generation opportunity for a progressive leap. Therefore, expanding the district heating network to the districts of Gornji grad and Donji grad is suggested to be included in the renewal project.

The heating pipeline should be driven through the streets of Donji grad and Gornji grad (now it is at the edge of Donji grad). The installations must be placed vertically in buildings and set up thermal stations in every apartment. The optimal place for a thermal station is where gas boilers are now, as it is where the central heating installation enters together with the hot water feed pipe. In case there is no central heating in the apartment, the system needs to be mounted.

The investment in the ducts that go under the streets needs to be public, the expenditures for vertically placed pipes in buildings and the heating stations can be optimally divided, and tenants can pay their part of the burden through future heating bills

Which part of the investment should be covered with public funds and which individualized? The investment in the ducts that go under the streets surely needs to be public, the expenditures for vertically placed pipes in buildings and the heating stations can be optimally divided, and tenants can pay their part of the burden through future heating bills. A subsidy should be secured for a significant part of the costs of the potential overhauls and expansion of the central heating and hot water supply system. Such an approach is suggested for all buildings undergoing any significant reconstruction or new projects.

For buildings that don’t require substantial renewal before people move back in, the plan should include a transitional solution in the form of condensing boilers. If that’s not possible, electric heaters are the alternative, but with a prospect of switching to CHS as soon as possible and at least by 2040.

What do we propose?

We have the solution for the chimney issue, partly direct and partly in phases. It will always be a risk in the earthquake-prone area Zagreb was built on. We have the solution for the question of decarbonization and an open possibility for a valuable investment cycle. Zagreb also lies on vast geothermal resources – which can completely satisfy its heating needs in the future. The proposition includes a quality heating system in the Zagreb city center, it is based on domestic energy sources and it reduces the dependence on energy imports.

In order to obtain a long-term sustainable and secure energy supply in the central area of the city of Zagreb, a heating pipeline is needed. Picture 1 shows the potential distribution of such a network, in green, and the possibility to connect it to the existing network, in blue. The suggested network is just one of the potential options – in this configuration, its total length is 17.4 kilometers, and the costs for the configuration could be EUR 15 to 19 million. The downtown area has an exceptionally high density of buildings and thus a matching heating demand, which makes it ideal for the implementation of such technology. Picture 2 shows heating demand in the city of Zagreb, the planned and existing heating and steam lines, in blue, and the proposal for the expansion of the network to Donji grad, in green.

Can we finance it?

The potential source of funding for the preparation phase (study and design documentation) can be found in the Operational Programme Competitiveness and Cohesion’s (OPCC) specific objective 4c3. The said specific objective particularly focuses on increasing efficiency in district heating. The amount needed to finance the project can be found with minimal changes to the criteria for the selection of projects and the redistribution of the total allocation for the aforementioned goal.

The funds to reach the specific objective have been envisaged for use via the integrated territorial investments (ITI) tool, which is already being applied on the territory of Zagreb Urban Agglomeration. On the level of the Republic of Croatia, the entire allocation for 4c3 (EUR 80 million) can be redistributed within the ITI mechanism.

It is also possible to use funds from technical assistance (specific objective 10) or to combine both specific objectives. The share of cofinancing should be determined afterwards and the project can be cofinanced by HEP Toplinarstvo, the district heating system operator.