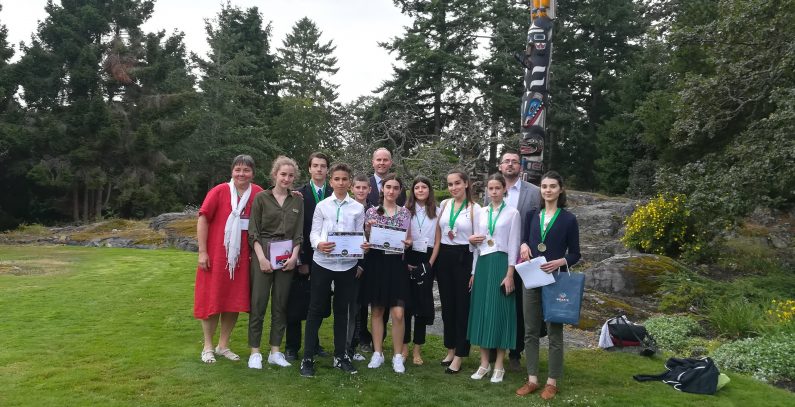 After Balkan Green Energy News appealed in early April for financial assistance to help kids from Serbia travel to Canada, its partner, the Green for Growth Fund (GGF), helped make this possible.

The nine elementary and high school students from Belgrade had already made remarkable success in a global essay competition on achieving UN Sustainable Development Goal #15 – Life on Land and needed help to take part in the award ceremony and debates on Life on Land in Vancouver, Canada.

Marina Drndarski, a biology teacher at the Drinka Pavlović elementary school, has been encouraging students to take part in this global competition, organized by the Trust for Sustainable Living, for four years now, each year with more success. This year’s nine finalists and honorable mentions from Serbia were selected among 1,470 young participants from 53 countries.

Drndarski has kindly provided all the essays that the kids from Serbia wrote for the competition.

In addition to the two gold medals won for essays, the kids from Serbia came back home with four more gold medals and two special awards from the debates.

One of the most successful debaters was also the youngest contestant from Serbia – Aleksandar Marković Ćorac, 11, won the Best Individual medal and the Debate Ambassador recognition. Marija Lubardić, 14, won the Best Group medal, in addition to winning one of the two gold medals for essays that had gone to Serbia.

The topics of essays written by the Serbian schoolchildren, in English, were quite varied. One of the essays, authored by Ivan Filip Kovačević, who is attending the Gimnazija Plus high school, was written from the perspective of the griffon vulture living in the Uvac river gorge. The griffon vulture is a species whose extinction was averted in Serbia thanks to campaigning by ornithologists and other nature lovers.

Ivan Filip Kovačević came back from the debates with one of the gold medals won there – the Judges’ Commendation.

Balkan Green Energy News would like to thank the Green for Growth Fund and all other socially responsible institutions, companies, and individuals for helping the kids raise awareness about topics pertaining to Life on Land, such as biodiversity, plastic pollution, and deforestation.