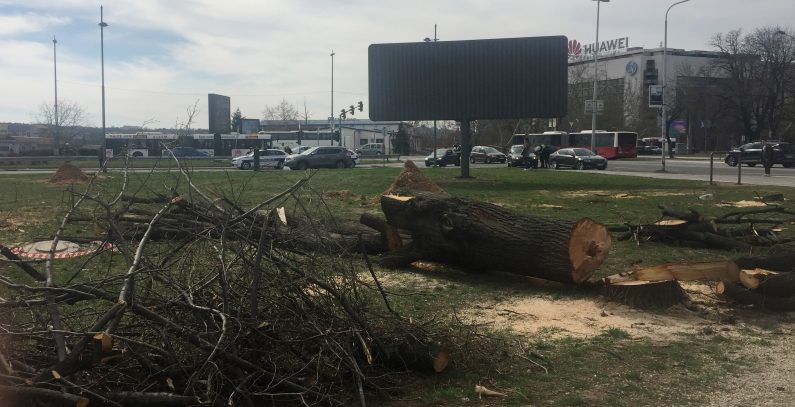 Belgrade, which plans to compete for the European Green Capital Award, has sparked uproar from experts and the broader public over the felling of 150 trees, which was not preceded by a public consultation. The trees are being felled over a EUR 15 million project to build a gondola lift to bridge the Sava River from the Kalemegdan Fortress to the Ušće park.

While the true green cities of Europe such as Ljubljana and Copenhagen are planting little urban forests, Belgrade’s greenery is playing second fiddle to infrastructural projects, many of which, including the gondola lift, can hardly be considered priorities amid severe air pollution in the city of two million, which releases wastewater into international rivers without any treatment and dumps municipal waste without any sorting into the Vinča landfill, Serbia’s biggest environmental problem.

Mirko Popović of the Renewables and Environmental Regulatory Institute (RERI) sees several problems in tree felling in the Ušće park in New Belgrade. One of them concerns the environmental impact assessment procedure, which he believes has been sidestepped.

According to Popović, what is interesting is that public ski run operator Skijališta Srbije, the investor in the gondola lift project, has not made the requested documentation – including the location permit and conditions from the Institute for Nature Conservation – available for public consultation.

The decision passed by the Ministry of Environmental Protection shows that the documents were subsequently delivered, which is not uncustomary, Popović says, noting, however, that the problem is in that the public, which has the right to take part in all stages of an impact assessment procedure, had no opportunity to see the documentation.

“This has undermined the environmental impact assessment procedure. Citizens, who may be interested – and let’s assume they are interested since the park is a public, not private area – couldn’t have a complete insight into the documentation based on which the decision on assessment was passed,” says Popović.

Work on environmental impact assessment study yet to begin

Popović recalled that air pollution in the Serbian capital was extremely high a while ago and that it is the city’s major problem, noting that the idea to cut down 150 trees should be viewed in that context. He says that such an activity can be described as permissible if experts say it is not harmful, if all procedures of state, city, and municipal bodies are observed, and if adequate compensation is paid before the final decision is adopted.

“In this case, it seems to me that everything that’s done on the state and the City of Belgrade administrative level is done to create conditions for the project to be carried out at any cost. It’s as if limitations are observed through bureaucratic lenses, not as measures that should enable environmental protection,” says Popović.

Social media networks have been alight these days over the information that public landscaping utility Gradsko Zelenilo employed the topping method to prune trees along the several-kilometer-long route from Dušanova Street to Ruzveltova Street ahead of its reconstruction.

Tree topping is the practice of removing whole tops of trees, which is seen as damaging for trees.

It was nearly a decade ago that inappropriate tree pruning done in the past was blamed for the poor shape of plane trees cut down along Kralja Aleksandra Boulevard ahead of its reconstruction in 2010.

The question remains how many times history will repeat itself in Belgrade.