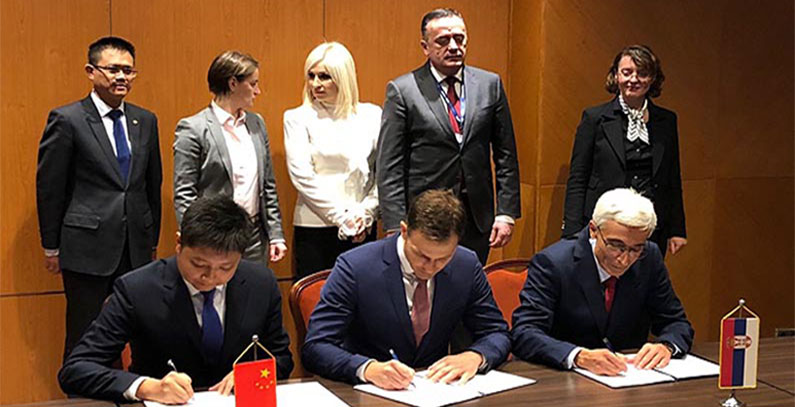 Belgrade Mayor Siniša Mali signed contracts with two Chinese companies to build a heating pipeline from Obrenovac to Novi Beograd and a wastewater processing plant. The contracts with the CMEC (China Machinery Engineering Corporation) and Power Construction Corporation of China were signed during the 16+1 (China and 16 countries of central and eastern Europe) 2017 summit of heads of government in Budapest.

CMEC company representative for central and eastern Europe Lee Siuchang signed the contract to build a facility for the processing and containment of waste water from central parts of the city while Yang Fen of the Power Construction Corporation of China signed the contract to build a hot water pipeline running from the Nikola Tesla thermal power plant (TENT) in Obrenovac to New Belgrade. That second contract was co-signed by the CEO of the JKP Beogradske elektrane (the Belgrade city central heating company) Goran Aleksić.

Mayor Mali said after the contracts were signed that the city authorities planned those two projects decades ago but never got to the point of implementing them. “Waste water is now drained into the Sava and Danube rivers which is completely unacceptable and we are virtually the only city which does not have a plant to process waste water.

Thanks to this contract, the construction of that facility will begin in the second half of next year. This contract includes the completing of the construction of an interceptor and that is something that has been discussed since 1980. The total value of the project stands at EUR 260 million,” the Belgrade Mayor said.

Mali said that the construction of the heating pipeline from the Nikola Tesla power plant will mean huge savings for the Beogradske elektrane company because the hot water produced by the TENT will no longer go to waste but will be used for heating. “That will mean savings of EUR 40 million a year and the project will pay for itself within five year. We also expect work on this project to start in the second half of 2018. This project is valued at EUR 190 million,” he said.

The signing of the two contracts with the Chinese companies was attended by Serbian Prime Minister Ana Brnabić, Minister of Construction, Traffic and Infrastructure Zorana Mihajlović and Minister of Mining and Energy Aleksandar Antić.