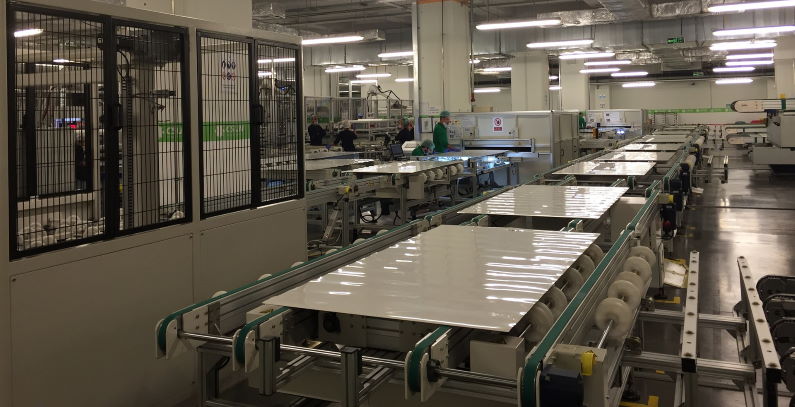 Kalyon and China’s CETC built a manufacturing complex in Ankara for all components for solar power panels. The factory worth USD 400 million will supply the products to the company’s 1 GW photovoltaic project in Karapınar in central Turkey. Total investment is planned to reach USD 1.4 billion.

Production officially started at Kalyon Group’s facility for ingots, wafers, modules and photovoltaic cells in the Başkent Organized Industrial Zone in Ankara. State officials said it is the first integrated solar panel factory in Europe and the Middle East and that it will enable Turkey to avoid almost USD 100 million in imports per year.

Furthermore, Kalyon Holding’s Board Chairman Cemal Kalyoncu said, together with the company’s planned 1 GW solar park in Karapınar in Konya province, the solar cell manufacturing unit would contribute USD 400 million per year to the national economy. It invested USD 400 million in the factory and earmarked USD 1 billion for the photovoltaic system in central Turkey.

The share of domestic content in the production will top 70%, according to Kalyoncu, who added Kalyon would also use the electricity from the solar power plant as it gradually expands.

President Recep Tayyip Erdoğan noted the inaugurated factory spans ten hectares and that it would employ 1,400 people. He stressed the annual capacity of solar power output would reach 500 MW. In Kalyoncu’s words, output will be doubled soon after that. Kalyon has the ambition to ship its products abroad.

Minister of Finance and Treasury Berat Albayrak said Turkey is ending its energy dependency step by step with clean technology. Electricity production from domestic and renewable sources touched 90% on May 24, he underscored and hinted at efforts to develop energy storage infrastructure and solutions like batteries.

The research and development section will have one hundred engineers and it is already working on 15 projects including panel efficiency, lighting and irrigation, the company revealed. It said it would invest USD 80 million in R&D in the next decade.

Renewables make up over half of country’s power capacity

Minister of Energy and Natural Resources Fatih Dönmez stated Turkey’s renewable energy capacity climbed to 50.3% of the total last month and that solar power expanded to 6.23 GW, pointing out how in 2013 its share was still negligible.

The giant photovoltaic plant in Konya is projected to generate 2.6 TWh per annum. The minister said the facility would add 40 MW every month and that it is planned to be finished in 33 months, taking up 2,000 hectares.

Kalyon won at a tender within the Renewable Energy Resources Area (YEKA) support scheme in March 2017 with Hanwha from South Korea. It offered USD 69.9 per MWh. The government subsequently granted an incentives package.

The partner later abandoned the project and China Electronics Technology Group Corporation (CETC) was hired as a contractor and for two years of assistance after the solar cell factory is complete.

Turkey also has the Renewable Energy Support Scheme (Yekdem), through which it grants feed-in tariffs. Operators of geothermal units get USD 105 per MWh compared to USD 73 for wind and solar power and USD 133 per MWh for electricity from biomass facilities. The rates are higher if companies use domestic equipment.

The state paid a total USD 557.1 million in July to 817 power plants with an overall capacity of just over 21 GW, for the production of 6.3 TWh, according to official data reported by Anadolu.