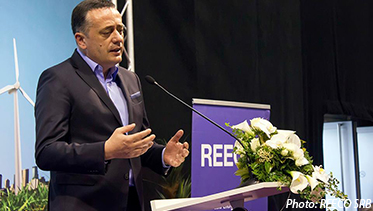 Serbia will start building plants for 480 MW of wind power by the end of the year and connect them to the grid by the beginning of 2019, energy minister Aleksandar Antić stated at the opening ceremony of RENEXPO Western Balkans on April 20. The country has adjusted its laws and regulations for investing in renewable sources, and as a result in very short time got 63 MW of green energy, mostly from small hydropower plants and solar plants, while 10 MW is from wind, he stressed.

He reminded visitors and exhibitors at the two-day event of Serbia’s goal to increase the share of renewable energy sources in final consumption from 21%, registered in 2009, to 27% by 2020. Biomass has the biggest share in country’s renewable energy sources, estimated at 3.3 million tonnes of oil equivalent per year, he added. He also said the government promotes energy efficiency and plans to save up to 9% of energy in public buildings.

Axel Dittmann, ambassador of Germany, said everyone feels the consequences of climate change and that all people have to act together on international level because climate change does not stop at the national borders. He stressed his country set ambitious goals for reducing greenhouse gas emissions and intensively contributed together with the European Union to it, but that more steps are needed to combat climate change. Dittmann said energy transition demands investments, and reminded that Serbia’s efforts to increase its energy efficiency are supported through GIZ and KfW, German development agencies, cooperating with Serbian partners in order to reduce energy consumption in public buildings and provide loans for small and medium-size enterprises to purchase energy efficient equipment.

Last year RENEXPO facilitated 40 joint business bilateral tables between enterprises and investors for a total of about 200 B2B meetings.

Annual production of communal waste in Serbia is 2.4 million tonnes, reduced due to the economic crisis in the country in the past few years, stated Miroslav Premović, chief executive of Djubretarac.rs, first Serbian waste management web portal and consultancy company. He said 70% of communal waste is generated by citizens while the rest is from industry and other companies. More than 50% of waste is organic, which is unfavourable, as the recycling material has lower value, he explained. Premović stressed organized collecting of communal waste in Serbia was increased to 70%, mostly in urban areas, but that 30% of waste still ends up on more than three thousand illegal landfills.

In the National Waste Management Strategy of Serbia, the establishment of 26 regions is planned. The activity is mostly given to state-owned companies that are not efficient enough, he added. Serbia now has nine regional centers for waste management and in five it is a public–private partnership (PPP), Premović said.

Last year in March, the Belgrade Chamber of Commerce formed a Group for waste management and recycling. Representatives of more than 60 companies from that sector participate in meetings, said Maja Dragutinović from the chamber. The group is giving recommendations and initiatives, proposing laws and organizing meetings for domestic companies with potential partners and investors.

In Belgrade, everything is regulated by the local plan for waste management from 2010 to 2020, stated Jelena Plavanski from the Belgrade Chamber of Commerce. The first bigger project was the tender for Belgrade’s Vinča landfill, with 11 companies, and five are shortlisted. Final results are expected after the first half of the year, Plavanski said. For this year, opening of three recycling centers is planned, and in the next three years a total of 15 facilities.

Predrag Milanović, advisor in the Ministry of Mining and Energy, presented legal framework which should promote renewable sources of energy in Serbia. Milanović stressed the new directive on feed-in tariffs is already prepared and that it will not change incentives significantly. He also said the new energy law brings new advantages for producers and investors.

Maryam Rabla, engineer at Andritz Hydro from France, showed participants how the company projects solutions for small hydropower plants on an example from her country. It was a greenfield investment worth EUR 980,000 and with an annual revenue of EUR 101,000, so the return on investment was 9.7 years, she said.