Photo: Construction site of the SHPP Zvonce in the Rakita village (Defend the Rivers of Mt. Stara Planina) 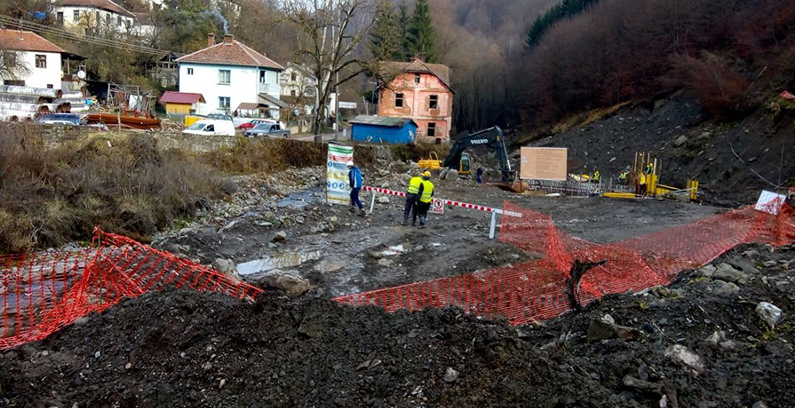 It’s not just a common illegal facility, but a small hydropower plant (SHPP) that will deprive the Rakita village residents of water, which to them is a matter of life and death. This is neither a whim nor politics, and that’s perfectly clear to everyone, says Aleksandar Jovanović Ćuta, one of the founders of a movement called Defend the Rivers of Mt. Stara Planina (ORSP).

The movement has called on all free people to take part in the removal of pipes from the Rakitska river bed on Saturday and in that way do something that has been the state’s duty for over a year and a half under a decision of the Ministry of Environmental Protection.

The ministry’s decision from January 2019 banned Goran Belić, the investor in SHPP Zvonce, from performing any works in the village of Rakita and ordered him to restore the location to the original state – which means to remove 300-350 meters of pipes from the riverbed because the works had been carried out in violation of the conditions issued by the Institute for Nature Conservation of Serbia in September 2018.

Inspectors have also determined that a landslide has been activated at the water intake level on the right bank of the river, and that the flora on the left bank has been destroyed. The investor’s appeal against the ministry’s decision could not have delayed its execution, but on top of that, the appeal was rejected in April 2019, according to RERI.

The investor not only failed to remove the pipes, but he also continued with construction works and obtained a use permit

However, not only did the investor fail to comply with the decision, but he also continued with construction works, and the SHPP has recently even obtained a use permit from the Babušnica municipality.

Aleksandar Jovanović Ćuta has told Balkan Green Energy News that “public works” to carry out the ministry decision will take place on Saturday.

“The pipes, whose purpose is to divert water from the Rakitska river to the power plant, have been laid in a floodplain, which is prohibited by the Water Law. If this prohibition were to be observed, all 120 SHPPs in Serbia should be demolished because they all have pipes in floodplains,” he says.

The Water Law prohibits placing SHPP pipes in floodplains, which is not the case with Rakita only, but also with other SHPPs

Unfortunately, he says, it will not be possible to remove all 300-350 meters of pipes, as that would require an excavator, and there is no business or individual who would dare do that, because people are afraid.

“However, we are going to remove parts of those pipes with a grinder, pickaxes, and shovels, and thus demonstrate that we are carrying out the ministry’s decision,” he added.

Police will record the removal of the pipes

The police in the city of Pirot have said they will record and take photos of participants in the event, citing a risk that the activity could cause danger to life, health, or property.

Jovanović says that he has no information that police will stop the removal of the pipes.

The pipes will be removed by people who have no political agenda, and who have been asking only for the law to be enforced for two years now

However, according to him, the police have a problem too, because they have estimated that the gathering will be large

“This will be a gathering of people who have no political agenda, and who have been asking only for the law to be enforced for two years now, because there are multiple decisions banning the works, not just the one issued by the Ministry of Environmental Protection,” says Jovanović.

For example, building inspectors from the Babušnica municipality adopted a decision in late 2018 to suspend the works due to, among other things, corroded pipes and failure to perform a geodetic survey of the terrain, according to a report by Južne vesti.

The investor has punched through two flood barriers, which serve for protection against erosion and torrential floods, so that run-of-river pipelines can go through

Among a multitude of irregularities surrounding the construction of SHPP Zvonce, one is particularly striking – the fact that the investor has punched through two flood barriers, which serve for protection against erosion and torrential floods, so that run-of-river pipelines can go through them, as Ratko Ristić, Dean of the University of Belgrade Faculty of Forestry, said in an earlier interview with Balkan Green Energy News.

He pointed to yet another irregularity – the fact that the building permit was issued in late 2017, while the geotechnical study, a prerequisite for obtaining the permit, is from 2018.

What is the construction ministry waiting for?

Jovanović says that it is not clear why the Ministry of Construction, Transportation, and Infrastructure, which is headed by Zorana Mihajlović, has not yet passed a decision on revoking SHPP Zvonce’s building permit, in a procedure that was initiated in late 2019.

He says he has been told unofficially that a decision on revoking the permit has already been penned, but that, officially, everything is still on hold.

The government will have to deal with Serbia’s first environmental refugees, and they will come from the Rakita village

“If they intend to beat us up on Saturday for implementing the law, and they have allowed the investors to break the law, then that would be on them. We are going to do it, and if they stop us anyway, they will have to deal with environmental refugees, residents of the Rakita village, who will come to the government building, and then let the government find them a place to live and a place where they will have water,” says Jovanović.

The Ministry of Construction, Transportation, and Infrastructure has recently said that it is still waiting for an amendment to the position of the Institute for Nature Conservation of Serbia on the decision it has issued regarding SHPP Zvonce, after which the ministry will decide whether to revoke the building permit or not.