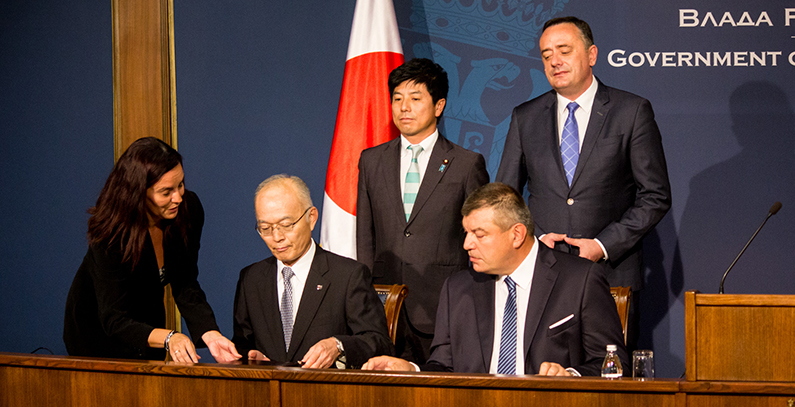 Mitsubishi Hitachi Power Systems, Ltd. (MHPS) will install flue gas desulfurization (FGD) systems in the Nikola Tesla A coal-fired power plant (TENT A) in Serbia. The project worth EUR 167 million will help reduce sulfur dioxide (SO2) and particulates emissions, and enable Serbia to meet EU environmental standards. This is the first time MHPS has received an order for FGD systems from Serbia, and the second one in the Western Balkans.

The agreement on the construction of the desulfurization plant was signed between Serbian electric power company, Elektroprivreda Srbije (EPS), and MHPS on September 9 in Belgrade. The deal was signed by EPS Director Milorad Grčić and MHPS Senior Executive Vice President Yasuo Fujitani.

The project is worth EUR 167 million and it will be financed by the Japanese Official Development Assistant (ODA) organized by the Japan International Cooperation Agency (JICA).

The deadline for completing the construction is 42 months after the agreement enters into the force. MHPS announced that the systems are scheduled to begin operations in the first half of 2021.

For this project, MHPS will serve as leader of a consortium together with Itochu Corporation and MPP  Jedinstvo a.d. (JDS), a Serbian construction firm.

MHPS, supported by its European subsidiary based in Duisburg, Germany, will be responsible for project management, design, supplying main systems and dispatching technical advisors for installation. Itochu will mainly handle commercial issues. JDS will act as local partner for construction management and civil engineering, including design, installation and local procurement.

The Nikola Tesla A power plant is operated by EPS and consists of six units with a total generating capacity of 1,720 megawatts (MW). It is located some 40 kilometers southwest of Belgrade and is Serbia’s largest power plant.

The newly ordered two sets of FGD systems whose flue gas desulfurization capacity is 650 MW each are to be installed in units 3 through 6, which have a total output of 1,300 MW.

The wet flue gas desulfurization technology will be applied, using limestone as a reagent. It will generate as a by-product gypsum which can be used in construction and building of the roads.

This is the first order for MHPS’s FGD systems from Serbia, and the second one for coal-fired power plants in the Western Balkans region, following the order for similar systems for the Ugljevik Power Plant, which is presently under construction, in Bosnia and Herzegovina.

EPS has also recently introduced systems for flue gas desulfurization of blocks B1 and b2 in the thermal power plant Kostolac B. The project worth  USD 130.5 million project was implemented by the Chinese company CMEC.

SO2 emissions to be reduced 9 times

Serbian Energy Minister Aleksandar Antić, who attended the signing ceremony, said that thanks to this project, SO2 emissions would be reduced nine times, from about 74,000 tons to 7,800 tons per year.

MHPS said that the installation of the FDG system will allow to reduce SO2 emissions below the 200mg/Nm³ level envisaged by the Industrial Emissions Directive (IED).

Considering that its energy sector relies on thermal power plants and coal, Serbia will have to constantly modernize its systems and align them with the highest standards in the field of environmental protection. Those obligations arise from its membership in the Energy Community, but also from its National Emission Reduction Plan, Antić said.

He said that in the coming period Serbia plans to upgrade the main thermal blocks which will be operational after 2023. As the three key issues, he highlighted the particle pollution, desulfurization and the of denitrification.

“So far, Serbia has invested around EUR 200 million in projects aimed at emission reduction and environment protection, but the main work is still ahead of us. In the period 2017- 2025, we will have to invest about EUR 900 million in order to solve the remaining issues in the field of environment, among which desulfurization and denitrification are crucial,” Antić said.

The environmentalist have repeatedly called Western Balkans countries to reduce their dependence on the coal.