Photo: Ešef Husić, the Ministry of Sustainable Development and Tourism of Montenegro 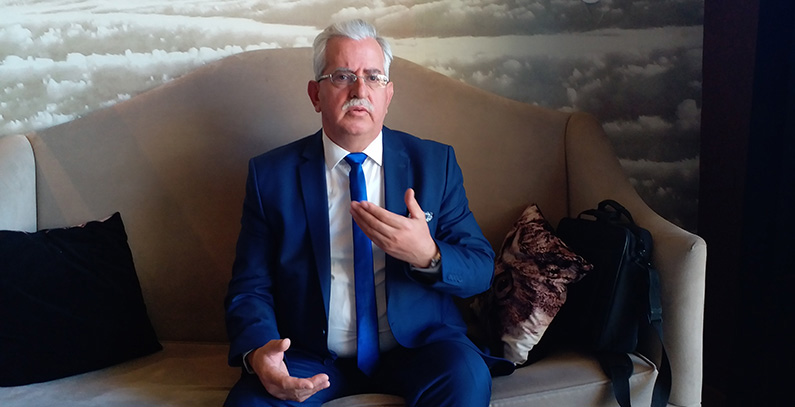 With the adoption of the climate change law and the introduction of an emissions trading system, Montenegro solidified its position as the region’s leader in energy transition. It seems the political elite and experts have no doubts on which way to go, which is best seen in the words of Ešef Husić, Director General of the Directorate for Climate Change and Mediterranean Affairs in the Ministry of Sustainable Development and Tourism, who says it is better to adapt to the times than let them pass you by.

We spoke to mister Husić in Jahorina, where he participated in a regional workshop organized within the Renewable Energy Policy Consensus – REPCONS project. The project covers the energy transition in Bosnia and Herzegovina, Montenegro and Serbia and it gathers the leading experts in the energy sector.

Montenegro was the first in the region to pass a climate change law. What do you expect from the piece of legislation?

The idea behind the Law on Protection from the Negative Impact of Climate Change is to establish a mechanism for limiting greenhouse gas emissions in line with Montenegro’s international obligations related to the Paris Agreement, as a condition for our state to lower the emissions by 2030 and contribute to the weakening of the global increase in temperature to 1.5 degrees Celsius or a maximum of two degrees.

Another obligation is to launch a monitoring, reporting and verification (MRV) system so that we credibly meet the obligation to report on greenhouse gas emissions to the Secretariat of the United Nations Framework Convention on Climate Change.

The law stipulates the production of a long-term low carbon development strategy and reaching zero greenhouse gas emissions by 2050.

Montenegro was the first to adopt it in the region and even before some EU members.

The law also better regulates the issue of the use of substances that damage the ozone layer and of fluorinated gases. It is very important to stress that the rule stipulates the production of a long-term low carbon development strategy and reaching zero greenhouse gas emissions by 2050.

Was there resistance from companies considering that the introduction of the system also means additional costs for them?

After the law was passed, a decree was issued on activities producing greenhouse gases. With the decree we introduced a national emissions trading system, which covers the steel mill in Nikšić, the Pljevlja coal mine and aluminum manufacturer Kombinat aluminijuma Podgorica.

We don’t expect resistance, but it is simply not a matter anymore of whether anyone accepts it voluntarily, if they react or may not support this, because it is something that is dictated by our time and a matter of obligation and it is the direction that must be taken.

The state must close chapter 27 and it must lower emissions and fulfil its international obligation to be able to, and the decrease in emissions before 2030 must be 30% from the 1990 level.

Those who start lowering emissions sooner will profit because this national ETS system was started precisely for economic motivation, which will eventually enable sustainable production, which must follow the EU’s demanding and strict standards. It is how we adapt to what awaits us tomorrow, as we are all directed toward the EU. There is no alternative to that road.

There are transitional periods for introducing the ETS system?

There are free units for emissions and there are those that will be traded. The adjustment period will be five years as we calculated that, with the current mechanism of the European Environmental Agency, which tracks the functioning of EU ETS, we won’t be able to join it before 2025 whether we are EU members or not.

We won’t be able to join EU ETS before 2025 whether we are EU members or not.

The system gradually limits emissions over five years by lowering the amount of free emissions, with which emissions trading is stimulated by having to pay more if you emit more.

The operators have the possibility to choose the starting level for their emissions from the report for 2013-2015 or 2015-2017. And subsequently, it decreases through 2030, but until 2025 they get around two-thirds of emissions units for free and pay for the rest. After that the free share will be lowered.

Even when adopted regulations are like the ones in the EU, the countries of the region have a problem in implementing them or credibly determine the effects. The problem is also solved with the new law?

That’s right. You can declare that you lowered emissions by this much or that much but, according to the law that we passed, it will have to be credibly proven by hiring an institution that is licensed by the European Environmental Agency.

The institution will verify data prepared by some national institution of ours. No operator will be able to easily handle the figures and the decrease in emissions, as everything will be checked just like it was a state in the EU.

You recently stated abundant rain, strong winds, higher average temperatures, fires are something that Montenegro would suffer in the future. Are citizens, but also decision makers, aware that we already feel the consequences of climate change?

Montenegro and the countries of our region belong to Southeastern Europe, a region that is by all indicators hit the most by climate change. It is not just the rise in the median annual temperatures, but extreme droughts as well and uneven precipitation, forests drying out, land desertification, the impact of elevated temperature on human health, biodiversity, agriculture…

The Western Balkans are small by emissions of harmful gases, but we feel the consequences of climate change, which were mostly caused by developed countries

We face serious negative effects of climate change, so we have to change the models of our behavior both individually and collectively and accept new ways of work – how we build, how we consume energy, how we do agriculture, how we organize transportation.

The Western Balkans are small by emissions of harmful gases, but we feel the consequences of climate change, which were mostly caused by industrially developed countries. There is a need for these countries to unite and make a single strategy toward financial institutions in this area. There is money, but the question is whether we can get to it.

One of the most important objectives of the REPCONS project is for expert views to be heard more in the processes of decision and policy making. How important is it?

It is extremely important. I am just afraid that expertise doesn’t reach politicians enough as they have their own story, agenda, and they care about this only when someone from another area points it out. Then we are in a situation where they tell us what we should do according to our interests. It would really need to be avoided, we really don’t need it.

Climate change shouldn’t include those arid, ugly Balkan politics. There would have to be a policy that should unite us all so that we secure quality solutions that will enable wellbeing for every citizen in the region.