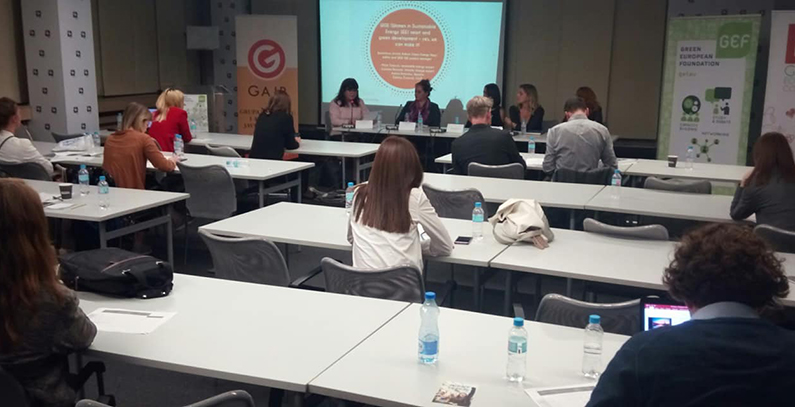 The second international Green Economy Congress titled Shaping Synergies into a Circular Society brought together leaders in the green economy, entrepreneurship, innovation, science, and environmental protection from Serbia and abroad. The first day of the congress was concluded in a panel by members of the WISE expert network who conveyed the message that green and sustainable development in Serbia is possible, but that intensive work is still needed to promote this topic and change the awareness of citizens and decision makers, as well as the entire system.

The conference was opened by Žaklina Živković, vice president of the Group for Analysis and Policy Making (GAJP). During the first day, Grigoris Chaziksotas of BioSense Institute gave a lecture on innovation in the circular economy, while Anna Larsson of ReLoop Europe,  addressed the EU Circular Economy Package.

Participants in the first panel, titled Public Policies for Circular Evolution: Role of Policy-Makers, were Slobodan Perović of the Ministry of Environmental Protection, Antoine Avignon of the EU Delegation to Serbia, Jeoren Jansen, from the city of Nijmegen, which is the European Green Capital for 2018, and Dušan Vasiljević, an environmental protection expert.

The second panel was about green policies at the local level and urban development, while at the third panel, titled  Wise, Smart and Green Development of Serbia – Yes, We Can Make It!, members of the WISE SEE Network (Women in Sustainable Energy of South-East Europe) spoke about Serbia’s energy strategy, climate change, energy efficiency, and the green economy.

Panel moderator Branislava Jovičić, editor of Balkan Green Energy News and project manager of the WISE SEE initiative, recalled that the first database of women engaged in sustainable energy, climate change, and environmental protection in SEE has been established as a result of the pilot project in Serbia. She said also that the results of research on the role, position, representation, and attitudes of women engaged in sustainable energy have been published in the first study of this kind in the region.

Asked what should be done to increase the share of renewables in Serbia, Maja Turković, a renewables expert, said that energy transition implies a decarbonization not only of the energy sector, but also of people’s lifestyle, noting that renewables present themselves as a solution.

The energy and transport sectors are the top sources of emissions, and the power sector is seen as a huge challenge for countries such as Serbia, which lean on lignite.

“Renewables are still perceived as extremely costly and to some extent unnecessary for the country that is not contributing that much to the global emissions. But when we look at the amount of the emissions of our power sector and the raising of the CO2 price in the EU, which is now EUR 28, there is a cost of around EUR 1 billion annually, which can burden our economy and lower our competitiveness,” Turković said.

Many of us connect energy transition with the high cost, and it does come with a high cost, she said.

“But, if you want to have clean air, to have a sustainable power sector, and to decarbonize the economy, it has to come with a cost. However, in the long-term, it pays off. The whole concept of sustainability is that we don’t leave bills to our generation, which is exactly what we are doing right now,” she said.

Asked what the Serbian energy strategy would look like if she were in charge of it, Turković said that the number one priority would be energy efficiency to secure all possible savings, alongside reducing coal-fired capacities and developing renewable energy sources, which are now becoming price-competitive.

“If Serbia fails to tap into the potential of renewable energy sources, it will become an importer of electricity, and that must be emphasized,” she said.

Not all renewable energy sources are sustainable

Panelists agreed that not all renewable energy sources are sustainable, noting that the intensive construction of small hydroelectric power plants (SHPPs) is unsustainable for several reasons – the contribution in the overall electricity generation is small and the fact that they are being built in protected areas is in contravention of the current regulations. Also, the participants agreed that planning of hydropower exploitation must take into account the impact of climate change on water courses.

“The development of renewable energy sources requires a nexus approach, which will consider existing potentials, the impact of built capacities on the environment, and other sectors, but we should also not forget the impact on the local population,” Jovičić said, noting that UNECE last year produced an excellent study of the Drina River Basin, which can serve as a good example of sustainable development based on the nexus approach.

Decarbonization is not only a matter of ecology but also economy

Danijela Božanić, a climate change expert, said that a majority of the international community believes that climate change is real and caused by man, but that there are various lobbies that try to put some other things on the agenda.

“In the end, we end up discussing whether climate change is real or not instead of acting,” she said, adding that decarbonization is not only an issue of ecology, but also the economy – a question of whether you will be able to sell something if you do not adhere to certain standards.

As a challenge to sustainable development in Serbia, she suggested the necessity of understanding that energy efficiency is a great potential for reducing emissions and that climate change is something not to be tackled only by the ministry in charge of environmental protection, but that it is necessary to establish multisectoral cooperation.

System offers no reward, but also no punishment

Speaking on the potential of energy efficiency in Serbia, Ankica Barbulov, managing director of Resalta in Serbia, said that in recent years she has often publicly talked about problems, but that she has decided to discuss the roots of these problems in the future.

“Throughout the last four years, we have been trying to explain why energy efficiency is important and what the benefits are of improving it: it is not only a positive environmental impact, but also a concrete economic benefit, because with the ESCO model, for example, we invest and the customer enjoys saving money and energy, while reducing emissions. Things, however, did not develop with the expected dynamics. The roots of this are both individual and systemic,” Barbulov noted.

Individual reasons include a lack of knowledge, which is the reason why citizens cannot understand why for example it is a big mistake to take three plastic bags in a shop instead of none. Another big problem is the lack of responsibility for doing or not doing something.

Individual reasons are also transferred to the system because the system is made by the same people, and in addition, the system does not offer a reward if you do something for sustainable development or punishment if you do not, Barbulov said.

We do not fight for our ideals

Žaklina Živković, vice president of the Group for Analyzing and Creating Public Policy, said that the story of sustainable development always ends with a lack of money.

The solution is a green economy, which requires not only an environmental approach, but a holistic one that also takes care of social aspects, she said.

Živković seeks to explain to people that they can have a business that is in line with environmental principles, but also creates new jobs and profit.

She noted that people in Serbia have knowledge, but that the system does not provide support, while she also noted that she sees a lack of confidence in own capabilities as something that should be worked on.

“We do not fight for our ideals. The other side is much louder, although it often has no arguments to support its claims,” she said, adding that the fact that the Congress lasted for two days last year and three days this year shows that this topic is getting more and more important, and that people from Serbia have something to offer.