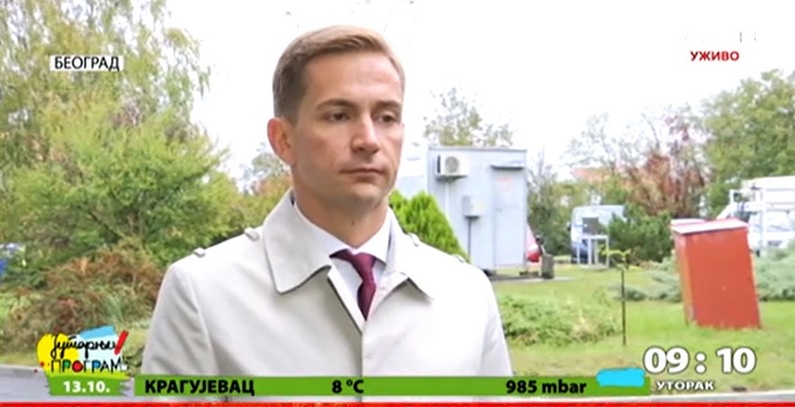 Last Saturday, AirVisual ranked Belgrade 10th in the world by air pollution, while the following day the Serbian capital was the fifth most polluted city. Filip Radović, director of the Serbian Environmental Protection Agency, has told RTS that air pollution was indeed increased, but he noted that AirVisual is also in the business of selling equipment for air quality monitoring and therefore has an interest to keep this issue in the spotlight.

This year, according to RTS, Belgrade entered a group of the world’s most polluted cities at the end of October, while in 2019 it made it to the list somewhat earlier. Thanks to wind and rain, the situation in the capital has improved following this past weekend, but the main sources of pollution are still there.

Filip Radović has told RTS that AirVisual is an international website which is also in the business of selling equipment for air quality monitoring, and is therefore in its interest to keep the topic of air quality in the spotlight.

He also noted that AirVisual uses local data for Serbia, and that it is therefore not possible for the website to show different results from those reported by the authorities.

Radović stressed that AirVisual shows hourly values, and that measuring devices are very sensitive. To illustrate the sensitivity of these devices, Radović said that the Agency has on several occasions observed dramatic spikes in emissions even, for example, when a truck is parked nearby, adding that when something like that happens Serbia jumps to a much worse place in the AirVisual rankings.

However, a true assessment of air quality is obtained on an annual level, and it is on this very website that Belgrade ranks far below the 20th place. “Certainly, we do not want to compete to show how bad we are, but how good we are. If you took a newspaper from the mid-20th century, you would see that even then our citizens dealt with air pollution, but that there were no changes,” he noted.

Today, according to him, Serbia invests systemically in resolving the problem of air pollution, and there is even a working group on the issue, headed by Prime Minister Ana Brnabić. Also, economic growth has led to increased traffic and more construction activity, which affects air quality, Radović explained.

There is also far more investment in reducing air pollution, he said. The biggest polluters today, such as state power utility Elektroprivreda Srbije, are investing hundreds of millions of euros into projects aimed at reducing emissions. Radović recalled that the Government of Serbia has allocated funding for the first time to subsidize the purchase of electric and hybrid vehicles.

The very fact that this issue is being discussed so often, instead of being swept under the rug, demonstrates that Serbia has changed, and that it wants to deal with air pollution. The only difference between now and then is in that today the measuring is adequate, and the data is available to all via web services and mobile phone applications. This allows citizens to follow the quality of the air, and that is the foundation for everything, according to Radović.

The problem did not arise yesterday, but rather in the middle of the 20th century, and it cannot be solved so quickly

He agreed with the RTS reporter that air pollution was increased over the weekend, and he explained that the heating season had begun and that nitrogen concentrations in the air were higher as well due to heavier traffic.

These are the problems Serbia will be facing this winter, he said. The problem did not arise yesterday, but rather in the middle of the 20th century, and it cannot be solved so quickly. The authorities will allocate time as well as significant resources to prevent air pollution. “That will not happen today, or tomorrow, but if we continue to talk about it, and if the government continues to invest in it, I am certain that air quality will get better and better in the time to come,” he said.