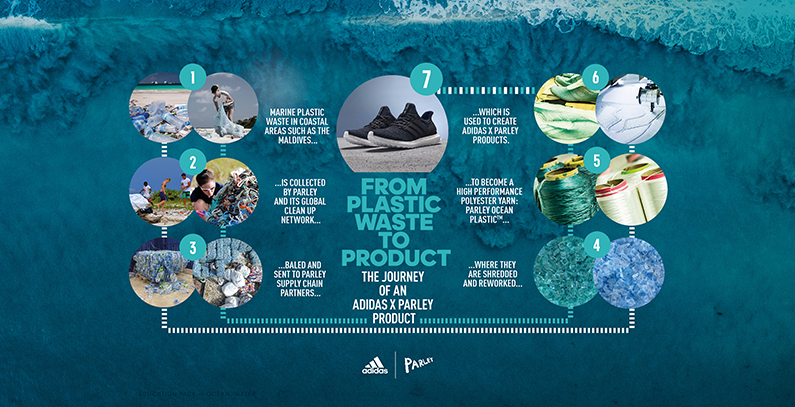 The production of shoes whose upper material is made of upcycled plastic waste turned into a yarn is a result of the company’s cooperation with the environmental organization and global collaboration network Parley for the Oceans.

As part of this cooperation, plastic waste is intercepted on beaches, such as the Maldives, before it can reach the oceans, the company explained in a press release.

Besides footwear, Adidas also produces apparel from recycled material, such as the Champions League jersey for FC Bayern Munich and Alexander Zverev’s outfit for the Australian Open.

“With Adidas products made from recycled plastic, we offer our consumers real added value beyond the look, functionality and quality of the product, because every shoe is a small contribution to the preservation of our oceans,” it said.

The company recalled that it is also committed to using only recycled polyester in every product and on every application where a solution exists by 2024, and that Adidas stores stopped using plastic bags in 2016.

Plastics accounts for 90% of floating marine debris, according to earlier reports. A 2015 McKinsey report estimates there are over 150 million tons of plastic in the seas, coming from collected plastic waste subsequently leaking into the oceans.

The 2016 Ellen MacArthur Foundation report estimates that without significant action, there may be more plastic than fish (by weight) in oceans by 2050.

To tackle this type of pollution, the EU plans to ban single-use plastics, such as plates, cutlery, straws, balloon sticks or cotton buds from 2021.

Under draft plans approved by the European Parliament (EP) last October, the consumption of several other items, for which no alternative exists, including single-use burger boxes, sandwich boxes or containers for fruits, vegetables, desserts or ice creams, will have to be reduced by EU member states by least 25% by 2025.

According to the European Commission, more than 80% of marine litter is plastics and 70% consists of items covered by measures backed by the EP. Plastic residue is found in marine species – such as sea turtles, seals, whales and birds, but also in fish and shellfish, and therefore in the human food chain.