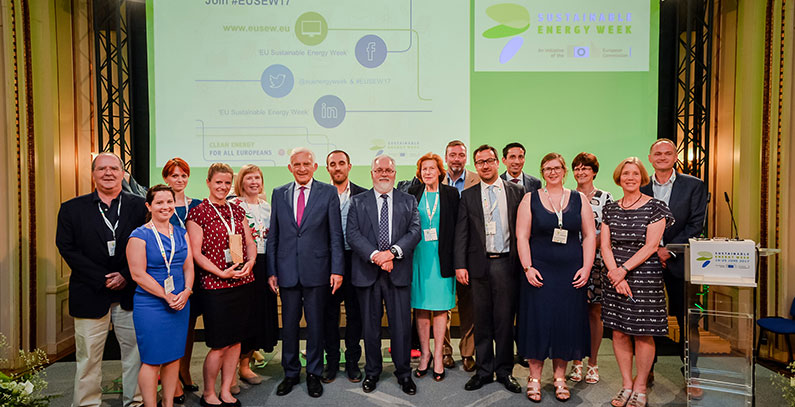 The winners of the EU Sustainable Energy Week (EUSEW) Awards 2017 for innovative energy projects were revealed yesterday at the Awards ceremony in Brussels. This year twelve projects were shortlisted in four categories, with the Energy Islands Award being introduced for the first time. The Greek Tilos project was double winner this year.

The ceremony was a fitting end to the first day of 2017 EUSEW Policy Conference, celebrating innovations that could help all Europeans access clean energy.  EU Commissioner for Energy and Climate Action Miguel Arias Cañete, energy and consumer experts were on hand to congratulate the winning projects.

To open the evening, textile and fashion innovator Marina Toeters presented some of her latest high-tech creations, which could support the shift to sustainable energy. Short films then introduced the three finalists in each category – Consumers, Public Sector, Business and Energy Islands – before the winners were announced.

The first ever winner of the Energy Islands Award was the Greek Tilos project, for its contribution to the island’s energy security through its ground-breaking battery-based hybrid power station.

The project was also the winner of the Citizens’ Award, chosen from the 12 finalists in an online poll with over 10 000 votes.The Citizens’ Award reached new heights of popular success, with 22 000 votes cast online by members of the public, over twice last year’s total.

The Consumers award went to the Home Energy Saving Kit, from Ireland. Available through Dublin’s public libraries, it provides householders with accessible tools to make energy savings in their home.

The Public Sector Award was awarded to the Europe-wide CELSIUS project – which supports the spread of efficient district heating and cooling in a network of 66 municipalities, and growing.

The Business category winner was SINBIO in Slovakia, which has cut emissions and created jobs by switching the town of Trebišov to biomass power fuelled by agricultural and forestry waste.