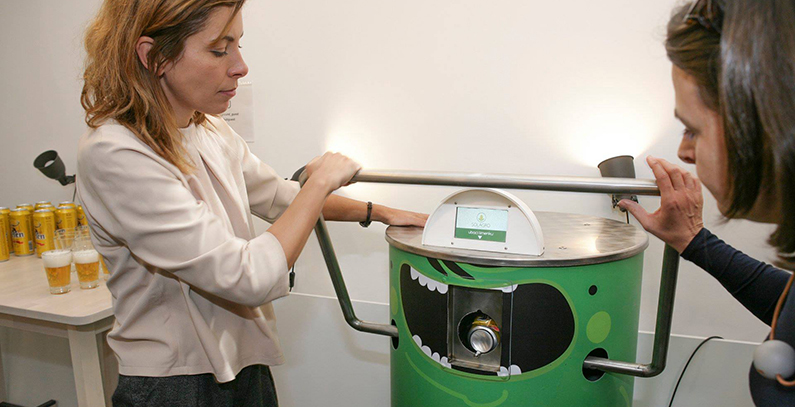 A lack of a reliable and simple recycling system and unmotivated users result in a low percentage of recycled packaging waste. Serbia’s Solagro, a participant in this year’s clim@ competition for startups organized by the Green for Growth Fund (GGF), has developed a smart beverage waste recycling device that can solve the problem.

The Solagro Smart Recycler motivates users to recycle through the process of gamification, by awarding them with valuable prizes. Users receive awards for every can or bottle they recycle through a dedicated smartphone app. Through cooperation with large beverage companies and festivals, Solagro is able to provide meaningful awards such as books, theater tickets, dinners, and even summer vacations.

In developing countries, which make up two-thirds of the world, nearly 95% of packaging waste ends up in landfills or waterways. The problem lies in either having no reliable recycling system provided or having a complex recycling system that is not focused on consumers.

This leads to consumers not being informed enough about the importance of recycling and the possibilities for recycling. Recycling posts are often non-existent or located far away from residential areas. Commonly, recycling posts are set up only for show and recycled waste is then collected together with other types of waste. This makes consumers lose faith in the recycling system and leads to even less waste being recycled.

Furthermore, in developing countries that do have a recycling system, motivation for recycling is low due to the insignificant deposit amount (usually less than a few cents), which additionally puts people off from recycling.

The Smart Recycler is a smart recycling crusher that solves this problem by introducing gamification of the recycling process and motivating users to recycle with prizes and awards. The device reduces the costs of recycling by compressing waste and reducing its volume by 90%. It has a touchscreen which displays the instructions and the number of recycled items. Through a designated Android app, the device awards its users for recycling. The new system was designed to make recycling more interesting, motivating, and fun.

The device is used in 5 simple steps:

The prizes are awarded by Solagro’s socially responsible partners and clients that are contributing to environmental protection and promoting their products or services. By working with large companies as its partners, Solagrois able to provide truly meaningful awards for users, such as books, theater tickets, dinners, and even summer vacations. This is how Solagro adds a unique human touch to the recycling process, and through the application builds a community of users that are self-conscious, informed, and spread the word about the importance of recycling.

Some of Solagro’s clients include some of the world’s largest beverage companies – Coca-Cola, Heineken, Molson Coors, Staropramen, while we have a strategic partnership with Ball Packaging, the largest global beverage can producer.

Solagro is a B2B business, where the main clients are either large companies buying the devices for their events and campaigns or cities and municipalities that aim to install an affordable, efficient, innovative, and reliable recycling system for their citizens.

The main target market for the Solagro Smart Recycling system is the Central and East European beverage waste market, with an estimated value of USD 500 million, as the recycling systems in these countries are still in their early stages, while the affordability of recycling solutions is sometimes a key decision making factor. However, over the past year, Solagro has seen a rising number of customers in Western Europe, with opportunities opening especially for large events such as festivals, where it is usually hard to recycle, all the way to becoming an auxiliary recycling system in urban environments. 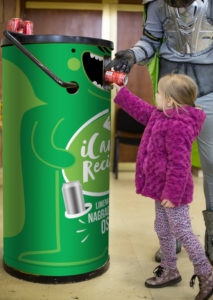 Solagro has been self-sustainable since the very foundation of the company. The company currently has a solid business model that has 4 revenue streams: Selling and renting the devices, selling advertising space both in-app and on the devices, selling data and analytics about the recycled waste, and selling the waste. The company is currently researching new business models that would provide even stronger sustainability and a rapid growth with scaling.

Implementing the Solagro Smart Recycling system would reduce the beverage waste significantly and would contribute to a greener and healthier planet. So far, Solagro is close to recycling nearly 600 tons of beverage waste that would otherwise end up in rivers or landfills.

Solagro Smart Recycling has all the preconditions to achieve its 5-year vision – tobecome a leading player on the CEE beverage waste market.

By participating in various international events, such as clim@, Solagro has significantly increased its visibility and is looking forward to new partners and business opportunities.

Solagro has received an investment from the Serbian Innovation Fund for the further development and improvements of the system. By acquiring new large clients, Solagro is growing its capacities for the development of new products and services.

Solagro’s goal is to create a future of recycling, and it is already on the right path to achieve it. 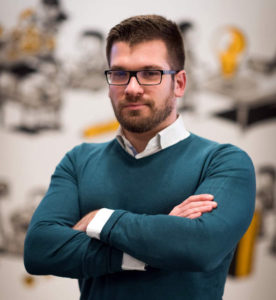 The clim@ competition and the participation at the GGF Forum has opened a whole new window of opportunity for us. Not only have we gained a lot of global attention, but we have also established valuable contacts. Apart from meeting our outstanding peers from all over the world who inspired us greatly, we’ve been introduced to the key people at the GGF and Finance in Motion who are very eager to cooperate on new projects that we have in plan. We are really looking forward to cooperating with them in the future and we are very excited for new opportunities.

Solagro Smart Recycling LLC is registered in Belgrade, Serbia and was founded 3 years ago as So

lagro Team. Solagro’s core team consists of seasoned entrepreneurs that have worked with large corporate clients for many years. Nemanja Janić and Marko Kaličanin are the co-founders, with over 5 years of experience in the recycling industry, while Đorđe Đorđević, business developer, has been engaged with corporate innovation, mostly in the telco and retail industries in the past 5 years.