Serbia to ratify Paris Agreement by middle of next year 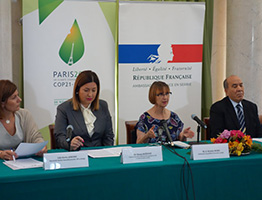 Stana Božović, state secretary in the Ministry of Agriculture and Environmental Protection, said Serbia may soon adopt a law about cutting greenhouse gas emissions, and that the Paris climate treaty should be ratified by mid-2017 at the latest. Apart from that, work on the strategy of the fight against climate change will soon start, she stated at an event in the Embassy of France in Belgrade.

Božović added the materials needed for ratification were already prepared by the ministry and that the procedure can start as soon as the new government is formed. The Paris Agreement foresees the inclusion of aforementioned efforts into measures in energy, agriculture, transport and infrastructure, provides for their sustainability and competitiveness, and investments aren’t endangered by natural disasters, she said.

Ratification of the treaty and a serious approach open the way for Serbia to tap the Green Climate Fund and the Adaptation Fund of the United Nations Framework Convention on Climate Change (UNFCCC), and other international and bilateral funds set by the European Union and its member states, the ministry said. The implementation of the agreement includes wastewater facilities, increasing the level of recycling, waste separation and construction of landfills. Božović said the government will strengthen cooperation with local authorities and help establish public–private partnerships, introduce measures for energy efficiency and utilization of renewable sources.

The ministry is initiating a project in cooperation with the United Nations Development Programme to identify possibilities for the reduction of emissions in municipal units.

„Aware of the fact that the implementation of the treaty, alongside the ministry’s full dedication, demands the readiness of local authorities, we initiated a project in cooperation with the United Nations Development Programme to identify possibilities for the reduction of emissions in municipal units, with direct participation of local authorities. The ministry and the UNDP aim to identify sources, secure funds and launch the realization of priority activities. Our idea is to look for potential technological solutions in innovations in Serbian science and economy,“ the state secretary said.

Ambassador of France Christine Moro praised Serbian efforts in the fight against climate change and reminded that candidate countries for the membership in the European Union are expected to set an example in the segment. She expressed hope a new government will soon be able „to start the process of ratification in the new assembly.“ Moro added France ratified the treaty in the lower house of the Parliament of France on May 17 and that 175 out of 195 members of the UNFCCC signed the document. She stressed the condition for it to come into force is that at least 55 countries with a share in emissions of at least 55% ratify it.

Ambassador of Morocco Abdellah Zegour said the next, 22nd session of the Conference of the Parties to the UNFCCC will be held in Marakesh in November. He added his country’s goal is to reach a share of 40% of energy production from renewable sources. Morocco has in development a solar park of 100 MW.

Borka Jeremić, advisor to the UN resident coordinator, said a new framework for the development partnership with Serbia from 2016 through 2020 foresees support to the government in capacity building for the fight against climate change and natural resources management. State secretary Stana Božović said the value of projects supported by the programme is USD 11 million (EUR 10 million), where EUR 2 million will be provided from the Global Environmental Facility, EUR 4.5 million from Serbia’s future environmental fund of Serbia and the rest from donors.