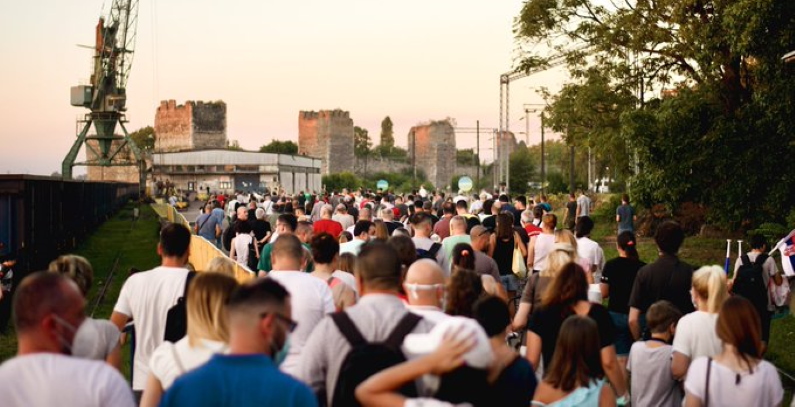 The inhabitants of Smederevo are worried about the dust coming from the Železara steel power plant and its transportation activities, which prompted a demonstration to urge the authorities to act against air and land pollution.

Several hundred people have gathered in Smederevo, east from Serbia’s capital city Belgrade, demanding from the government to react to air pollution from local steel plant Železara. Organizers claim the facility owned by China-based Hesteel, also known as HBIS, is breaking the law.

Protesters temporarily blocked the railway and the Danube river port used by the company for the transportation of iron ore. Local activist group Pokret Tvrđava and other environmentalists said Hesteel’s operations generate toxic dust and that the situation has worsened since the 2016 takeover.

Locals accuse the firm of failing to introduce measures to avoid air pollution and other damaging effects. Pokret Tvrđava organized the rally also to express opposition to the decision to allow Hesteel to use the port for 25 years and the possibility to extend the license for another quarter of a century. Organizers said the Chinese company doesn’t need to pay anything for the service.

Nikola Krstić from Pokret Tvrđava announced private lawsuits would be filed against HBIS in cooperation with villagers from Radinci, situated next to the steelworks. In the latest incident, the area around Železara was covered by black dust.

It resembled steel scrapings. Environmental authorities later identified it as siderite, from which iron is produced.

The activist stated workers were threatened with dismissal if they join the protest. Krstić said there was blackmail and pressure on the organizers’ families, but didn’t name anyone allegedly responsible.

Aleksandar Jovanović Ćuta from the Defend the Rivers of Stara Planina movement noted the gathering followed a protest in southeastern Serbia against an illegal small hydropower plant. Last week activists damaged the facility’s piping, which was buried under the riverbed in the Rakitska river in the village of Rakita.

All citizens in Serbia should come to the barricades to protect their interests and resist “crimes against nature and the people”, he stressed and vowed to spread Rakita everywhere. Jovanović revealed the organizers asked for a meeting with Chinese Ambassador Chen Bo.

The European Division of the United Nations Educational, Scientific and Cultural Organization (UNESCO) Chair in Bioethics said in the villages around the plant, ore precipitation of black and red color can be seen. It violates the UNESCO Universal Declaration on Bioethics and Human Rights, as well as other conventions on human rights to which Serbia is a signatory, the statement adds.