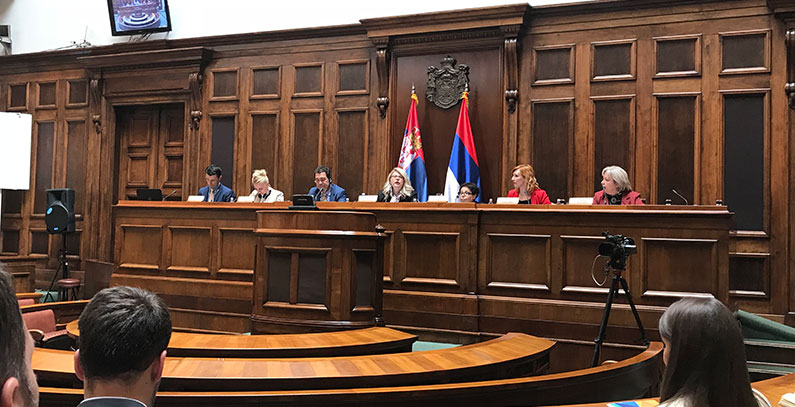 Members of parliament (MPs) can be generators of political will, which is a prerequisite for energy transition, while the Serbian Parliamentary Energy Policy Forum is an ideal example of good practice in this area, the forum participants said at the fifth meeting.

At the 5th meeting of the forum entitled “Energy and Climate Change – Policy Coordination,” organized in cooperation with the Open Regional Fund for South Eastern Europe – Energy Efficiency (ORF-EE), the Belgrade Fund for Political Excellence, the RES Foundation and the Foundation Heinrich Böll, interactions between the energy and climate change policies were discussed.

Tomić told the participants that German Foreign Minister Heiko Maas, who opened the conference, said that the energy transition to sustainable energy is the most important global challenge, which is why the international community has opted for the implementation of the Paris Agreement and the United Nations 2030 Agenda for Sustainable Development.

“It was underscored that if these agreements are not implemented around the world, a major crisis, or new wars, are ahead of us. Energy transition is a necessary condition for stability and peace in the world,” Tomić said.

She noted that energy transition is becoming a business, and so first-movers will be rewarded with the greatest benefits.

“The German experience shows that energy transition does not only involve energy and environment ministers, but also those dealing with education and health, and really the entire cabinet,” she said.

Sekulović: Parliamentarians are key to the solution

Jasna Sekulović, ORF-EE project manager, noted that a project implemented with the Network of Schools of Political Studies in SEE identified political will as the key condition for energy transition.

In 2010, public dialogue was launched to include all stakeholders relevant to these policies.

“At the time I recall parliamentarians asking “What do we have to do with energy efficiency issues?”. But things have changed, as evidenced by the Parliamentary Forum. We are particularly proud that all the parliaments of the region have opened doors for other stakeholders in this process, for business, media, ministries, and that the project has proven that parliaments are an excellent platform for a dialogue on policies related to sustainable energy, climate change, and energy efficiency,” Sekulović said.

“Based on previous experience, I am convinced that MPs and parliaments can be generators of political will, which is a prerequisite for energy transition. By working in parliament and acting in public, they can help the development and implementation of advanced energy policies,” she said.

Buschle: Even EU countries are looking for a way to replace coal

Deputy Director of the Energy Community Secretariat Dirk Buschle said that energy transition in Serbia is mostly related to coal which has become a toxic natural resource, not only due to environmental pollution and global warming but also in regulatory terms, as a majority of coal-fired power plants in Serbia do not meet EU standards.

Coal is also problematic economically, as heavy dependence on one resource is not good, while investments are shrinking.

The question of what comes after coal is not bothering Serbia only, but also members of the EU, and Germany, Poland, France, and Belgium are all wondering how to carry out energy transition if coal has no future, he said, noting that renewable energy sources are the best solution for Serbia, as they are not a matter of choice but a reality.

Serbia needs to ride the wave of changes in the region, he said.

According to him, transition must be seen as a chance and Serbia should not wait for someone in Brussels to make a decision, but should rather get involved in making decisions.