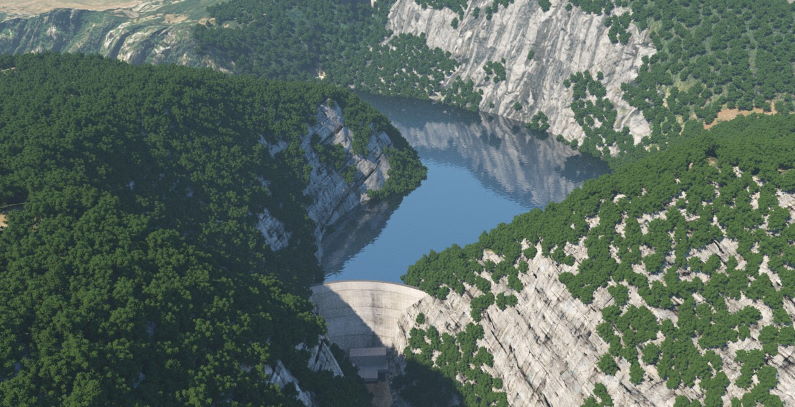 State-owned power producer Elektroprivreda Crne Gore got the right to build Montenegro’s first hydroelectric station in four decades and run it for up to 60 years. Hydropower plant Komarnica will cost EUR 260 million to EUR 290 million, more than in the previous official estimate.

Minister of Economy of Montenegro Dragica Sekulić handed the concession document for the construction of hydropower plant Komarnica to Chief Executive Officer of Elektroprivreda Crne Gore (EPCG) Igor Noveljić. She said more than 150 GW of green energy has been installed in the past four years and that 552 MW has been contracted including the current deal.

The first large hydropower project after four decades is planned to have 172 MW and an annual output of 213 GWh. The dam at the Lonci site should be 171 meters high and the reservoir’s surface is set to reach 818 meters above sea level.

The projected capital expenditure and annual production are sufficient for the profitability assessment at this point of development, the Government of Montenegro claims

Noveljić compared the future facility on the river Komarnica to the existing 342 MW Piva hydroelectric station, which has a 220-meter dam. The plan dates back to 1976. The CEO added one thousand workers would participate in the construction and that one hundred people would be employed when it’s done. In his words, the state-owned utility will make efforts to mostly hire locals from Šavnik and Plužine.

The government lifted the estimated cost to between EUR 260 million and EUR 290 million, prompting criticism. During the public consultation period, social justice organization ASP – Akcija za socijalnu pravdu said it is unacceptable to leave out details, particularly whether value-added tax is included in the calculation, and pointed to the previous official estimate of EUR 246.5 million.

The ministry said the exact price would be determined during the procurement process and that further technical studies are due. The projected capital expenditure and annual production are sufficient for the profitability assessment at this point of development, it added.

A coalition of nongovernmental organizations demanded the minimum acceptable flow to be determined for the river downstream, to protect biodiversity and the local water supply and to analyze the environmental impact.

The government doubled the original maximum concession period to 60 years. According to the national strategy, hydropower plant Komarnica is supposed to come online in 2022.