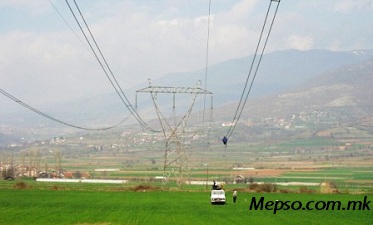 Electricity Transmission System Operator of Macedonia (MEPSO) officially marked the inclusion of reconstructed highline Skopje–Tetovo into the electric network in Jegunovce in the country’s northwest.

The length of 110 kV overhead connection is 48 kilometers and the total worth of the investment exceeds EUR 4 million, the MEPSO said.

The power line is set on 187 columns of which 158 new columns replaced the old ones that were in use for more than 60 years. Besides columns, new connectors, insulators, conductors and other equipment were installed. Substation Jugohrom in Jegunovce, near Tetovo, is also significantly modernized, the utility stated.

At the inauguration ceremony, mayor of Jegunovce Toni Koceski underscored the importance of the reconstruction of the power line and substations for factory Jugohrom Ferroalloys d.o.o. because it is one of the largest electricity consumers in Macedonia.

The World Bank funded the project, Energomontaža a.d. from Belgrade, Serbia, was the contractor, and technical supervision was conducted by a consortium of the Faculty of Technical Sciences Bitola, Stolb Bitola and Elnos Group from Banja Luka, Bosnia and Herzegovina.