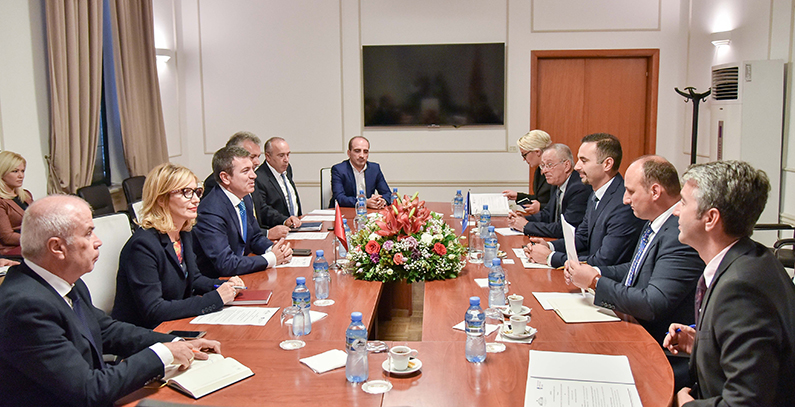 Ministers of Kosovo* and Albania have discussed the establishment of the common electricity market as well as Albanian power exchange in which Kosovo is ready to take part. They have also talked about the issues hampering the functioning of 400 kV transmission line between Kosovo* and Albania.

Minister of Economic Development of Kosovo, Valdrin Lluka, and Minister of Infrastructure and Energy of Albania, Damian Gjiknuri met in Tirana on October 3.

“We have decided to re-activate our working groups and move forward in market integration. We have also discussed the establishment of the power exchange in Albania, and Kosovo’s readiness to become part of it”, Gjiknuri said.

Lluka and Gjiknuri agreed to reorganize working groups for the integration of energy markets and intensify their work, and to appoint coordinators at the political level in the process.

At the meeting, it was confirmed that Kosovo electricity transmission system operator KOSTT will participate as a shareholder in the Albanian power exchange that is being established. Lluka said that a working group will discuss details.

The two ministers also discussed the problem of putting into operation the 400 kV transmission line between Albania and Kosovo and agreed to coordinate action on this issue.  The Kosovo*’s minister estimated that the transmission line is not operational for political reasons, due to the problems in relations with Serbia.

The Albanian minister said that Albania will support Kosovo* in this regard and strongly lobby at different forums and with European partners to remove obstacles, saying that this interconnection is crucial for the integration of two energy markets.

Almost all of Albania’s power is produced by hydropower plants, while that of Kosovo* comes chiefly from lignite coal. Both Kosovo* and Albania suffer power shortages due to insufficient output, ageing grids and theft.