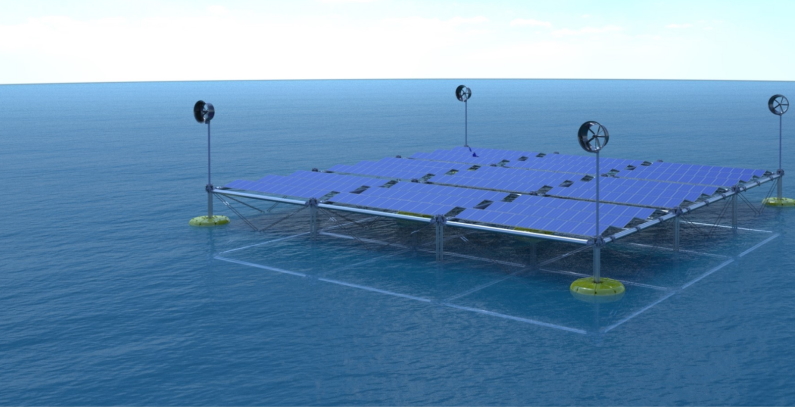 German SINN Power is about to showcase the prototype of a floating solar power plant and its hybrid system utilizing wind and wave energy in Crete, while another German company, BayWa, is said to be looking at possible projects for the technology in Greece.

Company BayWa AG is examining the Greek market for opportunities in renewables, Energypress has learned. It noted the company headquartered in Munich has already built several floating photovoltaic plants in the Netherlands. Furthermore, also without naming sources, the article adds there are other investors from Europe’s north considering the possibility to develop floating solar power plants, but it also points to the potential for hybrid systems in Greece including the technology.

Namely, as a World Bank’s study showed, hydropower plants can be upgraded with photovoltaics on their reservoirs for multiple benefits. But SINN Power GmbH just raised the bar as it presented its floating platform that combines solar panels, wind turbines and a wave energy system.

SINN Power is implementing the project in Heraklion in Crete. It has been studying wave energy conversion for several years in cooperation with the Heraklion Port Authority and other partners.

Now it called on solar panel manufacturers to test their equipment on its platform this summer. The Technical University of Crete and the Foundation for Research and Technology – Hellas participate in the pilot project and showcase.

SINN Power said it wants to commercialize the “complete off-grid energy solution” for communities that live near the coast by 2024 and to deploy it in other Greek islands. The structure withstands waves up to six meters high. Germany secured EUR 1 million for its development and the Schweizer Kapital Global Impact Fund AG invested in the endeavor.

EDP, Akuo could step in with FPV projects

Greek lakes and seas are considered ideal for hosting floating solar projects, according to the report on BayWa’s possible expansion. Both the Portuguese EDP, which recently signed a memorandum of cooperation in renewable energy with state-owned PPC, and French Akuo are active in the segment and operating in Greece.

Statkraft intends to build a 2 MW floating photovoltaic or FPV system at its 72 MW Banja hydropower dam in neighboring Albania. Government-controlled KESH is planning to develop a 12.9 MW facility in the north of the country.

The emerging segment of the solar power sector must be monitored for environmental and social impacts, according to a study by the World Bank

One of the advantages of such plants is that there are no costs for groundwork, land use licensing and buying or renting the property. According to the World Bank’s study, the global potential for floating solar power plants just on man-made reservoirs is at least 400 GW. In the case of large hydropower plants with dams, their electricity generation capacity can be matched by covering between under 1% and 4% of the reservoir with solar panels.

“The priority over the next few years should be to carry out strategic deployments of FPV at sites where it is already economic, while applying the ‘precautionary principle’ when it comes to possible environmental or social impacts. This may include initial limits on the portion of the water surface that is covered and efforts to avoid installations in the littoral zone near shore, where plant and animal life may be more abundant,” the document reads. Its authors warned the effects must be monitored and determined.

Integration of photovoltaics with hydropower is cost effective also because existing power plants are already connected to the grid and access is cheap. Furthermore, dry seasons with less water flow correspond to periods of high solar insolation and vice versa, so the two systems are complementary. The changes in solar radiation can be offset by fast-responding turbines, resulting in a stable and flexible combined output, particularly at pumped storage hydropower plants.

The panels’ shading eases water evaporation, while the water and cool air reduce the operating temperature of the photovoltaic equipment and provide substantial savings, researchers found.