Intersectoral cooperation in the Drina river basin discussed in Belgrade 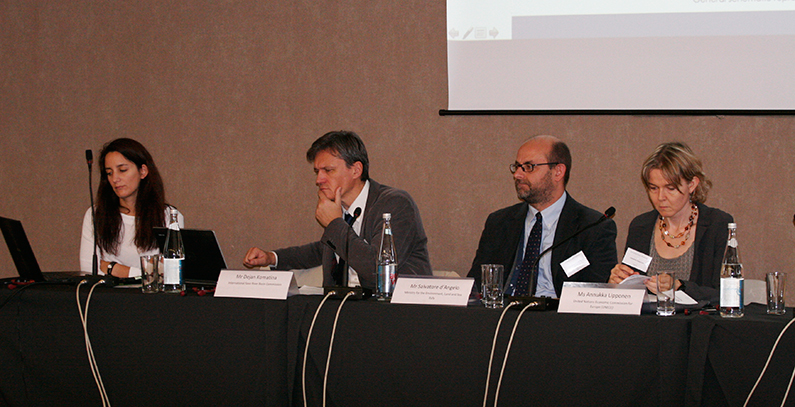 The international and domestic experts and stakeholders from the three neighbouring countries – Bosnia and Herzegovina, Montenegro and Serbia – gathered in Belgrade for the second workshop “Assessing the water-energy-food-ecosystems nexus and benefits of transboundary cooperation in the Drina river basin”.

The workshop organised jointly by the United Nations Economic Commission for Europe (UNECE), and the International Sava River Basin Commission (ISRBC), and hosted by the Serbian Ministry of Agriculture and Environmental Protection is a part of the project “Greening economic development through applying a nexus approach and identification of benefits of trans-boundary cooperation”.

The objective was, through the nexus assessment in the Drina basin, to identify inter-sectoral synergies that could be further explored and utilised. After that, it would be easier to determine policy measures and actions that could reduce tensions between sectoral objectives, avoid unintended consequences of resource management and resolve trade-offs between sectors.

The Drina basin project is carried out under the Convention on the Protection and Use of Transboundary Watercourses and International Lakes (Water Convention), which has developed a methodology to assess the Water-Food-Energy nexus in transboundary basins.

The Belgrade workshop took place on November 8-10, following the kick-off workshop held on April 21-22 in the Montenegrin capital of Podgorica.

The project is financially supported by the Italian Ministry of the Environment, Land and Sea. Its Senior Expert in Development Cooperation Salvatore d’Angelo expressed his full support to the three countries in application of the Water Convention’s principles.

Opening the event, Nataša Milić of the Ministry’s Water Authority reminded that all river basins in Serbia, with an exception of the Morava basin,  are trans-boundary. “This explains interest of the country to participate in international cooperation projects as well as to  facilitate cooperation in the Drina basin. Besides much needed cooperation in suppressing the effects of floods, the best way to protect the hydropower and agriculture activities in the Drina basin is by joining efforts of all three countries. Water is becoming increasingly scarce resource. Failure to protect and properly use the water can limit economic development in Southeastern Europe”, stressed Nataša Milić

In their overview, the international experts of the Swedish Royal Institute of Technology (KTH) Youssef Almulla and Eunice Ramos outlined that 60% of the Drina’s hydropower potential is still unused. Limited agricultural production and unexploited potential of eco-tourism and depopulation were among challenges, calling for reinforced implementation of the development policies, which were pointed out by international experts.

The basin of the 346-kilometre long river covers over 19,500 square kilometres. While Drina is not a navigable river, it has respectable hydro-logical influence, since it is a main contributor to the Sava River.

The main goal at this point was to facilitate a dialogue of officials and stakeholders on ways to employ synergies between the countries in the region covering the waterway of the Drina River.

They discussed ways to optimise flow regulation and further development of renewable energy potential, which is being seen as the main potential of the river. This would be accompanied by rural development, especially through modernisation of agriculture and production of organic food. At the same time, the participants emphasized the need to make sure the water quality is maintained, among other ways, through regulated solid waste management.

The three areas of cooperation were discussed in separate groups, in which experts brought deep insight into problems and offered some workable solutions.

The support for the project came also from the World Wildlife Fund (WWF), which underlined the importance of efforts to coordinate operation of existing dams. The move would have great importance for conservation of the river ecosystems. “Joint work helps in better defining and ensuring environmental flow which actually means adequate quantity, timing and quality of water flow with consideration of actual needs of ecosystems and communities. Even subtle adjustments in dam’s operations can significantly improve ecological conditions and support ecosystems and services they provide. These measures are of particular importance in biodiversity rich areas like Drina River Basin is,” said WWF’s Goran Sekulić.

Strengthening of cooperation, including further formalisation, could help develop into more regular dialogue and practice some of the findings and proposals from this project in the International Sava River Basin Commission (ISRBC). The riparian countries already cooperate on a number of issues in that framework.

Productive dialogue and solutions for hydropower, rural development and protection of waters

The hydro-energy experts from all three countries agreed that hydropower capacities were the most developed. They called for more cooperation between the hydropower plants (HPPs) to coordinate power production.

The basin has three major hydroelectric power plants, one in each of the three neighbouring countries. The one, in Montenegro, Hidroelektrana Piva (HPP Piva) is on Drina’s tributary Piva River and has the largest accumulation reservoir, called Piva Lake. The Serbia’s Hidroelektrana Bajina Bašta (HPP Bajina Bašta)  and the Hidroelektrana Višegrad (HPP Višegrad) in Bosnia and Herzegovina are operating further downstream.

The working group on rural development also noticed low levels of agricultural production and employment coupled with depopulation. Land fragmentation is seen as main problem preventing faster irrigation efforts, which are more advanced in lowlands. The organic farming is reported to be most actively promoted in Montenegro. On the other hand, smaller communities in the basin tend to keep traditional farming practices (grazing, mowing meadows and tending the orchards), which are important element of both organic farming and sustainable development.

The group for water quality was more focused on finding concrete cross-sectoral solutions, and reported a list of interlinked activities that would include all the stakeholders. As the first step, they proposed to build water treatment facilities, and in vicinity of the HPPs if possible. The parallel step would be preparation of landfills for disposing of solid waste extracted from the river bed near the HPP dams. To close the financial circle, the experts in the working group proposed that HPPs co-finance construction of water treatment facilities and landfill adaptation. This would help improve the quality of water, which would be then more suitable for irrigation without a prolonged treatment.