International Energy and Environment Fair (ECOFAIR) in Belgrade in October 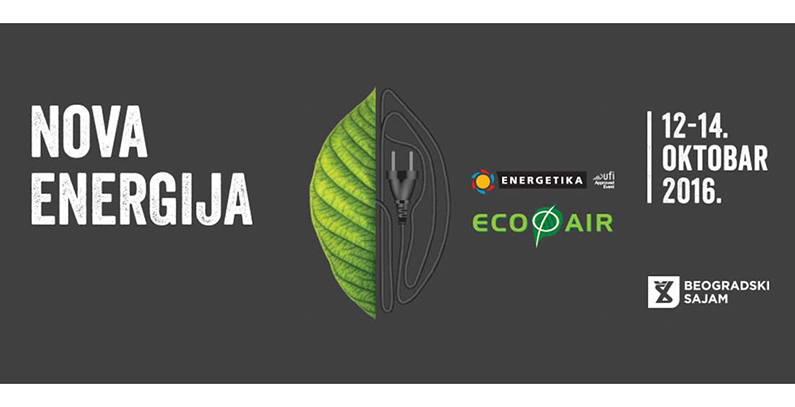 The 13th International Energy Fair and 14th International Fair for Environmental Protection and Natural Resources – EcoFair, will be held at the Belgrade Fair from October 4 to October 6, 2017. The business and educational slogan has remained unchanged – New Energy.

The Energy Fair is an annual and regional gathering of companies, corporations, enterprises, institutions and professionals in the sectors of electrical energy, coal, oil and gas, renewable energy sources, energy efficiency and mining.

EcoFair is announced as a manifestation that promotes the protection of the environment and natural resources.

The two events have been traditionally held at the same time with the idea to connect different energy sectors, including thermal and hydro power plants, power grids and distribution, mining sector, gas, oil, renewable and non-renewable energy sources, energy efficiency and green economy, with the protection of nature and environment, natural resource management, recycling industry, waste management and any technology that supports them, organizers said.

At least 200 direct and indirect exhibitors from Serbia and abroad and around 7,000 domestic and foreign visitors are expected at the fairs this year.

Last year, 150 exhibitors and company representatives and more then 6,000 visitors from 19 countries, 20 percent more then in 2015, participated and visited two fairs.

Conferences and debates are also important part of the fairs presenting an opportunity to discuss the most relevant issues in the filed of energy and environment for Serbia but also for the broader region, and to learn about various expert analysis.

The discussion on energy should help (re)defining energy priorities, regional sector cooperation and joint approach to the third markets, as well as the focus of scientific research, production and exploitation, distribution, transport, storage, use of natural resources and related legislative, but also the use of biomass, smart technology, and training for applying for European funds.

The organizers expect of discussions on environment to bring forward issues related to concrete results in the fiedls of environment protection, climate changes, waste treatment or recycling, as well as the EU programs, infrastructure projects and  circular economy.