Photo: US Ambassador Jeffrey Payat speaks at the mobile recycling kiosk project launch (US Embassy and Consulate in Greece) 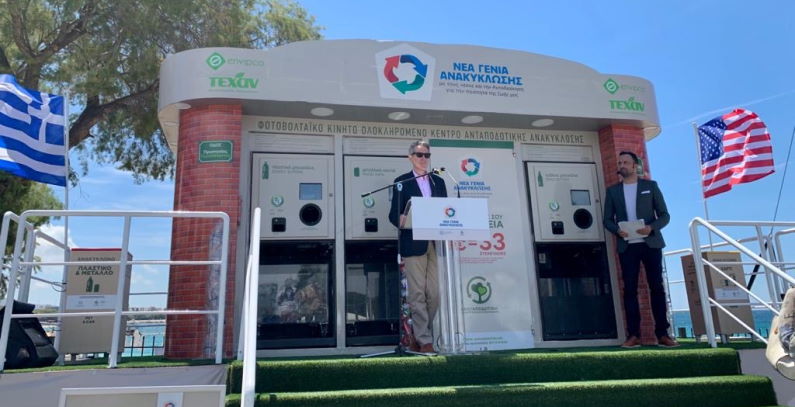 Envipco and Texan, which started the production of public devices for returning plastic, glass and metal packaging in Greece, launched their portable automated machine that runs exclusively on a photovoltaic system. The government in Athens is promoting public–private partnerships and it is about to detail an EU-funded program for local authorities worth EUR 2.5 billion.

An energy autonomous reverse vending machine was installed at a beach in Alimos in the South Athens region, marking the beginning of a roadshow which will include islands and end in early September. United States–based Envipco produced it in partnership with domestic company Texan at a factory inaugurated in December. Greece included the first-ever mobile recycling kiosk in a state program for beaches as it promotes public–private partnerships.

The device for plastic, glass and metal packaging was presented on World Environment Day. It issues coupons worth 3.3 euro cents per item which users can spend in a supermarket or donate to charity.

The portable system is powered exclusively by solar panels. It consists of three automatic machines. Envipco, which unveiled it in Greece at last year’s Thessaloniki International Fair, is a producer of high-tech recycling hardware.

The plant in the capital city’s northeast is its first outside the US. The investment was worth USD 8.5 million and it created 60 jobs.

The Ministry of the Interior has already launched a pilot project with one hundred reverse vending machines in five municipalities: Kallithea and Nea Smyrni in Attica, Ioannina, Nafplio and Andros island. They were picked for low recycling rates.

Theodorikakos: Municipal authorities have a unique role in environmental protection

Interior Minister Takis Theodorikakos stressed the unique role of local and regional authorities in protecting the environment. He added he and Prime Minister Kyriakos Mitsotakis are about to outline program for municipal governments worth EUR 2.5 billion, named after former Athens Mayor Antonis Tritsis.

The spending package is intended to raise employment by 40,000, according to the official. He added 10% of the funds would be allocated for solid waste management. The development scheme, mostly financed by the European Union, will include energy efficiency measures, sewerage and water supply.

A recorded message by basketball player Giannis Antetokounmpo was screened at the launch. The Greek NBA celebrity is the campaign’s ambassador.

“The kiosk can be easily transported to other beaches and even the islands, playing an important role in helping Greece to develop a culture of recycling and a true circular economy that maximizes the recovery and reuse of materials while reducing plastic waste in the Mediterranean. Last December, I joined the grand opening of Envipco’s manufacturing plant in Pallini, where the prime minister spoke about his bold plans to eliminate the use of single-use plastics by next year,” US Ambassador Jeffrey Payat said.